The premature retirement and replacement of coal-fired plants is a costly endeavour, potentially opening the door for widespread adoption of carbon capture and storage (CCS). For this to happen, substantial improvements in the cost of capturing CO2 from retrofitted coal-fired power plants is still needed, as well as significant revenue streams for the CO2, from enhanced oil recovery (EOR) and/or carbon taxes and the like.

CCS is the ugly and largely forgotten stepsister of CO2 mitigation, since it adds to cost and and decreases energy efficiency. But most climate change modellers still believe substantial capture and storage capacity is required to meet the primary objective of the Paris Climate Change Treaty, which is to keep the rise in global temperatures to 2 °C or less above pre-industrial levels.

CCS is the only technology to remove CO2 emissions from already-emitting sources such as fossil fuel-fired power plants and industry, including steel, cement and chemicals manufacturing.The International Energy Agency (IEA), for example, estimates that CCS will need to account for 32% of carbon dioxide (CO2) reductions by 2060 to avoid catastrophic climate change.

Globally, there are just 24 large-scale CCS facilities – by which is meant those capable of sequestering least 0.4mn metric tons (mt)/yr – in operation, under construction and completed but no longer operating, according to the Global CCS Institute (GCCSI), and 15 smaller-scale facilities with total CO2 capture capacity of another 2mn mt/yr. Roughly half of the large-scale facilities are in the US, while most CO2 is captured from natural gas processing plants for the purpose of EOR (see Table 1).

Only two of these projects presently capture CO2 in large quantities from coal-fired power plants: the Boundary Dam plant in Canada and the Petra Nova plant in Texas, both retrofitted with post-combustion technology.

A third plant, the Kemper County Energy Facility in Mississippi with pre-combustion technology, was scheduled to be online by now, but cost overruns and construction delays forced its capture component to be mothballed in June 2017.

According to Robert Mitchell, senior client engagement lead at GCCSI, 90 large-scale CO2 capture facilities need to be brought on-line each year for CCS to achieve its 32% share of global emission reductions in 2060 as targeted by the IEA.

CCS has been stuck in the pre-commercial stage of development for several years – the legendary “valley of death” thatlies between this stage and commercial deployment – because of relatively high costs and a lack of public financial support.

A large-scale CCS retrofit project to capture 1mn mt/yr of CO2 from a coal-fired power plant presently costs about $1bn, making them prohibitively expensive for private companies to construct without public support – whether via direct subsidy or through some form of carbon pricing scheme. Capture projects also add to operating costs and cause a 10%-30% energy penalty for the overall system.

A 2015 study by the US National Energy Technology Laboratory (NETL) found retrofitted CO2 capture was the largest component of the cost for electricity from a pulverized-coal (PC) plant at 75%; and 52% of the cost for a natural gas combined-cycle (CCGT) plant – hence, quadrupling and more than doubling their costs, respectively, reflecting the relative carbon intensity per kilowatt-hour generated.

In terms of cost of CO2 captured, this translates to an average of $56/mt for a PC plant and $71/mt for the NGCC.

For the sake of comparison, GCCSI estimates the cost of capturing CO2 from large-scale industrial emitters to range between $20/mt for a natural gas processing plant and about $200/mt for a cement plant.

Although repeated large-scale commercial development is the best way to achieve substantial cost savings for CO2 capture – and other technologies – costs can also be cut through detailed engineering studies of previous projects and greater economies of scale.

The Shand CCS feasibility study for another possible CO2 capture project in Canada, based on the retrofitted Boundary Dam coal-fired power plant and completed to the American Association of Costing Engineers (AACE) guidelines for a class 4 estimate, appears to have found significant cost savings.

At the same time, a technological advancement out of left field could potentially bring down the cost of CO2 capture even more, making CSS commercially economic even sooner. For example, Inventys, a Canadian company, has developed a solid CO2 absorption technology that it believes could cut the cost of capture to just $30/mt.

Inventys had a 30 ton per day pilot project for its technology start up in the spring of this year in the province of Saskatchewan – where the Boundary Dam and potential Shand CO2 capture project are located – in conjunction with the Canadian oil company Husky Energy.

If CO2 captured from coal-fired power plants is to achieve the needed costs savings to attract private investors, large-scale commercial development is required, and the price tag for that is extremely high. This is true even for governments in China, the EU, Japan and the US – especially when a vocal part of their populations question the value of CCS in the first place.

If the cost reductions in the Shand CCS feasibility study are realistic, private investors would need to obtain $55-$60/mt of carbon simply to break even on their investment, as transportation and storage costs would likely add between $10mt and $15/mt. This full amount would need to be covered by some sort of government support if the CO2 is destined for dedicated geologic storage, and $15/mt less for EOR – assuming a price of $50/barrel.

As of now – and surprisingly, given the climate change-denying ways of its president – the US government is the one closest to providing the needed support to push the retrofitting of coal-fired power plants out of the valley of death. The Bipartisan Budget Act of 2018, passed in February of last year, included a revamped 45Q tax credit that significantly boosts the amount of money available to companies for adopting CCS. But there is method in the seeming madness: from the Trump administration’s perspective, the primary purpose of the revamped 45Q tax credit was to support the US coal industry, not the environment.

The old 45Q offered a $10/mt tax credit for CO2 from a CCS project using EOR and $20/mt for dedicated geologic storage, to a limit of 75mn mtons. The revised 45Q gradually increases these tax credits to $35/mt and $50/mt, respectively, by 2026. The revamped tax credit applies for a 12-year period beginning on the date the CCS project comes online, and for an unlimited volume of CO2 stored.

Congressional science and engineering fellow with the American Association for the Advancement of Science in Washington, DC, Ryan Edwards said: "The new tax credits are the most significant policy incentivising carbon capture, utilisation and storage in the world today…. This is the first time we've had a policy in front of us that lets us seriously consider deployment on a large scale.”

However, to date, the new 45Q tax credit has failed to encourage positive final investment decisions (FID) for new commercial-scale CCS projects in the US. Not only are the new tax credits too small to make retrofit projects for coal-fired plants economic, but US plants tend to be relatively old, and hence close to their scheduled retirement dates, while the price of gas in the US is lower than coal, thanks to the shale revolution, especially when taking into account the higher energy efficiency rates of combined-cycle gas plants.

China to the Rescue

Despite the US being the global leader in CCS and the recent efforts by its government to kickstart commercial-scale CCS deployment, China could become the first country to make the retrofitting of coal-fired power plants economically viable. China is the world’s largest emitter of CO2, having overtaken the US over the past decade, with around half of its emissions coming from coal-fired power plants. This has contributed to horrific air quality issues in most of its cities.

China’s coal fleet is young, with two-thirds of its coal-fired plants built since 2005, and hence having three or four more decades of scheduled life. And unlike the US, China is rapidly becoming a major importer of gas, resulting in relatively high prices due to significant transportation costs – whether LNG or transcontinental pipelines – and rising concerns about security of supply in as geopolitical tensions mount.

According to the GCCSI, the Chinese government has made “significant progress over the past decade” promoting the development and deployment of CCS, despite likening its efforts to an iceberg, as they are generally not well publicised – the major exception being the national government’s “blue sky” programme to combat local air pollution. These efforts tend to be directives and incentives provided by various levels of government, while a national carbon market will provide significant price support in the future. But the country’s first large-scale CCS project, CNPC-operated Jilin Oil Field CO2-EOR, was not commissioned until 2018.

China has over a 1,000 coal-fired power plants, roughly half the global total, and according to the International Energy Agency (IEA), about a third of these plants are well suited for CCS, including being within 250 km of geologic storage.

To conclude, development of CCS for coal-fired power plants may be stuck in the pre-commercial stage, but it has a great deal of potential, with governments such as the US and China increasingly serious about encouraging large-scale projects. This will likely contribute to less global gas consumption in coming decades than generally expected. 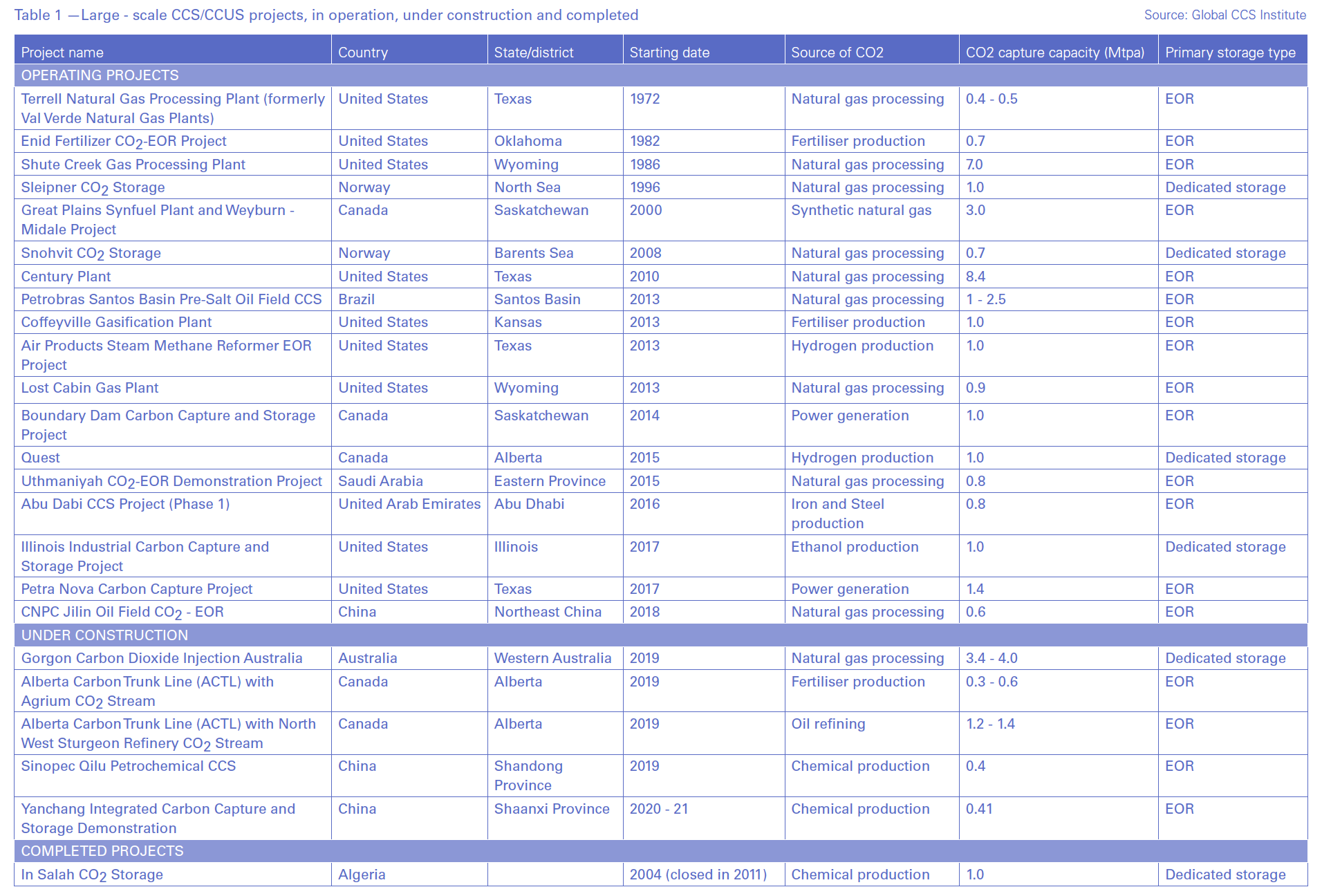