Glimmers of hope for carbon capture and storage [GasTransitions]

According to the report, “plans for more than 30 commercial facilities have been announced in the last three years. And projects now nearing a final investment decision represent an estimated potential investment of around $27 billion – more than double the investment planned in 2017. This portfolio of projects is increasingly diverse – including power generation, cement and hydrogen facilities, and industrial hubs – and would double the level of CO2 captured globally, from around 40 million tonnes today.” The reason for the “acceleration” are “stronger climate targets and investment incentives”.

Nevertheless, although “CCUS is up and running in some sectors”, it is still “lagging in the most critical ones”. CCUS has primarily been used in areas such as natural gas processing or fertiliser production, where the CO2 can be captured at relatively low cost. “But in other areas, including cement and steel, CCUS remains at an early stage of development. These are the sectors where CCUS technologies are critical for tackling emissions because of a lack of alternatives.”

It’s a familiar refrain we have heard about CCUS for a long time. The IEA has for years now stressed that CCUS is a “key pillar” of any net-zero emission strategy, but not enough is being done to make it happen.

A similar message was given by yet another CCUS report, put out by the U.S.-based Center for Global Energy Policy of Columbia University, “Net Zero and Geospheric Return: Actions Today for 203 and Beyond”.  “Carbon capture and storage (CCS) must play a central role” in climate action, according to this report, in particular in two ways:

The International Energy Agency (IEA), IPCC, and many other groups estimate CCS projects must mitigate 1.5 Gigatonnes per annum (Gtpa) by 2030 to stay on a 1.5 C increase climate trajectory—an increase by a factor of 35 from today, notes the report.

The Center for Global Energy Policy observes that “the 8,000 kilometers (5,000 mi) of existing CO2 pipelines in North America must be expanded by an additional 35,000 kilometers (21,000 mi) to maximize emissions reduction. Similarly, industrial hubs and clusters, now under development in Europe, China, and the Middle East, can accelerate the deployment of CCS at reduced cost. More storage sites must be assessed and approved, and options like CO2 shipping must be explored for costs, opportunities, and technology requirements.”

Both the IEA and the Center for Global Energy Policy appeal to governments to take the necessary measures to make CCUS fly.

Mitsubishi Shipbuilding has started work on developing a carbon capture system for ships. Together with Kawasaki and Nippon, Mitsubishi is conducting test operations and measurements for a small scale ship-based CO2 capture demonstration plant, the company said in a press release. 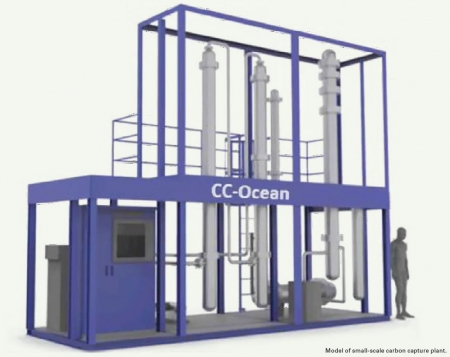 The project, called "Carbon Capture on the Ocean" (CC-Ocean), which is supported by the Japanese government, involves converting the design of an existing CO2 capture system for onshore power plants to a marine environment, and installing it on board an actual ship in service. The system, which is expected to become operational in 2022, will be installed on board a coal carrier for Tohoku Electric Power Co., operated by "K" Line.

Through operational and performance confirmation in an actual marine environment, Mitsubishi Shipbuilding will then determine the system specification requirements as a marine-based device and will also consider how to make the plant more compact.

The experiment is the first of its kind in the world. The knowledge gained will be used for future development of technologies and systems to capture CO2 from the exhaust gases of marine equipment and ships, said Mitsubishi. The company said the captured CO2 can even be recycled for use as a new source of CO2 for enhanced oil recovery (EOR) processes, or as raw material in synthetic fuel.

New research suggests that bigger and better electrolysers will be key to producing green hydrogen at a lower cost than fossil fuels, and Australia’s abundance of cheap solar means this cross-over point will come ‘sooner rather than later’.