Renewable energy sources are witnessing a significant expansion in the European energy landscape, much to the concern of the European gas community. The power market, seen as a guaranteed demand source, is falling victim instead to low-cost renewables; and the traditional European energy companies are worried that their infrastructure assets will become stranded.

Russian Gazprom is no exception. The company’s domestic gas sales and exports cover mostly pipeline gas with a small share of LNG. It is most likely that European gas will remain the main source of income, at least till 2035 when three quarters of its supply contracts expire. Gazprom’s adaptation to rapidly changing energy environment seems therefore unavoidable, and the faster, the better.

The development of carbon-free hydrogen is part of Gazprom’s “Green Strategy” in the EU and is expected to complement the company’s sales of compressed and liquefied natural gas for road and maritime transport. Hydrogen is an ecologically clean fuel, which may be used for vehicles, where it can substitute for fossil fuels and can thereby successfully compete with electric cars.

With the EU looking for making drastic reductions in greenhouse gas emissions (GHG), hydrogen may be regarded as an option, since it can be produced from gas without releasing additional CO2 emissions. According to the former head of Gazprom Export Alexander Medvedev, speaking in January shortly before his departure, the full-scale extraction of hydrogen from methane should be a part of the European decarbonisation process and accordingly, help the EU meet its 2050 climate targets.

Previously used chiefly as a feedstock for chemical industry, hydrogen is henceforth predicted to play a more important role in the European energy system. According to the Hydrogen Roadmap for Europe, which the European Commission (EC) released in February 2019, it is the best choice for achieving a so-called “deep decarbonisation” (to cut more than 80% of CO2 emissions) from such key segments as transportation; heating and power for buildings; industrial feedstock demand; and power generation.

As the transport sector is the biggest emitter of GHG emissions, the EU is looking at ways to electrify transport. To this end, it has set up several transport programmes. HyFIVE project is the first at-scale European project in fuel cells and hydrogen technology, which has already deployed 185 fuel cell electric vehicles, including six hydrogen refuelling stations in the UK, Denmark, Germany, Italy and Austria.

The Hydrogen Mobility Europe (H2ME) project aims to complement the HyFIVE Project and will significantly expand the European hydrogen vehicle fleet and the number of refuelling stations across the region. The JIVE (Joint Initiative for hydrogen Vehicles across Europe) and H2BusEurope are also boldly conceived in their ambitious scale and timing. JIVE-2 which started in January 2018 envisages around 300 fuel cell buses being deployed in 22 EU cities by 2020, making the EU a global leader in hydrogen and fuel cell technology. The H2BusEurope Programme, part of the EC-funded Connecting Europe Facility (CEF), seeks to bring around 600 fuel cell buses on to European roads and H2 filling stations, with Denmark being the largest contributor. 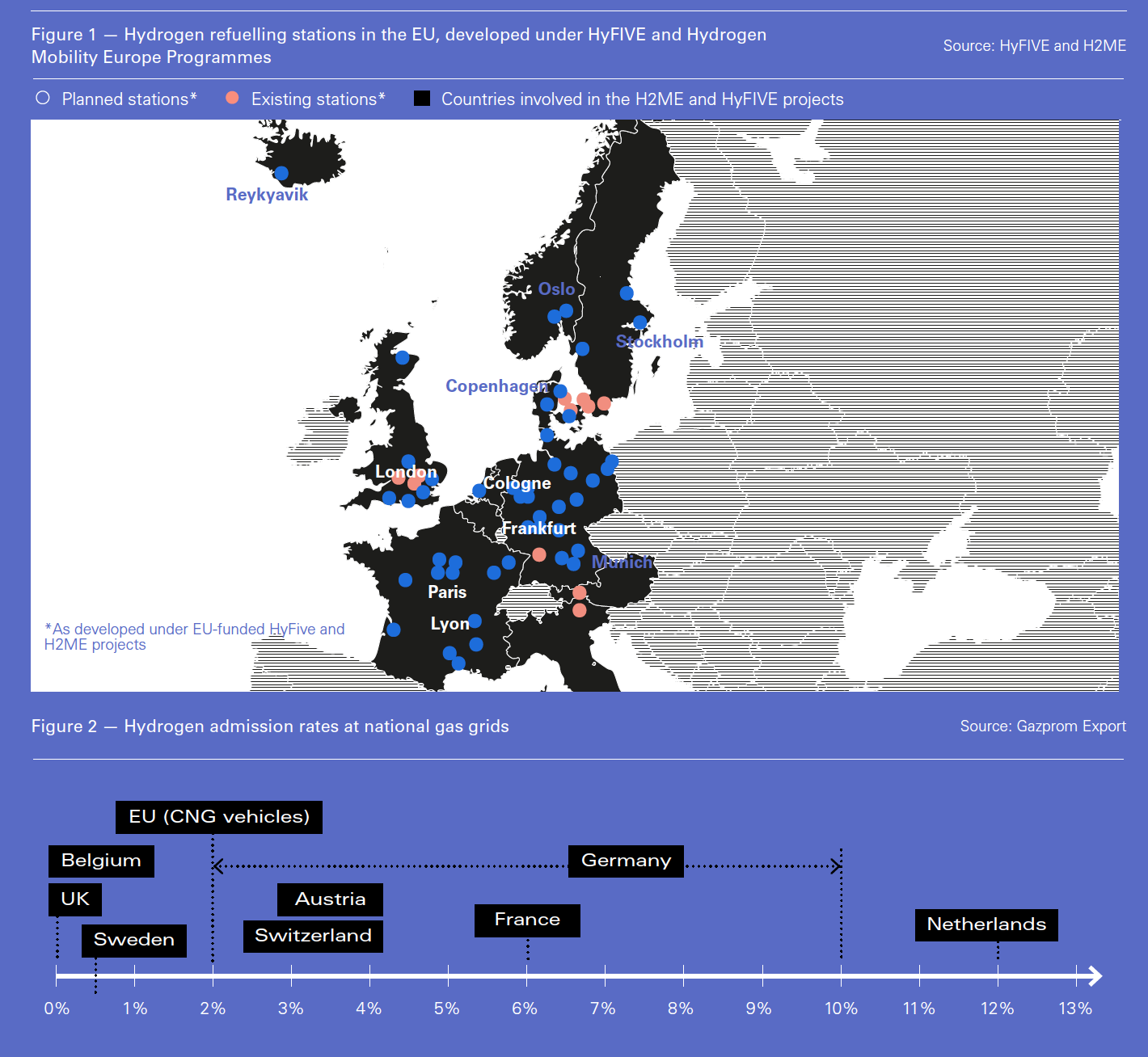 The expansion of hydrogen-powered vehicles and associated infrastructure in Europe have made it much easier for Gazprom to penetrate this market. Its hydrogen-based strategy has two prongs: power generation and transport; and grid injection, mixed with methane.

The main objective here is to shift the EU energy market further away from carbon-intensive coal in power generation and petrol/diesel in transport to more ecologically sound gas. According to the International Energy Agency, in 2018 all major EU energy markets witnessed gas demand growth in the power generation sector. Since 2015, gas has regained the position of some years before thanks to the improved economic conditions of gas-fired plants compared with those running on coal, but also because of the reduction of coal plants and a more aggressive EC policy that has pushed up the price of emissions trading certificates.

To keep this trend on its upward gradient, Gazprom senior executives miss no opportunity for promoting gas as the most ecologically valuable, cost-effective and easy-to-use fuel; one that can ensure a smooth transition to a zero-carbon economy.

Thanks to its versatility, hydrogen can be used successfully across the transport, heating, energy industry and power sectors.

But Gazprom senior executives see the use of hydrogen not in a pure form, which is rather costly in transport sector, but as an additive to gas. Adding hydrogen can eradicate harmful GHG emissions from the entire gas chain – from production to the final consumer – and the company has already started thinking about the economic advantages of such a mixture.

The CEO of Gazprom Alexei Miller has emphasised that there are no negative consequences of adding hydrogen to gas: the gas-hydrogen mixture can be safely pumped into gas grid and transported to final consumers, where it can be directly used in power generation and industry. In the longer term, Gazprom also sees hydrogen as an additive to hydrocarbon fuels for internal combustion engines. Adding hydrogen to natural gas engines has proved to be beneficial in terms of improving combustion properties, while also ensuring a significant drop in polluting emissions (NOx, CO2), especially in lean-burn operation.

Gazprom has already patented and has been testing a method of producing hydrogen from methane that uses adiabatic conversion: the resultant methane-hydrogen mixture meets the company’s own needs at compressor stations. According to a professor at the energy department of the Russian state university of petroleum and gas Vladislav Karasevich, the methane-hydrogen mixture has advantages.

It uses less methane to run the turbine, as the mix is a fifth hydrogen; but CO2 emissions are reduced by 30%, which makes the use of these technologies interesting for projects in places where carbon emissions carry a price.

Europe’s hydrogen pipeline network is 1,500 km long and covers part of Germany, France and the Benelux countries. The expansion of the hydrogen pipeline system to the south and east of the European continent requires huge investment, which may pay off but only with correspondingly large volumes of hydrogen. So the question of demand is an important one to get right.

The EU has a well-developed gas transmission and distribution system across the continent, but converting the gas grid to hydrogen is also expensive, so this is only going to make sense if it is seen as a long-term option. Many experts agree that technically, the natural gas grid could successfully accommodate pure hydrogen – produced mainly from renewable feedstock – with minimal or even no modifications. However, such claims still require further research, and the question of the cost of these modifications remains crucial for transmission operators.

In this context, blending existing supplies of gas with hydrogen, produced either from fossil fuels with CO2 capture or from renewables, might be a cost-effective option. According to Gazprom Export, gas that contains up to a tenth hydrogen by volume can be easily transported through the existing gas trunk system without any risk of damage to the infrastructure.

But if Gazprom’s strategy of adding hydrogen to the gas chain is economically viable, it may face some important technical and regulatory constraints. First of all, hydrogen admission rates vary greatly across the national gas grids in the EU. Whereas in Germany, H2 concentration in natural gas is up to 10 vol%, it is only 4% in Austria and Finland. Countries with lower tolerances might stand in the way of Gazprom’s plans, unless they change their national laws.

Other legal and administrative barriers that could hinder the injection of hydrogen into the EU gas grid include regulatory complexity or the lack of rules altogether as the question is still premature.

Gazprom’s attempts to decarbonise its gas by blending it with hydrogen also present risks for its current gas supply contracts, wherein are spelt out the gross calorific value, the permitted ranges for impurities, and so on. The “natural gas quality clause” may lead to financial penalties from Gazprom’s buyers, but also lead transmission system operators to reject some or all of the gas. So removing these legal and technical barriers will also require a substantial degree of cross-border co-operation.