Can you tell us about Eurogas and its membership and what are your main aims?

Eurogas is a European trade association that advocates for the role of gas as part of the solution to achieving the EU’s carbon neutrality goals. Our members – traditional gas majors, including Shell, Total and Eni, distribution companies and national associations – believe that gas plays a central role in delivering energy transition and decarbonisation. We recognise the potential of all types of gases in the future energy mix: natural gas, biogas, biomethane, and hydrogen.

What is the role of gas in a carbon-neutral Europe and what challenges does it face?

Gas – natural, renewable and decarbonised – is vital across all sectors of the economy and is one of the few energy sources able to become entirely carbon neutral. It is essential to deliver successful energy transition and build a carbon-neutral society of the future.

Achieving the EU’s ambition of a carbon neutral economy by 2050 requires fundamental restructuring of our energy systems. This includes interconnecting the electricity and the gas systems, integrating them with other economic sectors, while supporting Europe’s industrial competitiveness and citizens’ prosperity.

How can this role be delivered post-2030 in light of the Green Deal? 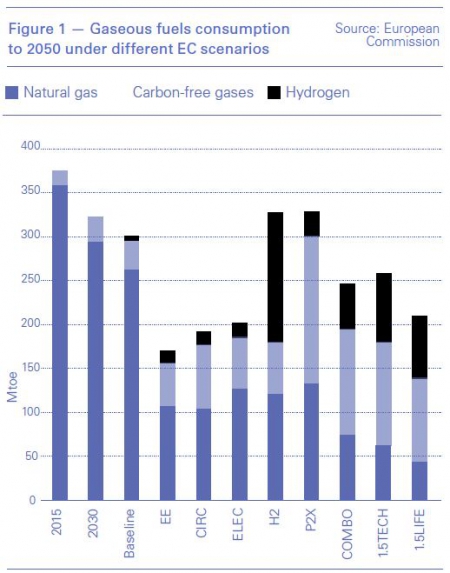 We see the Green Deal as an opportunity for Europe to become a global leader in achieving carbon neutrality. To deliver this ambition, the EU has to set up the right policy framework that recognises the role of gas in delivering the decarbonisation of the EU energy mix.

In this regard Eurogas supports carbon neutrality in the EU by 2050, but we believe that the EU will need to deploy specific targets for renewable and decarbonised gas volumes to make sure that gas plays its role in achieving that objective.

EU’s estimates of future gaseous fuels consumption to 2050 under various scenarios are shown in Figure 1. Eurogas will be publishing the results of its own study soon, demonstrating that gas – natural, decarbonised and renewable – can help achieve ambitious emissions reductions by 2030 at a lower cost.

The EU will not be able to achieve carbon neutrality by 2050 without decarbonising the molecule. On the way to climate neutrality, it has to set a viable path for 2030 and beyond.

Switching from coal to gas in power generation, replacing inefficient oil heaters with gas, using LNG in marine transport and for goods vehicles will significantly contribute to meeting the EU’s increased emissions reduction target by 2030. Further down the line, the deployment of renewable and decarbonised gases – biogas, biomethane and hydrogen – will be indispensable for meeting the 2050 targets .

The International Energy Agency (IEA) recently said: “The oil and gas industry must balance short-term returns with long-term licence to operate.” Do you think the gas industry shares this opinion?

Over the recent years, we saw a fundamental shift in the business mindset of the oil and gas companies. One can hardly find a purely ‘natural gas company’ any more as the business portfolios were diversified to include renewable assets.

More broadly, the gas industry today also ensures Europe’s leadership in the industrial production of low-carbon technologies: electrolysers, anaerobic digestors, LNG engines for ships and pyrolysis equipment. This all means job creation and wealth in Europe as we progress through the energy transition.

It means there is an understanding that only a cost-effective combination of all decarbonisation options can deliver the 2050 climate neutrality ambition. Eurogas believes that gas – natural, renewable and decarbonised – must be part of the solution.

How should the gas industry respond to the climate threat?

There is a wide range of things that everyone – from industries and governments to citizens – should do in response to climate change. I think the real question here is what everyone does.

The gas industry supports the EU’s 2050 climate ambitions and is already providing solutions to decarbonise the EU energy mix. Addressing methane emissions is another right and responsible action to take in this direction.

To this end, Eurogas has recently joined the ‘Methane Guiding Principles’ initiative – a voluntary partnership of industry and civil society organisations aimed at reducing methane emissions across the natural gas supply chain, from production to end consumer. It includes cooperating on advancing strong performance across value chains, improving transparency and data accuracy, and positively engaging in dialogue on methane regulation with policymakers.

There are many who believe that the activist NGOs have gained the upper hand in Brussels and are now portraying natural gas as the new coal. What is Eurogas’ opinion on this? How is the gas industry making its case?

Eurogas meets and speaks with NGOs and think-tanks. Agora Energiewende and CERRE, for example, share our point of view and advocate for specific targets/volumes for renewable and decarbonised gas.

Eurogas is pragmatic – we know that you cannot electrify your way to a carbon-neutral society. Electricity alone is simply not able to achieve this and will only take you so far. Decarbonised and renewable molecules will reach the parts of the system that electricity cannot.

What do you expect from the EC with regards to natural gas decarbonisation and how would new legislation affect your members?

When it comes to law-making, we expect the EC to set out a clear pathway for renewable and decarbonised gas towards 2050, with ambitious and realistic intermediary targets for 2030 and 2040. A credible plan for scaling all decarbonisation options is instrumental. It must include natural, renewable and decarbonised gas in combination with carbon capture use and storage technologies. As for our members, they are already making the innovative gas technologies available and ready to deliver on decarbonisation.

A way forward for gas is considered to be smart integration of electricity to enhance energy efficiency. What are your views on this?

Gas is an ideal partner for electricity. The unique features of both energy systems can be complementary to each other and can contribute towards developing cost-efficient technological solutions.

Such possible solutions to the interaction between electricity and gas, and between different types of gases, have been suggested by the EC (Figure 2). 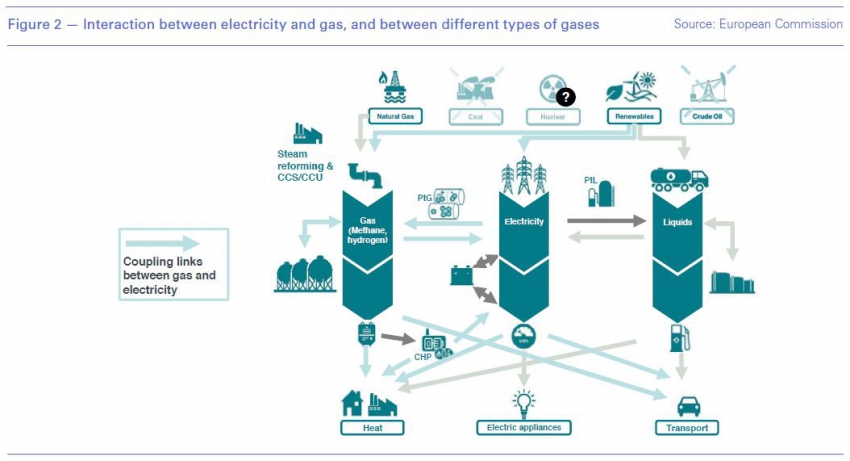 Gas technologies provide flexibility solutions to the electricity sector: by storing excess renewable electricity as gas via power-to-gas and by lowering demand via (micro/mini) combined heat and power appliances (CHP) and fuel cells. Gas infrastructure is another solution to the electricity system flexibility as it can balance fluctuations in the power grid efficiently. Renewable gas can provide electricity backup to variable renewable sources such as solar and wind.

Hydrogen is key to a decarbonised future in Europe. What is its strategic role in energy transition and is this the future for gas?

Many EU countries recognise that hydrogen will be part of the future energy mix: Germany is drafting a hydrogen strategy with a target for hydrogen use in transport, heating and industry. There are projects in France, The Netherlands, Belgium, Spain, Portugal, to name just a few.

It means there is a wide recognition that hydrogen is necessary for the transformation of our energy system toward carbon neutrality To deliver this ambition, power-to-gas technologies, as well as blue hydrogen production processes such as steam methane reformation or methane pyrolysis, complemented by CCUS, need to be further developed.

Example roles of hydrogen in decarbonising major sectors of the economy, proposed by the Hydrogen Council, are shown in Figure 3.

It is therefore vital to ensure finance and regulatory support for these promising technologies to deliver our climate neutrality ambition. 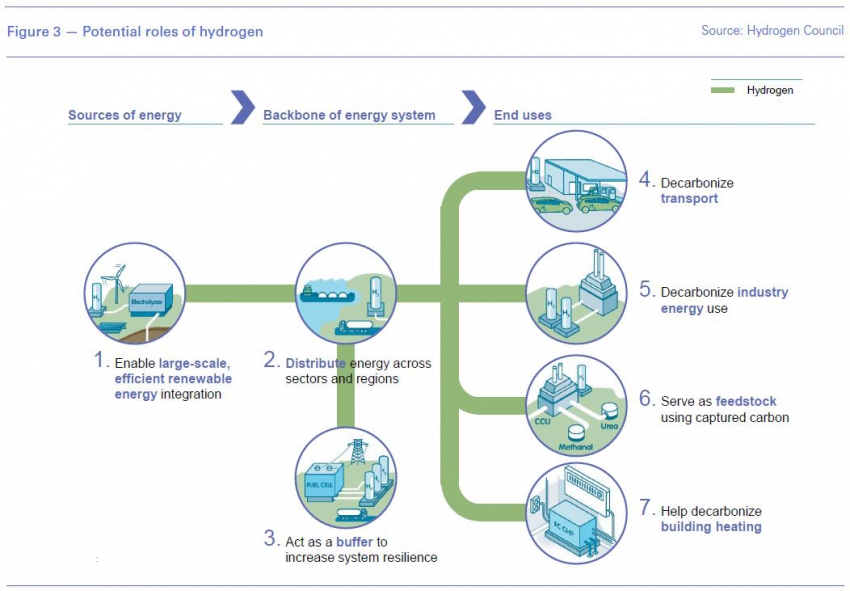 How can policy and the regulatory framework help hydrogen’s future in Europe? What does Eurogas do to achieve this and how can its members help deliver the energy transition?

In 2017 the European Commission launched the European Battery Alliance to develop efficient batteries production in Europe. This is a commendable initiative, aimed at developing strong value chains within the EU.

In 2020, we believe it is time to take a similar approach to all forms of renewable and decarbonised hydrogen. Devising a hydrogen strategy is a great opportunity to signal Europe’s commitment to decarbonised gas as a necessary fuel for a competitive industrial sector.

Such strategy should also provide an opportunity to develop our own innovative manufacturing base in the technologies to decarbonise gas and the wider economy. This includes hydrogen ready turbines, engines, heating appliances, fuel cells and electrolysers.

Supported by our members, Eurogas is engaging with EU policymakers to develop such an initiative. Eurogas urged the EC February 3 to ensure that any hydrogen initiative covers all forms of renewable and decarbonisted hydrogen, not just hydrogen produced from renewable electricity. Eurogas furthermore calls for the provision of "financial and regulatory support for the most necessary and most promising technologies" to achieve climate neutrality by 2050.

Working with policy makers is key and Eurogas is well placed to influence policy. What are you doing to achieve this?

It is crucial that the energy transition is delivered with as much public support as possible. To this end, our main aim is to foster dialogue and cooperation with all stakeholders: policy makers in Brussels and across the EU, civil society, media, industries, but also our peers within the gas industry. Only by speaking to each other will we find ways to overcome obstacles and develop solutions for the benefit of the EU and its citizens.