EU Should Be 'Less Worried' about Gazprom: Sefcovic

The European Commission published February 1 its second State of the Energy Union Report, which reviews progress made since the publication of the first such report in November 2015. The latest report, and accompanying documents, can be found here.

The report finds that “Europe is well on track to reach its 2020 targets” in terms of greenhouse gas emissions, energy efficiency and renewable energy.

"The Energy Union is about more than energy and climate; it is about accelerating the fundamental modernisation of Europe's entire economy, making it low-carbon, energy and resource efficient, in a socially fair manner. Now that a large part of the relevant legislative proposals are on the table, 2017 should be the year of implementation,” said commission vice president Maros Sefcovic.

In a lunchtime press briefing February 1, Sefcovic was asked if he was concerned that Europe is now importing more gas than ever from Russia, and that Gazprom now wants to use the TAP pipeline.

He replied that, given reduced EU energy consumption and greater gas-on-gas competition, the EU “should be less worried [about Gazprom] than in the past” but noted that the anti-trust probe into Gazprom over its alleged dominant position in eastern Europe “is still pending.” 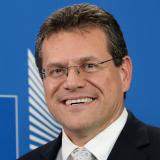 “We have learned the lessons of the past: we have more [gas] interconnectors, and gas storage is stress-tested. We have a more liquid gas market. We may even be in a stronger position.”

“My message to importers is, you should be open to stiff competition. We want to ensure there are no strings attached,” said Sefcovic, adding the EU would continue its gas diversification efforts: “I’m confident that by 2020 we will have Caspian gas in Europe.”

With Australia and the US now competing to be the world’s largest LNG supplier, said Sefcovic, the EU seeks “fair prices and fair competition” and “under these conditions, we should be less worried than in the past” about dominant gas suppliers.

Asked about a flare-up in the eastern Ukraine conflict January 31, he said that the commission was in regular contact with the Russian energy ministry and separately Ukrainian energy ministry: “We’re monitoring gas flows and, despite the harsh winter, everything works fine.”

He said that transport capacity was operating at 50%-60%, although it was not clear if this referred to transit capacity across Ukraine, or overall Russian export capacity to Europe.

Reuters meanwhile reported February 1 that physical flows through Opal fell by 27mn m³/d to 64mn m³/d, in the wake of a successful challenge by Poland to stop Gazprom from using more of Opal's capacity. In October, the commission authorised Gazprom to use 80-90% of the Opal's 35bn m³/yr capacity from January 1, up from the previous limit it had set of 50%. Warsaw got the European Court of Justice to suspend that decision, so since the December auctions for January capacity, there have been no auctions for February capacity. A Dusseldorf court is still considering the matter.

Sefcovic, who starts a tour of EU member states February 3, also noted in the context of the latest Energy Union report: “Renewable energy is now cost-competitive and sometimes cheaper than fossil fuels, employs over 1mn people in Europe, and has reduced the EU fossil fuels imports bill by €16bn ($17.3bn).” He did not break down that figure, however, which may in part be due to the fall in global oil prices and glutted world LNG market.

Rosneft Profits Surge in 2019 Despite Challenges