The first Mozambique LNG plant has the green light; the second is likely to follow soon, given the financial and upstream capabilities of its partners. What does that mean for projects in the US? Their business model is complicated as the developers are not also the LNG marketers.

The future is looking even more uncertain than ever. LNG is a long-term business and LNG plants coming on stream by 2025 will be operating in an unimaginably different world by 2045, as the zero-carbon goal nears.

Hydrogen is a gleam of hope, prolonging gas demand. Electrons used to be the only game in town from the 2030s where zero-carbon purists were concerned; but serious consideration of this relative new-comer has put the spring back in the step of pipeline operators over the last year or so.

Biogas and biomethane will also work alongside fossil gas, gradually replacing it but never needing to eliminate it, providing enough forests can be planted and more uses found for carbon to leave the world with a net zero carbon economy – by 2050 in the case of the UK, thanks to a final gesture by its outgoing prime minister, Theresa May.

This will come at a cost, perhaps as much as £1 trillion, according to finance minister Philip Hammond. But closing coal by 2025 is likely to happen. The country has had a record number of coal-free days this year already and it is still only June. And yet the population carries on with life as before.

But getting rid of coal from the power mix in Germany and elsewhere in the European Union is a longer struggle, and the European Commission has had to set up an initiative to manage the social distress that the transition to low carbon will entail in a number of countries. What will replace it?

All these demand uncertainties put developers and their customers in an awkward situation. The supply side is also uncertain, but they know that just over the horizon there is another slew of Qatari LNG projects for which financing and partnerships would be welcome but perhaps not essential; and more – perhaps a lot more – Russian LNG.

And the developers are looking over their customers’ shoulders at a spot price that has seldom been so low, either in Europe or in Asia. This is a signal that it would be perverse to ignore, although low prices are what the gas industry needs.

True, most of the LNG delivered to Asia is still sold on Brent indexation but the froth on top, the spot market, does send a clear signal that markets are glutted. European storage could be full by August, several months earlier than usual, helped by month-ahead prices that have not been so low in many years.

One can expect extended maintenance periods, shut-ins and some write-downs upstream too perhaps – just as the European LNG importers suffered when their capacity, booked and paid for on a long-term basis, was idle earlier this decade, just at a time when FIDs are needed.

One can note that several prominent US projects have announced eye-catching deals, with buyers lined up like Anglo-Dutch Shell in the case of Next Decade’s Rio Grande; and French Total – soon of course to be the lead partner in the Mozambique plant, as well as Novatek’s partner in the Arctic – in the case of Tellurian’s Driftwood.

But Shell, like BG before it, knows that developers are keen to advertise their projects and get them off the ground. The first liquefaction capacity deal is therefore the cheapest, if the buyer is a credible company.

And Total’s $500mn investment in Driftwood also costs it nothing if no final investment decision (FID) is taken. Tellurian is now gunning to take FID at the end of the year, a little later than expected. So these agreements are no guarantees of future construction.

Meanwhile the so-far dependable technology deployed at Cheniere’s Sabine Pass and Corpus Christi terminals has given no cause for alarm as train after train comes on line.

The traditional risks of upstream operations and downstream markets were formerly solved by long-term, oil-indexed take or pay contracts and nobody doubted that there would be enough gas demand to buoy up prices, in a captive market where end-users took what was sold to them without much complaint.

These 20-year contracts persist to this day, underpinning new projects, even if the indexation has changed a little and now coal is in the mix. But the offtakers will find it hard to do back-to-back deals with customers as the cost of entry into the gas market is falling all the time. Demand is there globally, and indeed growing, but it is also fragmenting. 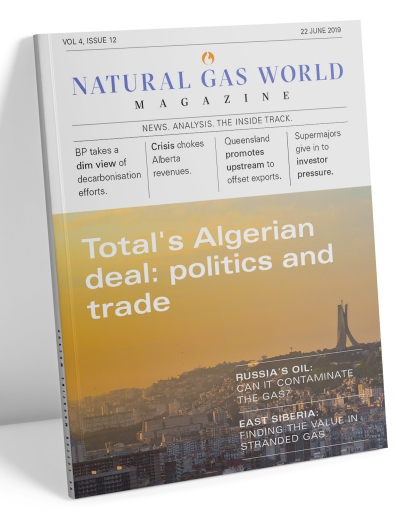 New technology, such as plug-and-play LNG to power applications; floating LNG import terminals; ISO containers that allow liquefied natural gas to be trucked to an end-consumer without a pipeline or boil-off; well-head mini-liquefaction plants – all these make long-haul pipeline construction projects such as the Southern Gas Corridor (SGC) appear relics from a bygone age even before they are completed. LNG is of course also bunker-ready and easily downloaded from the terminal and uploaded into the waiting vessel without any middlemen.

Even Bulgaria is eyeing LNG purchases. And NGW understands that major gas consumers in Greece are also planning to build an LNG import terminal of their own. Both these countries will be connected to the SGC. Will this Washington-Brussels-backed megaproject be a $40bn white elephant or a key part of Europe’s supply security? The future was much simpler back then.

Shell Withdraws From US LNG Project