COP26 a mixed bag for Biden [Gas in Transition]

The COP26 UN Climate Conference wrapped up on November 13, with a deal reached that saw some language watered down from initial proposals, but which nonetheless marked progress compared with previous positions.

For the US, the summit marked a turnaround from the tenure of former president Donald Trump, who took the country out of the Paris climate agreement, and rolled back environmental regulations brought in by his predecessor, Barack Obama. Trump’s successor, Joe Biden – who previously also served under Obama as vice president – has brought back certain Obama-era environmental policies, and promptly brought the US back into the Paris Agreement after taking office at the start of 2021. 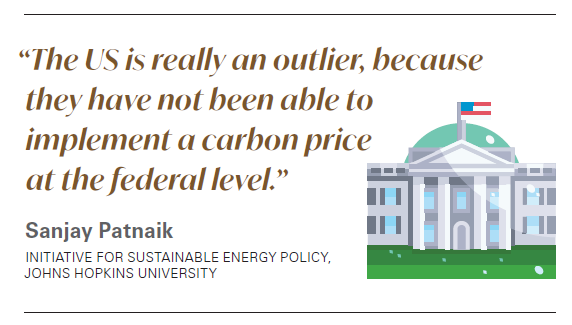 At COP26, Biden sought to accelerate his climate agenda further still and position the US as a leader in the fight against climate change. However, he has already come under fire from environmental groups for not taking a more aggressive stance when it comes to clamping down on fossil fuel development, among other initiatives, in order to bring down greenhouse gas (GHG) emissions more rapidly. Biden’s more moderate approach comes as no surprise, especially given the constraints he faces at home when it comes to pursuing his agenda. And despite this, the US has taken certain steps forward at COP26, though it still has a long way to go if it wants to be a leader on climate change.

Some of the commitments that emerged from COP26 had been expected, such as the formal launch of the joint US-EU Global Methane Pledge, which had first been unveiled in September. Countries signing up to that initiative – a number that has now risen to over 100, representing 70% of the global economy – are committing to a collective goal of slashing global methane emissions by at least 30% from 2020 levels by 2030.

Other announcements from COP26 came as more of a surprise, with an agreement unveiled between the US and China to collaborate more closely on climate action.

“I think this was more unexpected than other announcements, especially given the rivalry of the US and China in so many other ways,” the director of the Center on Regulation and Markets at the Brookings Institution, Sanjay Patnaik, who is also a fellow for the Initiative for Sustainable Energy Policy at Johns Hopkins University, tells NGW. “But it's in the spirit of what president Obama had already negotiated with the Chinese before the Paris Agreement, so it seems that they were able to successfully revive that relationship on climate,” he adds.

Patnaik says that the other essential development for him – which had come right before the COP26 summit started – was the US-EU agreement to negotiate a carbon-based deal on steel and aluminium trade by 2024. The two parties said this would be the world’s first such agreement.

“I think it's a good step in the right direction, but it's not something I think most observers would have expected,” Patnaik says.

On top of these agreements and commitments came the Glasgow Climate Pact itself, eventually agreed by all 197 countries following protracted negotiations, to mixed reviews. Notably, some of the language initially proposed was watered down in the final agreement, with the pact stating that the use of unabated coal be “phased down” rather than “phased out” following an intervention by India. Meanwhile, the pact did refer to a “phase-out” of “inefficient” fossil fuel subsidies, and while this is likely to lead to future conflicts over which subsidies should be considered inefficient, it also marks the first time fossil fuels have been mentioned in a UN climate declaration.

“I think the language on ‘phasing down’ unabated coal and inefficient fossil fuel subsidies is significant even if it was watered down substantially. But at least fossil fuels are finally mentioned in an international climate agreement after 25 years of COPs,” says Patnaik. “I believe that it will accelerate the elimination of coal as a main fuel for power generation (which has already been taking place due to market forces) around the world. For the US, this is actually an opportunity since the US produces a lot of natural gas, which is a substitute fuel for coal with a lower carbon footprint and which was not included in the ‘phase down’ language,” he continues.

“However, in the medium to long term I also expect natural gas to get more pushback during these international climate agreements and the elimination of subsidies (if it is implemented by countries) will likely also start affecting demand for natural gas negatively,” he says.

Now that COP26 is over, Biden is trying to spur his climate agenda by introducing new legislation as soon as possible. Here, however, he is already running into obstacles. In mid-November, he signed the $1.2 trillion bipartisan infrastructure bill into law, which includes around $100bn worth of investments into energy, power and water infrastructure. However, the “Build Back Better” bill, which contains $550bn worth of climate change investments, has been held up by opposition from certain Democratic lawmakers in both the House of Representatives and the Senate, after Biden had initially sought to pass both bills at the same time.

A notable opponent of the bill is Democrat Joe Manchin, US senator for coal-producing West Virginia, who has pushed back against the Biden administration’s more ambitious climate proposals, and whose stance can present a challenge in a Senate divided 50-50. Indeed, one major initiative Manchin opposes is the introduction of a carbon tax. And Patnaik sees the absence of a US carbon tax as a major roadblock to the country’s efforts to position itself as a climate leader.

“The rest of the world is moving very rapidly on introducing carbon prices, and they especially have been doing so since the Paris Agreement,” he says. “The US is really an outlier, because they have not been able to implement a carbon price at the federal level,” he continues, adding that this would be “the most efficient and the best way to transition to a low-carbon economy”.

Currently, Patnaik considers it “quite unlikely” that the US will be able to bring in a carbon tax, which he sees as a problem for the country in terms of its credibility and commitment if it wants to achieve its decarbonisation goals. He believes there are other levers that Biden does have at his disposal, though, such as financial market regulation, which can be used to reinforce existing market trends.

“To give an example, the transition away from coal to natural gas has been happening in the US for quite some time, and it was really market forces, because natural gas is cheaper, and it happens to be less carbon intensive,” he says. “If some market trends are reinforced through regulations and disclosure requirements, those trends will be hard to reverse, regardless of who comes in next [as US President].”

Indeed, achieving changes that are difficult to roll back could be particularly appealing after recent years, in which Republicans have sought to undo Democrat-led measures and vice versa. The process is currently ongoing, with Biden undoing Trump’s rollbacks of environmental regulations, and the US Environmental Protection Agency (EPA) having proposed new methane rules for oil and gas producers in the wake of the country’s commitment to the Global Methane Pledge.

For Biden, the challenge is to achieve something more lasting, which cannot subsequently be undone by a successor.