Since the end of the Soviet Union, the development of some of the Caspian Sea’s substantial oil and gas reserves has been stifled by territorial disputes between the five littoral states. All but Iran are former members of the USSR.

Azerbaijan, Kazakhstan and Russia have divided the northern Caspian among themselves through bilateral agreements based on median lines, allowing them to push ahead with some major projects. Other areas of the sea remain contested, though, with Azerbaijan, Iran and Turkmenistan all having competing claims. But there have been indications in recent years that those three countries are finally adopting a more pragmatic approach to Caspian politics.

One such indication came last month, when Azerbaijan and Turkmenistan announced a memorandum of understanding (MoU) on joint development of the long-disputed Dostluk oil and gas field. Dostluk or Dostlug, meaning “friendship” in the countries’ respective languages, was formerly known as Kapaz by Baku and Serdar by Ashgabat. It was discovered by Soviet geologists in 1986, but was overlooked during the economic malaise that followed the end of the USSR. 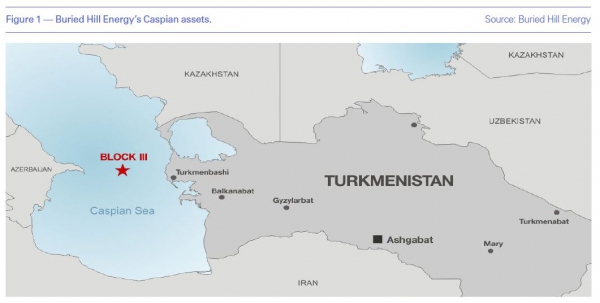 Turkmenistan awarded a 25-year production-sharing agreement in 2007 for Block 3, containing Dostluk, to Cyprus-registered Buried Hill Energy. According to its website, Buried Hill shot a 2-D seismic survey at the site in 2008, followed by a partial 3-D seismic survey in 2012. The first survey was temporarily halted after a stand-off with an Azeri gunboat.

Buried Hill states it is “awaiting a political resolution before it can continue with full appraisal and development” at Dostluk. The company declined to comment to NGW on the implications of the latest MoU.

More work is needed to assess Dostluk’s potential, but evidence suggests it is well worth drilling. The field is on trend with the prolific Azeri-Chirag-Gunashli oil project off Azerbaijan, which delivered 477,000 barrels/day last year. While Buried Hill has not commented publicly on its resource potential, a confidential company report dated 2012, obtained by NGW, places its 2C resources at 1.36bn barrels of oil and 2.5 trillion ft3 of gas. The field could potentially flow 300,000 b/d of crude, Buried Hill estimates.

Dostluk is one of several Caspian projects that have failed to make headway because of the territorial dispute. Another is the Alov block, awarded by Azerbaijan to a BP-led group in 1998. BP tried to survey the area in 2001, but its vessels were forced off the site by Iranian gunboats. The UK major’s contract eventually expired in 2016.

Prospects for these projects have improved somewhat in recent years, following the signing of a landmark convention by all five of the Caspian’s littoral states in 2018. The accord established zones of jurisdiction and fishing rights and barred foreign military from the region. But it did not address how the sea’s oil and gas resources should be carved up. And in any case, Iran has held out on ratifying the deal.

Even so, the convention demonstrated an increased willingness among the Caspian neighbours to make concessions. After the talks, National Iranian Oil Co and its Azeri counterpart Socar went on to sign a MoU to develop Alov.

While the deal between Azerbaijan and Turkmenistan is a clear sign of progress, its significance should not be overstated.

“The MoU is a positive step in the right direction – a political blockage has finally been removed,” Kate Mallinson, director of London-based Prism Political Risk Management, tells NGW. “However, to get to commercial production will take a long time and involve lots of complex negotiations between the two governments and commercial players.”

In its 2012 report, Buried Hill said it had reached a farm-out deal with an unnamed “supermajor” that was awaiting approval from Turkmen authorities. Buried Hill is likely to need technical and financial assistance to take the project any further. But international oil companies are scaling back their exploration activities, in response to depressed market conditions. Some like BP, a dominant player in the Caspian, have axed exploration budgets in order to invest more in renewables.

Some have suggested that the MoU may have positive implications for long-delayed Trans-Caspian Pipeline (TCP) project. This may be wishful thinking. The project has long been opposed by Russia, which wants to protect its market share in Europe. The Caspian convention enables countries to build subsea pipelines without consulting all littoral states, but others can challenge such projects on the basis of their environmental impact. Russia has already indicated it might use this clause to block TCP. And as previously noted, Iran has not ratified the convention anyway.

What is more, any progress at Dostluk or TCP will only be possible if Turkmenistan shows flexibility in negotiations – a willingness to give ground. But the isolationist central Asian state has a penchant for being highly distrustful of its neighbours, and of foreign investors, and this is likely to hinder development.

Azerbaijan, meanwhile, will prioritise delivering more of its own gas via the Southern Gas Corridor rather than taking volumes from Turkmenistan. It has extra supply at hand, including in deeper reservoirs at BP’s Shah Deniz field and at the Total-operated Absheron field.

There are also commercial obstacles. The long distance between Turkmen gas and Europe would make it less competitive in an increasingly saturated market. Southeast Europe gained a new import option at the start of this year with the launch of the Krk LNG terminal in Croatia. A year earlier Russia completed the second TurkStream, supplementing the other pipelines that carry its gas to Europe.

There are other projects on their way, including a second Greek LNG terminal and a potential EastMed pipeline that would ship Israeli gas.

Furthermore, European gas demand may not justify any extra import capacity. In its latest Stated Policies Scenario (STEPS), reflecting governments’ existing announced policy intentions and targets, the International Energy Agency (IEA) estimated that the continent’s consumption would never again reach the level it did before the pandemic. Falling indigenous output means imports will still see healthy growth over the next five years, but then they will stagnate and begin contracting.