Azerbaijan reported finding more hydrocarbons in the Caspian Sea in late March, after BP and its Azeri state-owned partner SOCAR finished drilling a well to a depth of nearly 7,200 m. The discovery comes at an opportune moment for Azerbaijan, ahead of market tests due to take place this summer to determine whether or not to expand a pipeline that carries the country’s gas to south Europe.

SOCAR said on March 24 it had made the ultra-deep gas and condensate discovery with BP at the Shafag-Asiman block, following 14 months of drilling. SOCAR did not disclose estimates for the find’s size, and BP is yet to announce the result itself, and did not respond to a request by NGW to comment. However, Azeri president Ilham Aliyev hailed the discovery as a potential boost for the Southern Gas Corridor (SGC), the network of gas pipelines that carries Azeri gas to Turkey and Europe.

In 30 years of cooperation with BP, Azerbaijan’s biggest foreign investor, “many projects of global importance have been carried out,” the Azeri leader said in a statement. “Today, we are working on several new projects together ... one is the development of the Shafag-Asiman prospect, where the drilling of the first well has already been completed with good results.” 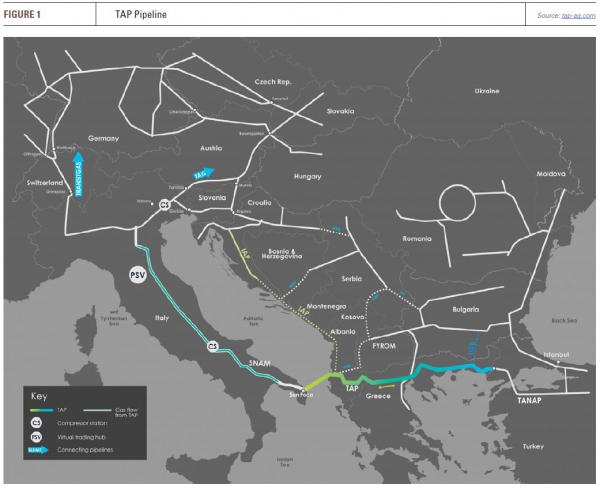 Aliyev said the gas and condensate reserves would “contribute to the growth of our proven hydrocarbon reserves and, consequently, to the energy security of our country and many other countries. Our proven natural gas reserves can contribute to the Southern Gas Corridor.”

SGC consists of the South Caucasus, Trans-Anatolian (TANAP) and Trans-Adriatic (TAP) pipelines, the latter of which was commissioned only in January. It had flowed 1bn m3 of gas by mid-March and boasts an annual capacity of 10bn m3. BP, SOCAR and the pipeline’s other owners are discussing plans to double this to 20bn m3.

Potential gas customers will be able to submit binding requests for this extra capacity during market tests scheduled for this July. But gas demand in Europe took a hit last year from the coronavirus pandemic, and forecasters have lowered their long-term forecasts in light of the energy transition gaining momentum. This raises questions about how much extra import capacity will be necessary.

The International Energy Agency (IEA), for one, warned in October last year in its Stated Policies Scenario that European consumption would contract from 606bn m3 in 2019 to 598bn m3 in 2025, 570bn m3 in 2030 and 536bn m3 in 2040. A decline in indigenous supply will mean the continent’s imports will nevertheless rise by a further 16bn m3 over the next decade. But existing infrastructure is sufficient to cover this growth, and decline will set in in the 2030s.

The TAP consortium does not see the energy transition as a threat to gas, however.

“As the EU transitions to a low-carbon future, natural gas will continue to play an important role in Europe’s energy mix,” TAP’s commercial team tells NGW. “The intermittent nature of renewable energy sources makes natural gas a perfect partner for renewables, by enabling the long-distance transport and storage of energy. Europe’s gas infrastructure is adaptable to Europe’s future energy needs.”

What is more, the gas carried by TAP “increases liquidity, therefore boosting competition,” the consortium said.

While the ill-fated Nabucco pipeline project was dogged by concerns about available supply, there is more than enough gas to justify a TAP expansion. It has been suggested that other countries like Israel, Russia and Turkmenistan might provide some of the gas. But Azerbaijan alone had some 2.8 trillion m3 in proven gas reserves at the end of 2019, but produced a mere 24.3bn m3 that year.

“I think the reserve base alone would be sufficient to boost output. Azeri production is still significantly lower than countries with smaller gas reserves,” Richard Gorry, managing director of JBC Energy Asia in Singapore, tells NGW. “Competitiveness is a more complicated question. Azeri gas has generally been tied to oil. Presuming the country continues to index to oil then the question is do buyers see oil prices rising at a greater pace than gas hub prices? If yes, they may look less favourably on Azeri gas and vice versa.”

“Of course, security and flexibility also need to be considered,” he noted. “Pipelines offer relatively good security of supply but may not allow for flexibility. Buyers may consider LNG to offer more value in this regard as the amount of LNG available through short-term or spot contract increases.”

There are also prospects for a further expansion in Azerbaijan’s gas resources, beyond BP’s flagship Shah Deniz field which supplies gas for SGC. BP is also embarking on several new exploration projects besides Shafag-Asiman, including at the offshore D-230 and Shallow Water Absheron Peninsula (SWAP) block. But progress has been slow.

At Shafag-Asiman, for example, BP was awarded exploration rights in 2009 and it took until 2015 for the company to acquire and interpret 2D and 3D seismic data. The firm was planning to drill the first exploration well in 2016, but had to postpone the plan because there was not an available rig. BP had to wait until 2019 before the Heydar Aliyev semisubmersible rig became available. Earlier it was used to drill a well at the Total-operated Absheron project. There was a further delay because of bad weather.

“The delay in exploration activity is mainly due to the unavailability of rigs rather than the lower oil prices,” Rystad Energy analyst Swapnil Babele tells NGW, pointing to similar postponements at BP’s other projects.

At the SWAP area, BP is still waiting for the Satti jack-up rig. The unit arrived in Azerbaijan in June 2019 but had to undergo upgrades. The UK major stated in August 2020 that it was still waiting for these upgrades to be finished, and there has been no update since. Rystad estimates that drilling will commence at planned wells at D230 in the latter half of 2021.