All the approvals required to develop the Midia gas development project are currently being obtained, said BSOG adding that, assuming they are secured in 2017, it will take a further two years to build the offshore platform, drill development wells, lay gas pipes, and construct a gas treatment plant. It awarded front-end engineering last November to UK based consultancy Xodus. 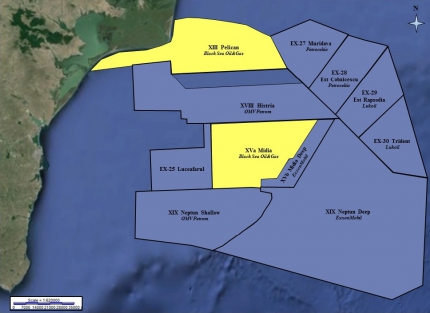 BSOG has a 65% operating interest in XV Midia and XIII Pelican Block in Romania’s Black Sea. Other partners are Italy's Gas Plus, and Petro Ventures Europe. The Ana and Doina gas fields – with contingent resources of 320bn ft³ – are some 100 km offshore Romania on the  XV Midia block; they were discovered in 1995 and 2007 respectively by the licence's previous operator Sterling Resources which divested to Carlyle in 2015.

OMV-Petrom and ExxonMobil drilled seven exploration wells between mid-2014 and early 2016 on their XIX Neptun Deep block, to follow up on their 2012 Domino-1 discovery of gas reserves estimated at 1.5 to 3 trillion ft3. Partners are looking at a potential field development early next decade.