The Energy Community secretariat said July 18 that an EU-funded study has confirmed the financial viability of the south gas interconnector linking Bosnia-Herzegovina (BH) with Croatia.

The secretariat said this represented "an important step towards realisation of the interconnector," the aim of which is to establish a new supply route for Bosnia-Herzegovina that could diversify and bolster its gas supplies. It added that the pipe project is planned to be commissioned by 2023, having received the status of Energy Community project of mutual interest (PMI) in 2016. Currently BH is dependent on gas imported from Russian giant Gazprom, which has to transit Serbia. The project's backers are state-owned BH-Gas and the Croatian state-owned gas grid operator Plinacro.

The Energy Community groups non-EU Balkan states, such as BH, with the EU-28, of which Croatia is that bloc's newest member.

Fahrudin Kulic, a mechanical engineer and energy expert working for USAID, in a slide presentation July 2 said that current contracted gas supplies are not sufficient for Bosnian capital Sarajevo's peak demand needs, and therefore two new interconnectors into the country were needed. He said options included a capacity enhancement for its existing pipe from Serbia, or a duplicate pipe along the same route, or brand new pipe from Serbia on the one hand; and from Croatia an interconnector entering Bosnia-Herzegovina either from the north, or west, or south on the other hand.

Among the pluses for the south gas interconnector, he said that if the Ionian Adriatic Pipeline (IAP) is built, it would provide BH with direct access to Caspian gas, via the TAP pipe due to be built by 2020.

Construction of the 'south' pipe would start 2021 and end 2023 if developed, he said.  A decision to invest in either that project, or the 530-km IAP project which would connect with TAP and then run up the western coast of the Balkans, is still some way off. 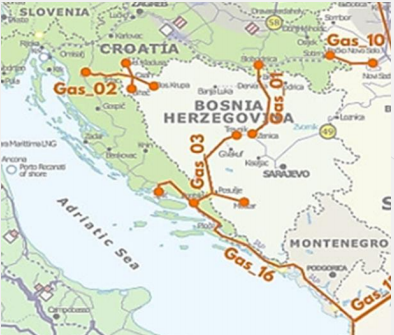 Below: Only Russian gas, via Serbia, can currently access Bosnia-Herzegovina (Map credit: Gazprom, which said its exports to Serbia from January through July 12 2018 totalled 1.2bn m3, up 5% year on year)

Bulgartransgaz Gets $615mn in Loan Offers