The Kingdom of Saudi Arabia this week transferred 4% of its shareholding in Saudi Aramco to the Public Investment Fund (PIF), the sovereign wealth fund tasked with leading the country’s economic diversification.

The move comes amid speculation that the company may soon list more of its shares as oil prices head towards $100/barrel and Aramco prepares to announce its 2021 results.

The share transfer reduces the state’s holding in Aramco to 94.3% with the remaining 1.7% of shares floated following the company’s 2019 initial public offering (IPO) on the local Tadawul All Share Index (TASI) – the Saudi stock exchange. Aramco is currently valued at just under $2 trillion, giving the 4% shareholding a valuation of around $80bn plus an annual dividend of roughly $3bn until at least 2024. The IPO of 1.5% and a subsequent sale of 0.2% raised $29.4bn, which Aramco transferred to the PIF. 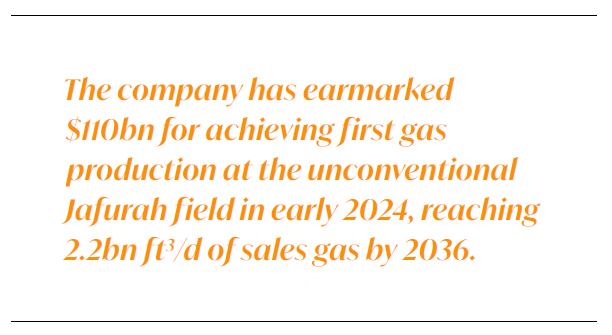 The fund’s investments are key to the long-term restructuring of the Saudi economy and will drive the achievement of the Kingdom’s Vision 2030.

Riyadh aims to increase the PIF’s assets under management (AUM) to SAR7.5 trillion ($2 trillion) by the end of the decade. In a PIF press release, crown prince Mohammed bin Salman was quoted as saying that the PIF’s AUM would reach SAR4 trillion ($1.07 trillion) by 2025, with the transfer of the Aramco shares taking the current level to around $560bn.

However, in reality, the share transfer does little more than shift value from one state pocket to another, as noted by Aramco. It said in a regulatory filing on the TASI: “This is a private transfer between the state and PIF, and the company is not a party to the transfer and did not enter into any agreements or pay or receive any proceeds from the transfer.” It added that the move would not have any impact on its operations, strategy, dividend distribution policy or governance framework.

However, the timing of the move has added fuel to reports that Aramco is working with advisors on a plan to float more of its shares on TASI as well as a potential secondary listing on an international exchange, with London and Singapore named as possible destinations.

These discussions are understood to be preliminary in nature, but there has been speculation that Aramco would list another 2.5% of the company to raise nearly $50bn.

While such a move would create waves in the market, it should not be unexpected given that the crown prince said 12 months ago that: “There will be Aramco share offerings coming in the coming years, and this cash will be transferred to the Public Investment Fund.”

Aramco and the Saudi state had planned to launch the company’s IPO for up to 5% of the firm on either the London, Tokyo or New York stock exchanges, but eventually opted for a pared-back local listing amid concerns about investor appetite. At that point, Aramco promised to pay a $75bn dividend in each of the first five years of trading with $73.7bn of this going to the state.

Another pre-IPO announcement was the reconfiguration of Aramco’s tax liabilities. When the company’s first bond prospectus was published in April 2019, it said that the state’s royalty would sit at 20% for Brent prices up to $70/b, 40% for Brent above $70 and 50% when Brent was above $100. These figures were adjusted to 15%, 45% and 80%, respectively, shortly before the listing.

While the move’s shortcomings were clearly visible when prices fell precipitously in 2020, the recent oil price rebound has boosted coffers and the state’s take is set to ramp up yet further as Brent surpasses seven-year highs and looks set to break $100.

Put into context, should dated Brent reach $110/b, the Saudi government would receive a royalty of around $32/b, compared to just $10.5/b at $70. Based on exports of around 7mn b/d, this equates to state royalties of $224mn daily before factoring in payment of Aramco’s 50% income tax.

Meanwhile, Aramco will continue to recycle its world class cash flow to maintain and increase oil capacity by 1mn b/d by 2027, while also pushing forward with the kingdom’s largest unconventional gas deposit. 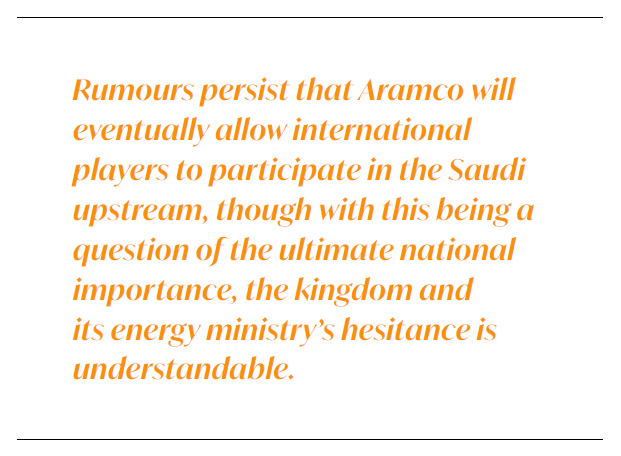 The company has earmarked $110bn for achieving first gas production at the unconventional Jafurah field in early 2024, reaching 2.2bn ft3/d of sales gas by 2036. It is worth noting that most gas-related activities are taxed by 20% as the kingdom looks to incentivise the development of sizeable though as yet underexploited resources.

A significant chunk of capital was provided by deals closed during the past 10 months to lease out then lease back 25-year and 20-year stakes in its oil and gas pipelines businesses, respectively. These deals netted the company almost $28bn.

Rumours persist that Aramco will eventually allow international players to participate in the Saudi upstream, though with this being a question of the ultimate national importance, the kingdom and its energy ministry’s hesitance is understandable. With Aramco’s expertise historically focused on oil, ring-fencing Jafurah or the company’s unconventional resources division for foreign participation appears the most likely option, but if funds can continue to be raised without any loss of control, it is unlikely that Riyadh will feel the need to make such a sensitive compromise.