LNG spot prices have fallen 50% since their October 6 high, which might sound calamitous for sellers, but at $28/mn Btu, at the end of January, they are still exceptionally strong by historical standards. It has been an extraordinary roller coaster ride from rock bottom in 2020 to new records in 2021, with pricing high throughout the calendar year. This summer may again defy the market’s normal seasonality and provide sellers with firm prices. 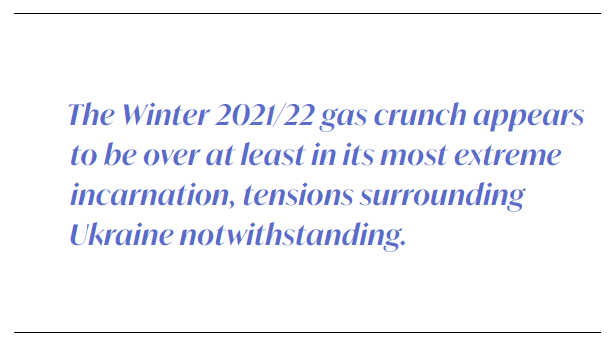 The Winter 2021/22 gas crunch appears to be over at least in its most extreme incarnation, tensions surrounding Ukraine notwithstanding. One of the first signs of market easing was the rapid descent of charter rates for LNG carriers. These exploded in fourth-quarter 2021 as both Asian and European buyers looked to cover potential winter demand. As more carriers moved into long haul operations, spending more time on each journey, carrier availability dried up, sending charter rates soaring.

That Asian demand now appears well satisfied is evidenced by Chinese buyers Sinopec and CNOOC offering LNG cargoes for sale throughout the summer, indicating that they are well stocked with gas.

Additional liquefaction capacity is coming onstream from a number of sources. US LNG producer Venture Global has filed a request with the US Federal Energy Regulatory Commission to load its first cargo in February from its Calcasieu Pass plant in Louisiana.

When the plant, the seventh large US LNG plant to come into operation, is fully up and running it will add 10mn mt/yr of capacity to the LNG market.

Production from Norway’s 4.2mn mt/yr Hammerfest plant should also come back into play, although not now until May. The plant was put out of action by a fire in September 2020 and its restart date has been put back a couple of times with COVID-19 problems cited as the principal reason.

Meanwhile, Indonesian upstream regulator SKK Migas said in October that it expected BP’s Tangguh Train 3 project to start up in the second quarter of this year, adding 3.8mn mt/yr of capacity. The 3.4mn mt/yr Coral South Floating LNG project off Mozambique is also slated to commence operations this year, but only in the latter half.

The weather plays a major role in determining LNG demand. Mild temperatures from late December and throughout January have meant seasonal heating demand in Europe has been relatively low. This provided welcome relief to a market which started the year in a near critical state, owing to a reduction in fourth-quarter Russian pipeline imports and very low storage levels. 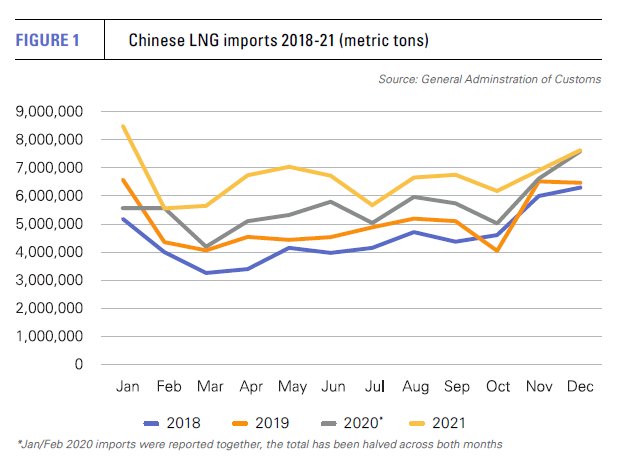 However, the weather is also a factor in determining summer demand, which last year was relatively high. Key drivers are high temperatures in Asia and/or the Middle East, which boosts power demand for air conditioning, and rainfall in South America, which determines hydro output and the need for LNG imports if hydro generation is low.

China, which last year became the largest LNG market in the world, is expected to see continued growth in LNG demand, but at a slower pace than last year (Figure 1). The boost from post-pandemic recovery is likely to diminish, while high prices for imported gas could see Beijing moderate its coal-to-gas switching programmes.

Gas supply is expected to rise in terms of both domestic production and the ramping up of pipeline imports via the Power of Siberia pipeline from Russia. Last year, just over 10bn m3 was sent through the pipeline, but deliveries are expected to increase year on year until the full capacity of 38bn m3 is reached in 2025. While China’s imported gas volumes are forecast to continue rising, a higher proportion will be met by pipeline gas, limiting LNG demand growth.

Rainfall in South America is an unpredictable factor. All of South America’s major LNG importers are dependent on hydro power for a large share of electricity generation. If reservoir levels are low, gas imports are needed to boost power generation, usually in the southern hemisphere winter, affecting summer pricing in the northern hemisphere.

Brazil last year suffered extreme drought, which in central and southern Brazil was the worst in almost a century (Figure 2). LNG imports spiked as a result, with state oil and gas company Petrobras importing a record 8.4bn m3 of LNG in 2021, up from just 2.7bn m3 in 2020. However, demand this year looks unlikely to provide the same seasonal counterweight it provided to the LNG market last year. 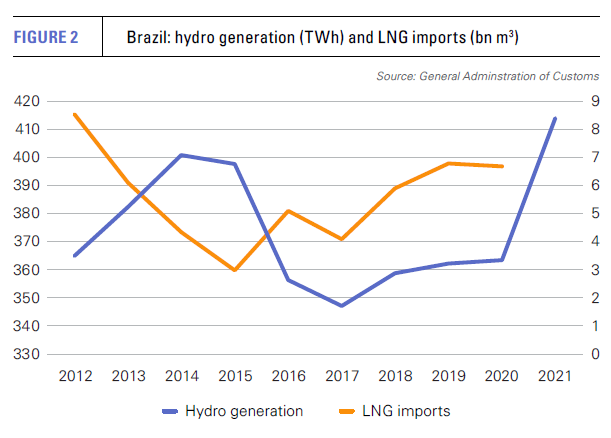 Brazil’s domestic gas supply is expected to jump with the expected completion in the first quarter of 2022 of the Route 3 offshore pipeline, which will bring gas onshore from the country’s subsalt oil fields. The pipeline will have a capacity of 18mn m3/d, equivalent to 4.8mn mt/yr of LNG, although full capacity may not be reached immediately.

Brazilian gas production last year rose 5% to a record level of 134mn m3/d, but about 45% of this was reinjected into oil fields, in part owing to the lack of export capacity to shore from subsalt production centres.

Brazil’s hydro reservoir levels have risen, owing to abundant rainfall since October, but, as of January, reports were that levels in six out of the ten most populous states were below those of last year, with the state of Sao Paulo the worst affected. The Cantareira reservoir system, for example, was at 30% volume, compared with ‘normal’ levels of above 60%.

Reservoir levels in other river systems have recovered well and are substantially above last year’s levels. January and February are typically months of high rainfall and will determine what state Brazil’s hydro system enters the southern hemisphere winter.

European LNG demand remains something of a wildcard.

Having entered the winter season with well below normal levels of stocks, European gas storage was at 39% of capacity on January 29, according to Gas Infrastructure Europe data. With European gas stocks (EU and the UK) at 420 TWh, there should be sufficient supply to cover the rest of the winter with the maximum and minimum drawdowns from end-January ranging historically from as little as 108 TWh to a maximum of 345 TWh. 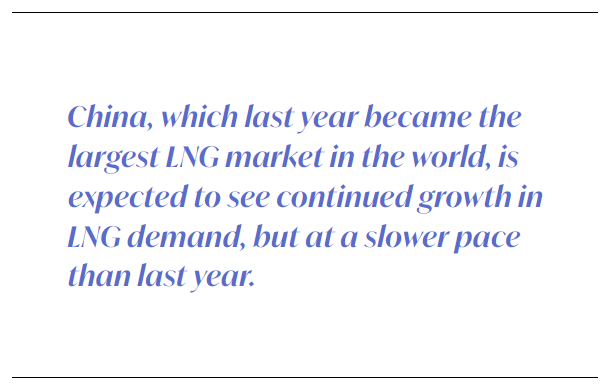 Europe entered the winter with reduced gas stocks, owing to low wind speeds in the autumn, alongside limited hydro, nuclear and coal-fired power generation, which boosted demand for gas-fired power. The European market now needs to rebuild those inventories, which will provide an additional level of demand to normal, at the same time that the region’s economies continue to recover from the pandemic and start to benefit from the disbursement of EU recovery funds.

In addition, continued coal and nuclear phase outs should keep demand for gas-fired generation steady even as new renewable energy capacity expands – in so doing, it will insert yet another weather-related variable into LNG demand forecasts.

Iberia should provide above normal levels of spring and summer gas demand, as a result of near drought conditions this winter, reducing the availability of hydro power. Both Portugal and Spain import LNG. Hydropower accounted for 22% (12.4 TWh) of electricity generation in Portugal and 16% (27.5 TWh) in the much larger Spanish market in 2020.

Overshadowing the European market is the threat of a Russian invasion of Ukraine, which would have a major impact on gas markets, despite the smaller role the country now plays in the transportation of Russian gas supplies.

Russia is reported to have amassed more than 100,000 troops and extensive military hardware on Ukraine’s eastern border, as well as moving troops into Crimea in the south, and, in the north, Belarus. It is seeking a promise from NATO that the organisation will never extend its membership to Ukraine, a demand which has been rejected.

However, they rose again in February to 108mn m3/d, causing an immediate drop in European gas prices, although they remain at elevated levels. 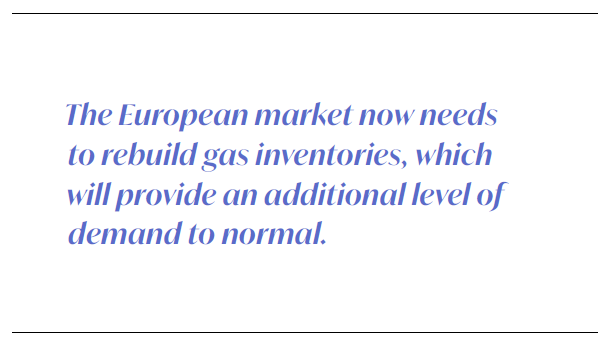 Western politicians have accused Moscow of withholding gas supplies, inflaming already high gas prices in an effort to gain concessions on Ukraine, as well as pushing Germany into a quick start for the Nord Stream 2 gas pipeline. This would mean additional capacity for 55bn m3/yr of gas to move directly from Russia under the Baltic Sea to Germany. In addition to its South Stream pipeline, this would allow Moscow to all but end its dependence on Ukrainian gas pipelines.

At a news conference at the White House in early February, US president Joe Biden said that Nord Stream 2 would not advance in the event of a Russian invasion of Ukraine. German chancellor Olaf Sholz stressed US-German unity, but did not address the issue of the pipeline directly.

Both the EU and US have threatened major sanctions against Russia in the event of an invasion, which would sour Russian-EU energy relations for years, if not decades.

Nord Stream 2 is complete, but the certification process in Germany was suspended on November 16 last year. The process should resume once German regulator Bundesnetzagentur is satisfied that the Swiss-based operating company Nord Stream 2 AG has transferred assets to a new German subsidiary. The project needs to satisfy the regulatory requirements of the EU Gas Directive on ownership unbundling, third-party access and tariff transparency.

Even if the tensions over Ukraine dissipate, the LNG market is likely to benefit over the continuing uncertainty surrounding Russian gas transits and the fate of Nord Stream 2. Europe will need to rebuild its gas inventories in the expectation that the pipeline will not come into operation at least until the latter part of the year and perhaps not even then.

This should keep European LNG demand relatively firm through the summer, while most forecasts suggest that China will continue to increase its LNG import volumes this year by around 7-9%, which should mop up much of the additional capacity coming onstream.

Any additional demand-inducing factors, such as heavy air conditioning requirements in north Asia, or low hydro generation in South America, would add to market strength. Spot LNG prices are likely to moderate from current levels, but there is little likelihood of a price collapse on the scale of 2020.