According to the report, International Hydrogen Strategies, produced for the World Energy Council Germany by energy consultancy Ludwig Bölkow Systemtechnik, 20 countries representing 44% of global GDP have passed a national hydrogen strategy or are on the verge of doing so. Additionally, another 31 countries (another 44% of global GDP) are supporting national projects and discussing policy action. The main drivers for hydrogen policy are greenhouse gas emission reduction goals, the integration of renewables, as well as the opportunity for economic growth.

Not all countries quantify the expected national hydrogen demand in their strategies, but the ones that do are all in a similar ballpark with respect to the respective size of the economy, notes the report. “Scaling upper hydrogen demand expected for 2050 in national strategies to global level based on GDP indicates a potential of up to 9000 TWh or around 270 million tons of hydrogen per annum. This is an amount as large as the annual primary energy currently provided globally by renewables.” Total global power production currently stands at roughly 23,000 TWh.

Note that the WEC’s projection falls at the lower end of the range projected by Bloomberg New Energy Finance in a report earlier this year. This concluded that hydrogen production could grow to 187 million tons if “supportive but piecemeal policy is in place”, and to some 696 million tons “if strong and comprehensive policy is in force”. BNEF ads that 696 MT would be enough to supply 24% of energy needs in a 1.5 degree scenario. Current worldwide hydrogen production is 70 MT hydrogen in pure form plus 45 MT used in industry, according to the 2019 report Future of Hydrogen from the International Energy Agency.

The WEC report distinguishes three phases in the ramp-up of hydrogen production (Figure 1): 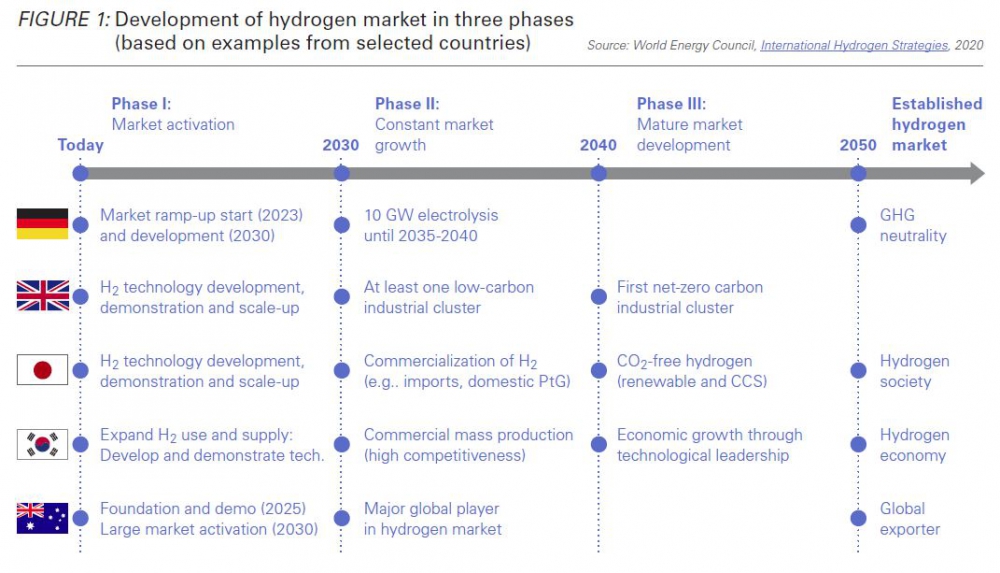 Most national hydrogen strategies target the transport sector and industry, but the power sector is also an important target. The building sector is less relevant in most national strategies (Figure 2):

In the 2030 timeframe, renewable hydrogen plays a lesser role in the hydrogen strategies of South Korea and Japan. “The Japanese strategy is very much focused on cost efficient production and import of hydrogen, addressing the switch to renewable hydrogen in the years after 2030. The Korean strategy is driven by economic growth and technology leadership in the end-use sector. In addition, Korea has rather low greenhouse gas reduction targets. As a result, Korea only plans to move to renewable and low-carbon hydrogen sources at a relatively late stage compared to other countries. In fact, fossil-based hydrogen (without CCS) is planned to still play a major role in 2040.”

Hydrogen production from methane pyrolysis is only addressed as a medium-term bridging technology in the official hydrogen strategies of Germany and the European Union, while Russia also sees a potential role in the longer term, notes the report, adding that this is a relatively new field of activity. Russia is also working on producing hydrogen from nuclear power.

“The expected market development signals emerging opportunities and areas to watch for,” notes the report, including the following:

Most strategies focus on targets for green hydrogen production and technology deployment rather than on measures supporting these, notes the report, adding that “current measures are insufficient to catalyse the envisaged strong growth and new policies are required.”

WEC has fond the following policies to be particularly helpful in fostering commercialisation: