World Bank leaves LNG out in the cold [Gas in Transition]

April saw a potentially devastating intervention by the World Bank into the debate surrounding the role of LNG in the decarbonisation of shipping. It came at the almost the same time as the publication of the 2nd Life Cycle GHG Emission Study on the Use of LNG as Marine Fuel, a study conducted by consultants Sphera (formerly Thinkstep) and conducted on behalf of industry bodies SEA-LNG and SGMF (the Society for Gas as a Marine Fuel).

In its report, The Role of LNG in the Transition Toward Low and Zero-Carbon Shipping, the World Bank argues that LNG should play only a limited role in shipping decarbonisation, and will not be either a significant ‘temporary’ fuel nor a ‘transitionary’ fuel. 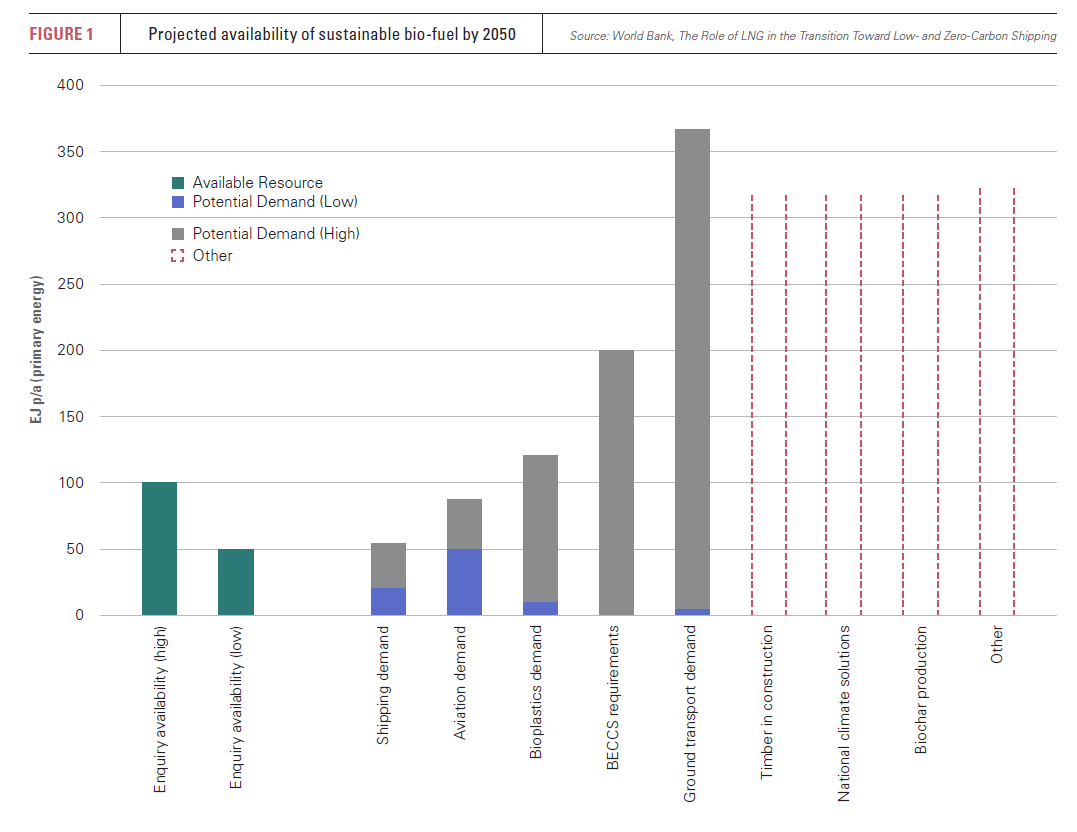 This runs directly counter to LNG industry hopes that the fuel can play a key role in early partial decarbonisation of shipping, thereby creating a new source of LNG demand, and a role in full decarbonisation through the combined use of carbon offsetting and bio or synthetic methane.

The bank went further to recommend that governments move to end support for the deployment of LNG as a bunker fuel, warning that the uptake of LNG use in the marine sector carries financial and environmental risks.

To date, the EU and some governments have supported the construction of LNG import terminals, LNG bunkering facilities and the conversion of ship engines and systems to use LNG. This support has been crucial in simultaneously creating both supply and demand for the fuel in the shipping sector.

The bank says the maritime market for LNG could develop in three different ways. First, LNG could emerge as a transitional fuel, remaining in use in some form in 2050. By this point, LNG would be carbon neutral as a result of carbon offsetting and the use of bio or synthetic LNG.

Second, LNG use could be temporary and superseded by zero carbon bunker fuels, such as green ammonia and hydrogen, probably from around 2030. Third, there could be no significant adoption of LNG.

The bank rules out a transitionary role for the fuel on the grounds that the reuse of LNG infrastructure in a zero carbon future would only be practical for biomethane and synthetic methane. It says that LNG technology and LNG supply infrastructure are not technically compatible with the two most promising zero carbon fuels, ammonia and hydrogen.

It argues that there will not be sufficient volumes of bio and synthetic methane, owing to a lack of feedstock, claims from competing sectors such as aviation, and because their production costs are likely to remain high compared with other zero carbon fuels.

Nor does LNG make the cut as a temporary fuel, which the bank says would require an expensive double transition, first from oil to LNG and then from LNG to zero carbon fuels. This would require 30% more investment expenditure than that required to achieve full decarbonisation, the bank calculates.

In other words, the GHG benefits “would not be transformative,” and in fact could be negative as a result of greater LNG use in shipping.

With demand for LNG peaking in the early 2030s in this scenario, then rapidly diminishing, its rise and fall would occur in a shorter timeframe than the life of the LNG assets invested in. This, the bank says, would be likely to create pressure for a more gradual phase out of the fuel, otherwise known as technical lock-in, which would have adverse environmental impacts.

On this basis – significant extra cost for uncertain climate benefits – it would be better for the shipping industry to wait until a single transition from oil fuels to zero carbon fuels is possible.

The report has understandably provoked a strong reaction from the LNG industry. Key differences are the degree to which LNG reduces GHG emissions and whether bio and synthetic methane provide a realistic decarbonisation pathway. SEA-LNG argues that to delay LNG adoption on the basis of as yet uncertain alternatives will simply make the situation worse.

The Sphera report says that LNG use in shipping results in a reduction of up to 23% in GHG emissions, in comparison with very low sulphur fuel oil, on a full well-to-wake lifecycle basis, and that there are many reasons to believe these gains can increase as a result of technological improvements and reductions in methane emissions along the LNG supply chain.

In particular, SEA-LNG says its report, unlike the studies on which the World Bank report is based, uses the most up-to-date data on the latest engines in use, which significantly reduce methane slip from the incomplete combustion of fuel in the engine.

The organisation argues that the bank over-estimates the problem of methane slip, which means it underestimates the GHG emissions reduction potential of LNG, leading to erroneous policy recommendations.

Just as there is no consensus over the level of GHG reductions from LNG, there is none on the potential growth and cost of bio and synthetic methane (Figure 1).

Based on its study, Outlook for biogas and biomethane: Prospects for organic growth, published in March 2020, the International Energy Agency (IEA) sees a very positive role for biogas and biomethane. They embody the idea of the circular economy, the agency says, as the fuels are produced from the increasing amounts of organic waste created by society. 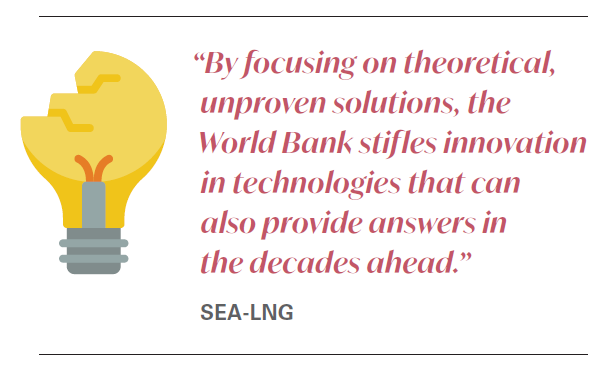 Its report says the feedstocks available for sustainable production, excluding any that compete with food for agricultural land, are huge and that only a fraction is currently used. The study estimates sustainable biomethane potential at 730mn metric tons of oil equivalent (toe), more than 20 times the roughly 35mn mtoe produced today.

The IEA advocates supportive policies to unlock the potential of biogas and biomethane, which it considers essential to its Sustainable Development Scenario, in which the goals of the Paris Treaty on Climate Change are met.

In addition, a 2020 study, Availability and costs of liquified bio-and synthetic methane, the maritime shipping perspective, conducted by consultants CE Delft and commissioned by SEA-LNG, calculated a global maximum sustainable supply of liquid biomethane which far exceeded the forecast demands of the shipping sector in both 2030 and 2050 (as a maximum conceivable figure would), but also suggested enough liquid biomethane could be produced in its lowest output scenario.

Like the Word Bank report, SEA-LNG’s pushback and its latest study are unlikely to be received uncritically.

First, SEA-LNG commissioned both the Sphera report on LNG’s GHG emissions from shipping and the 2020 CE Delft study, so the organisation will inevitably be accused of producing reports which say what it wants to hear. The World Bank can claim more objectivity, but SEA-LNG more industry knowledge.

Second, the World Bank report takes into consideration studies that look at both 20-year and 100-year global warming potentials (GWPs) for the impact of GHGs.

A shorter time span for the GWP accentuates the impact of methane vis-à-vis CO2. The multiplier effect for methane versus CO2 over 100 years is 36, but over a 20-year GWP horizon it is 87. Many environmental organisations, such as the International Council on Clean Transportation, argue that a 20-year GWP is the more relevant metric by which to judge LNG.

Third, the headline figure that LNG use in shipping results in up to a 23% reduction in GHG emissions will face scrutiny. The phrase ‘up to’ is significant. The study says that the GHG savings for two-stroke, slow-speed engines is from 14% to 23% and for four-stroke medium-speed engines between 6% and 14%.

As the study explains, when it comes to the GHGs emitted by ships, as opposed to the full supply chain, performance depends heavily on engine type and operation.

The study is based on steady-state test-bed data using standard test cycles with data provided by the engine manufacturers for deep sea shipping. This reflects the operation of many large ocean going vessels, but as the report again notes, GHG emissions based on operational fuel consumption and measured emissions data will differ due to load cycles and duration.

However, the bottom line is that if the Sphera report is taken at face value, this is still not sufficiently transformative, given the International Maritime Organisation’s stated goal of reducing GHG emissions from shipping by 50% by 2050 and the pursuit of carbon neutrality thereafter.

LNG’s use in decarbonisation then starts to rest very heavily on the likely availability and cost of bio and synthetic methane. About this, the World Bank may be right to be sceptical in terms of future availability and cost, but as shown above, this is not a universal viewpoint. Moreover, by limiting a potentially significant market for bio and synthetic LNG, the bank risks curtailing development of a fuel source which the IEA sees as critical for its sustainable development pathway.

SEA-LNG’s most potent criticism is that the bank is being heavily prescriptive in a technologically very uncertain environment. In particular, the bank’s report does not seem to consider that LNG initially plus bio and synthetic LNG in future does not have to meet all of shipping’s zero carbon fuel requirements to make a potentially substantial contribution to maritime decarbonisation.

And, as such, if viewed as one element among many, investment in LNG infrastructure need not become stranded.

If targeted at the ship operations for which it performs best in terms of emissions reductions, most studies agree that on a 100-year GWP, which is the standard approach, LNG does result in non-negligible emissions reductions. Moreover, LNG’s superior performance in terms of air pollutants, and the consequent health benefits, cannot be ignored.

For ship owners, faced with extremely difficult investment decisions, the reality is that they can order an LNG-fuelled ship today and bunker at an ever-rising number of ports around the world, whereas they cannot order one running on ammonia or hydrogen.

SEA-LNG is right that in attempting to pick winners, the World Bank is being overly prescriptive. Moreover, in doing so, the bank’s position threatens the ‘all of the above’ approach, which is appropriate at this stage of technological development and supported by the IEA.