Update at 3.30pm GMT: BASF has told NGW that a supervisory chairman for the new Wintershall DEA company "has not been determined yet."

Wintershall meanwhile informs NGW that the new company will require approvals from merger control authorities in the EU, Mexico, and maybe Argentina, plus clearance under foreign investment regulations from Germany and Russia, and approvals of several mining authorities and the German Federal Network Agency regarding gas transportation. "We expect closing to take place in the first half of 2019," it said.

Wintershall also confirmed that its gas transportation business - which includes interests in joint ventures or consortia with Gazprom such as Gascade, Nord Stream 1 and 2 - will be folded into Wintershall DEA. Once the merger of Wintershall with DEA is closed, BASF expects to receive additional preference shares in Wintershall DEA over and beyond the initial 67% equity holding.  The original article from 8.30am GMT follows.

BASF and Letterone announced the merger agreement late September 27 of their respective upstream businesses, Wintershall and DEA, as reported by NGW.

Wintershall has since said it expects closure of the transaction in first half of 2019. BASF and LetterOne later envisage listing the new 'Wintershall DEA' through an initial public offering (IPO).

“We are confident that the merger of Wintershall and DEA will generate strategic growth and create synergies. With more self-operated projects, stable, long-term partnerships, and an optimised portfolio, Wintershall DEA will strengthen its international market position as a joint venture,” explains Wintershall’s CEO Mario Mehren and the future company's CEO: “One thing is clear: Wintershall and DEA – two German companies with a long-standing tradition – are an excellent fit, as they complement each other in terms of strategy, business segments, and international locations."

Russian-owned L1 Energy's executive chair John Browne, who currently chairs DEA, said: “Wintershall DEA is the largest E&P merger in Europe for over a decade, and will have a diverse portfolio of outstanding growth prospects, with the scale needed to access important new opportunities. We expect the company to evolve rapidly into a world-class and globally competitive organisation." His boss Mikhail Fridman, co-founder and main owner of L1, added: “LetterOne is looking forward to working with BASF to create Wintershall DEA, which will be a new and unique international company.

In a comment, Wood Mackenzie said the tie-up would allow Wintershall to escape the shadow of its chemical company parent, the merger bringing production from an internationally diverse range of assets. The two have "strong European hubs, and both have material positions in Germany and Norway. The bulk of Wintershall's value lies in Russia, and it has a material position in Argentina, including exposure to the Vaca Muerta unconventional play. DEA has a second core in Egyptian gas, and is establishing a position in Mexico.”

More details are in the original NGW report of September 27. Graphic below courtesy of Wintershall. 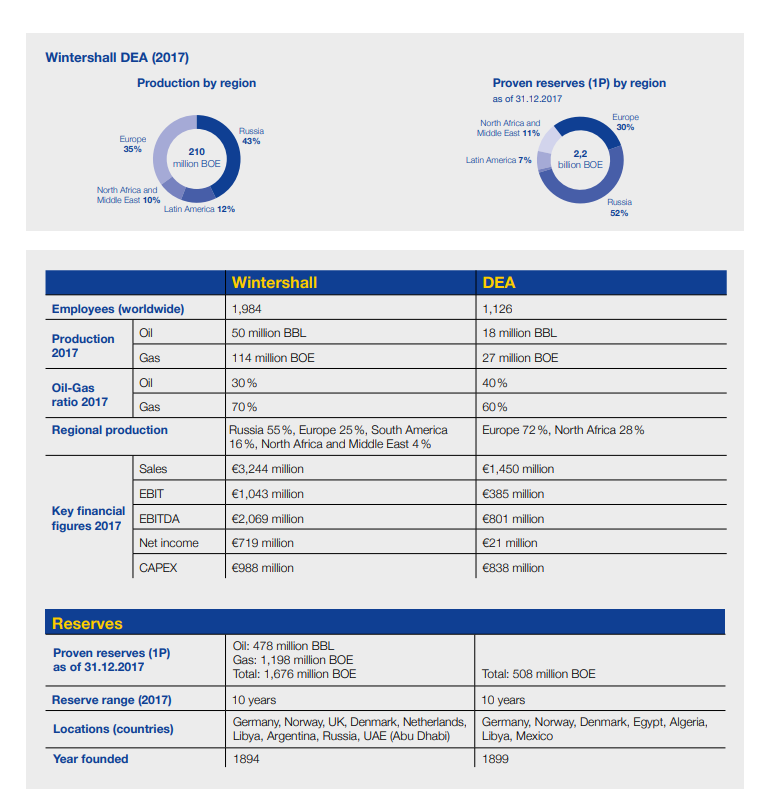