Winter is coming… and so is further volatility for energy markets

Energy prices have seen significant strength recently. European gas prices have rallied 94% over September, taking them to record levels. Oil and coal have also strengthened, as concerns grow that tightness in energy markets will persist throughout the winter. Higher energy prices also have implications for the rest of the commodities complex.

The European winter gas season officially started on 1 October and the region has entered it with the lowest natural gas storage levels in over a decade. Gas storage, as of 30 September, was 75% full compared to a five-year average of 89% for this stage of the year. Lower flows of Russian gas, along with a heavy maintenance season in Norway, have led to this tightness, while recovering demand post-Covid-19, has only added to this. The LNG market has provided little relief to the European market, with higher prices in Asia ensuring that spot cargoes have gone there rather than to Europe.

While the market is already tight, high prices also reflect fears over tightness in the months ahead, particularly if we see a colder-than-usual winter. If Europe experiences a normal or mild winter, there is the potential for a downward correction.

In addition, if there is a quick ramp-up of gas flows along the 55bcm Nord Stream 2 pipeline, this could take some of the pressure off the market. However, realistically it is unlikely that the now-complete pipeline will receive all the necessary regulatory approvals in time to make a meaningful difference to the European market this year. LNG inflows could also help to improve the supply situation, but as we have seen for much of the year, Europe will need to compete with Asia for these cargoes.

Given the amount of uncertainty heading into winter, we suspect natural gas prices will remain elevated and volatile. It is only as we move towards the end of winter that we see significantly weaker prices. 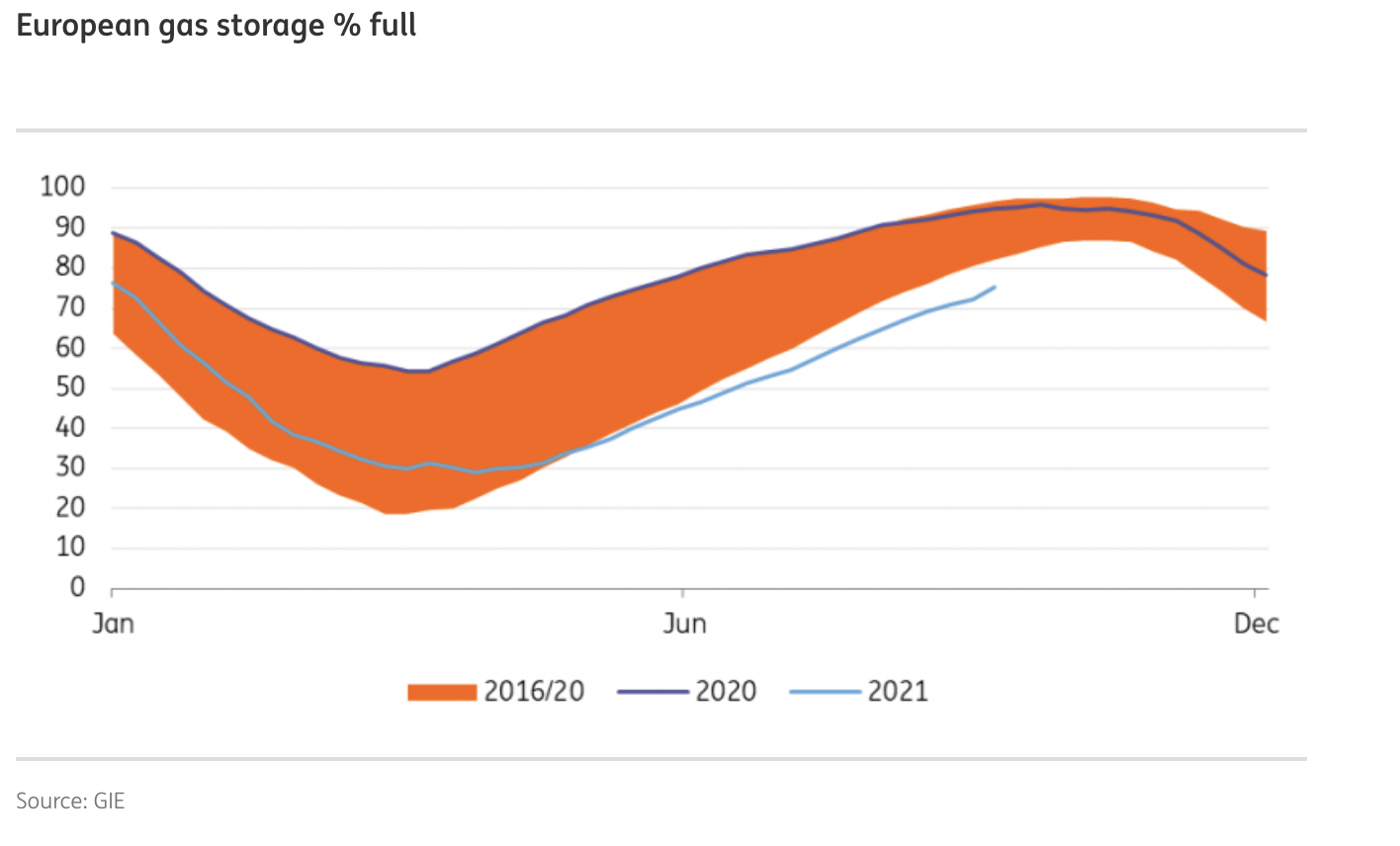 We have all seen the headlines of power rationing in China in recent weeks. Power consumption in China has reached record levels this year, and over the first eight months, is up almost 14% year-on-year. However, coal, which still makes up the bulk of the power mix, has seen its output grow by only 4.4% YoY over the same period. In addition, imports are limited partly as a result of the continued unofficial ban on Australian coal imports, while flows from Mongolia have been under pressure due to Covid-19 restrictions. This has seen the domestic coal market tighten up and so China has had to rely on other fuels. This has helped to support the strong growth in LNG imports this year, which have grown by 24% YoY over the first eight months of the year. Recent reports that China has urged domestic energy companies to ensure adequate supply going into the winter, suggest that coal and LNG markets will remain well bid by Chinese buyers in the short term. 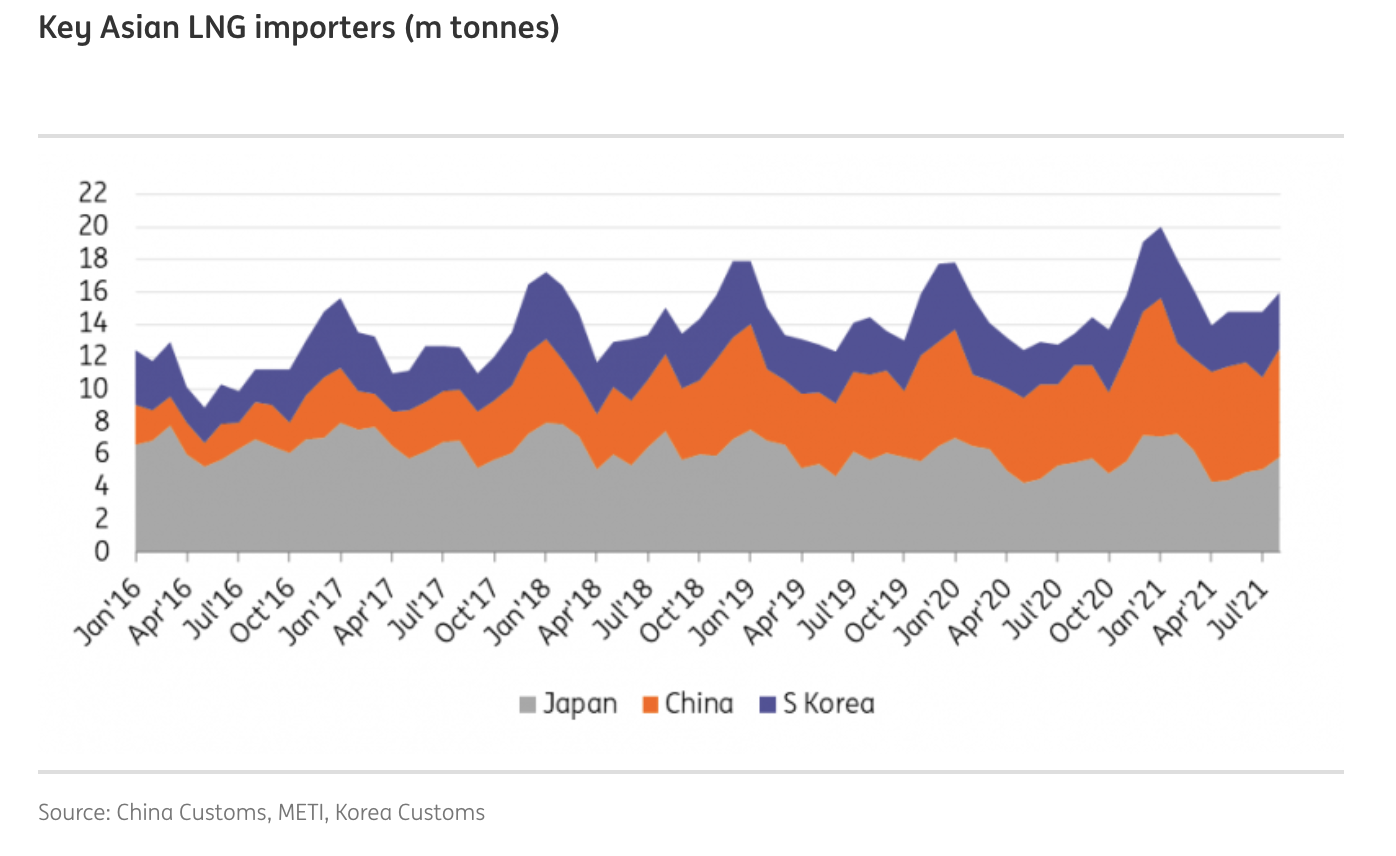 The significant strength that we have seen in the gas market has meant that it is trading at a large premium to oil. TTF gas prices in Europe are trading at an oil equivalent of more than US$250/bbl, well above current oil prices of around US$82/bbl. This should incentivise switching from gas to oil when it comes to power generation. We are already seeing this happen in several countries where there is capacity. This will provide a boost to oil demand for the remainder of the year. As a result, the oil market is looking tighter in the short term, which suggests that prices will remain well supported until the end of the year.

This has led us to revise higher our ICE Brent forecast for the final quarter of this year to an average of US$77/bbl, up from a previous forecast of US$70/bbl. The reason we are not comfortable revising the forecast to an even higher level is because if prices trade above US$80/bbl for a sustained period, there is a greater risk of OPEC+ easing its supply cuts.

As for 2022, we continue to expect that oil prices will trade lower from current levels and are forecasting that ICE Brent will average US$70/bbl over the year. The market is expected to be much more balanced next year due to the expectation of strong non-OPEC supply growth. In fact, there could be periods next year when OPEC+ may need to delay further easing, with the market in surplus in some months.

Impact on the rest of the commodities complex

Higher energy prices are also having an impact on other parts of the commodities complex. In Europe, we have also seen several industrial players reducing operations due to rising electricity costs. For example, a zinc smelter in the Netherlands has already curtailed operations during peak times.

It may be easy to think that the impact of power rationing in China would be constructive for several other commodities. For example, we have seen several metals industries forced to curtail operations due to power shortages. The aluminium and steel industry receive the most attention with regards to this. While this will certainly have an impact on supply, government orders to reduce power consumption go all the way down the supply chain and thus affect downstream consumers as well. Therefore, it becomes a little bit more difficult to fully judge, at least in the short term, if these power issues are overall bullish or bearish for some metal markets.

In addition, some soybean crushing plants in China have also had to shut, and while this may be supportive for soybean meal and soybean oil prices in China, it certainly is not a constructive development for soybean demand and prices.

Ultimately, the longer this higher energy price environment persists, the more likely it is that we see these higher prices feeding through to higher production costs for other commodities. As a result, this should raise the floor for commodity prices more widely. However, our base case assumes a downward correction in energy prices as we near the end of the 2021/22 winter, which should help ease some of the cost pressures for other commodities.