Will the gas industry face its Volkswagen moment? [GasTransitions]

“Similar to Volkswagen Group’s emissions cheating, the Australian and global gas industry is also misleading and deceiving both its customers, investors and governments over the full effects of its products,” writes Bruce Robertson, energy finance analyst at the Institute for Energy Economics and Financial Analysis (IEEFA) in a research paper published in March 2020. “The gas industry is misleading the public, and is likely to be held accountable,” warns Robertson.

“Volkswagen lied about emissions from their vehicles, and the gas industry is also lying about their emissions,” IEEFA states in a press release accompanying the paper. These are pretty serious accusations. “The gas industry is misleading government, investors, customers and the broader population about the amount of carbon dioxide and methane emissions being released during production, supply and distribution of both conventional or ‘natural’ gas and its product for export – liquefied natural gas (LNG),” charges IEEFA.

The report by Robertson focuses in particular on the Australian gas industry. The Australian government promotes natural gas as a transition fuel as the country moves away from coal. The government justifies this policy with reference to claims from the gas industry. According to Robertson, “Since the 1990s, the gas industry has led the rhetoric that conventional or natural gas is the transition fuel away from coal.” Specifically, the industry claims “that gas emits 50% less greenhouse gas than coal,” writes Robertson.

As evidence, he cites the Annual Results 2019 report from Australian energy producer Santos, which states that “Natural gas has a key role to play in a lower carbon future as it produces 50% less greenhouse gas emissions than coal when used to generate electricity, can significantly improve air quality and is the perfect partner for renewable energy sources.”

In an email communication, Robertson gave Gas Transitions a number of other sources from the national and international gas industry in which the 50% number is mentioned. He also said that the “claims of the industry are echoed at the highest levels of government”, citing a recent speech made by Angus Taylor, Minister for Energy and Emission Reductions, in which he said: "But Australia’s LNG exports have the potential to significantly lower emissions in importing countries, as they make the transition to new technologies, by around 148 Mt CO2-e per year, by replacing coal, which has around double the emissions of gas."

In Australia, however, CCGTs are “not a large part of the national electricity system,” writes Robertson. “Gas prices in Australia are simply too high and it is not economic to run the plants when there are cheaper sources of power.” Thus, Robertson suggests, it would be more truthful for the gas industry to speak of 31% lower emissions rather than 50%.

Secondly, the claim ignores the possibility that greenhouse gas emissions from gas may be significantly higher than is generally assumed, because methane emissions are underestimated. He cites the new study published in Nature in February 2020 “showing that potent methane emissions from fossil fuel production are 25% to 40% higher than previously understood.” Based on measurements of methane levels in ice cores, the authors of this study discovered that “the levels of naturally released fossil methane are about 10 times lower than previous research reported.”

“We’ve identified a gigantic discrepancy that shows the industry needs to, at the very least, improve their monitoring,” said Benjamin Hmiel, a researcher at the University of Rochester and the study’s lead author. “If these emissions are truly coming from oil, gas extraction, production use, the industry isn’t even reporting or seeing that right now.”

Robertson advances a third argument as well. He argues that it is misleading for the Australian gas industry only to look at the domestic use of natural gas. According to Robertson, “The industry’s claims of gas producing 50% less greenhouse pollution than coal also fails to consider a full life cycle analysis of the product. Australia is the world’s second-largest exporter of [LNG],  with the gas industry exporting about three quarters of the gas it produces.”

“The energy intensity of the LNG process is best illustrated by the fact that 17% of the methane produced is used just to produce and transport the LNG,” notes Robertson. The direct emissions of methane in the shipping process are unknown. According to Howarth, “LNG is kept in liquid form by allowing some methane to boil off, resulting in evaporative cooling. In a typical voyage, 2 to 6% of the LNG is lost as gaseous methane due to this boil off. Usually, the methane is used as fuel to help power the ship, but it seems highly likely that some is emitted to the atmosphere, although I am aware of no data on this emission.”

Howarth concludes that, taking in all the emissions and burning as fuel, LNG produces more greenhouse gases than coal. (Figure 1)

Whatever we may think of the Australian’s industry’s climate claims, fact is that, as Robertson notes, the share of natural gas in the Australian domestic market has strongly declined. Conventional or ‘natural’ gas use in Australia’s National Electricity Market (NEM) has fallen some 59% in the last five years due to massive overpricing and supply concerns, while renewable energy has grown strongly, notes Robertson (figure 2).

What is more, “there is currently no committed investment into gas-powered generation in Australia,” writes Robertson (figure 3).

Nor does the Australian Energy Market Operator (AEMO) – which manages the country’s electricity markets - see a larger role for gas in the future in a renewables rich grid, Robertson adds (figure 4). 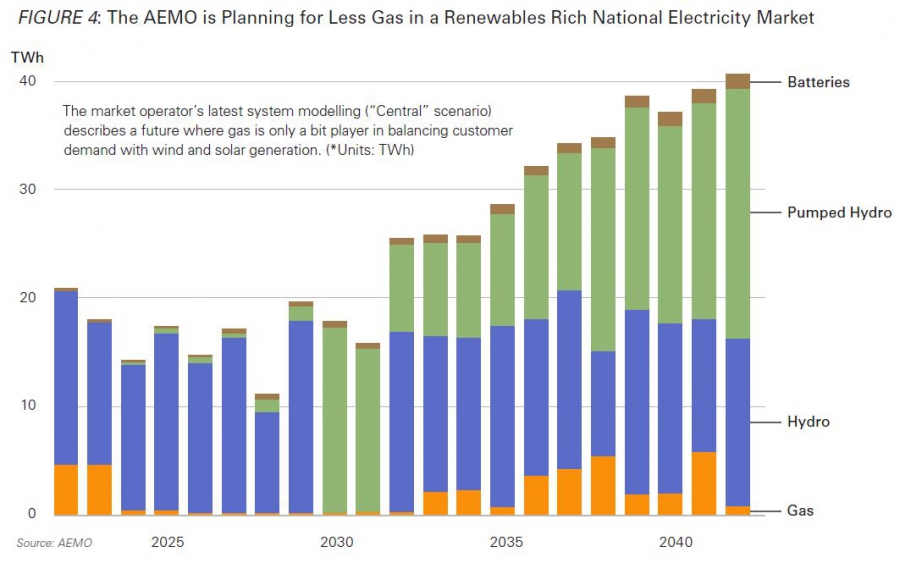 From this he concludes that natural gas should not be viewed as a “transition fuel”. The gas industry, however, takes a different view, notes Robertson. It “is proposing a long list of new gas projects around Australia, both onshore and offshore. All of these new provinces, if they start, will be operating well beyond 2050, including Narrabri in New South Wales, the Galilee and North Bowen Basins in Queensland, shale fracking in the Northern Territory’s Beetaloo, major onshore and offshore projects in north-west of Western Australia, new provinces in the south of South Australia, and lobbying to open up onshore gas in Victoria.”

“The gas industry is using the transition narrative to embed itself into the energy future of Australia in the long term, and crowd out other sources of power,” Robertson concludes. He warns that “the industry’s claims that exported gas (LNG) is good for the environment will come under increasing scrutiny in the near term. Investors, regulators and consumers of gas need to be aware that they, in IEEFA’s opinion, have been misled and deceived over this fossil fuel’s greenhouse emissions. Gas is neither clean nor natural, and 2020 will see the industry face its Volkswagen moment.”