Since licences in the last UK round for offshore oil and gas acreage were handed out in 2020, much has changed in government policy. The energy transition has moved up a gear, in light of the agreements set out at the COP26 conference in Glasgow last autumn to limit climate change. 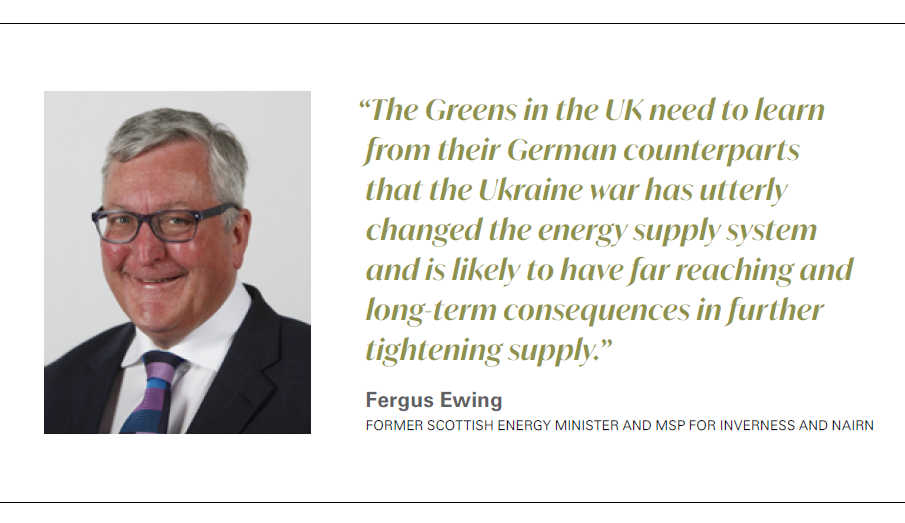 Post-COP26, more regulations on matters like flaring at new production platforms can only support the oil and gas industry’s efforts to reduce its carbon footprint.  But environmental activists want to go further. In October, Greenpeace unsuccessfully sought a Scottish court order to block two development wells at BP’s Vorlich oilfield.

The assumption has been that with North Sea activity in decline, the energy transition will involve retiring some uneconomic Scottish fields in favour of new energy sources, possibly negating the need for new exploration and production programmes. Drilling activity had fallen by 35% from 2015 to 2020 following the oil price crash at the start of that period, according to Wood Mackenzie, though the North Sea outperformed a 50% decrease for exploration globally.  A second licensing round in 2020 was postponed, to allow for more block relinquishments to free up acreage for relicensing.

In Scotland, the Scottish National Party (SNP)-led government, which also comprises the Scottish Greens, is keen to stress its environmental credentials.

The days of the SNP calling for increased North Sea hydrocarbon extraction – key to the Scottish independence pitch since the 1970s – appear over. COP26 taking place in Scotland gave nationalist leaders a global role in shaping the climate agenda.

“Under [first minister] Nicola Sturgeon, perhaps the most cherished goal of the Scottish government, besides achieving independence, is being seen as progressive,” says Anthony Salamone, managing director of Edinburgh-based political analysis company European Merchants. “The Scottish government is eager to be viewed, both within Scotland and abroad, as ambitious on climate change. Proponents of independence are now, for the most part, far more interested in championing Scotland’s potential in all manner of renewables.”

But soaring energy prices in the wake of the war in Ukraine have complicated matters politically. The latest crisis has emboldened SNP dissenters to urge Sturgeon to back new licensing rounds. As the energy price climbs higher, the fundamentals are changing to make returns from frontier North Sea exploration more likely. There's also growing pressure to help out European nations more dependent on Russian gas.

While Sturgeon's political platform is progressive, critics have derided her administration over Shell's withdrawal from Cambo oil and gas field off the northwest of the Shetland Islands, concerned about the impact for Scottish jobs, and future energy security. 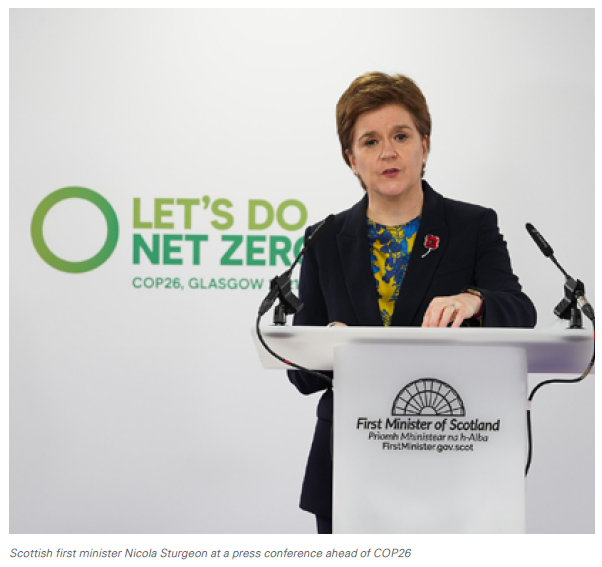 Fergus Ewing, a former Scottish energy minister under Sturgeon and her predecessor, Alex Salmond, has called for North Sea output to be maximised. In an interview with NGW, the Scottish parliament member says he believes the decision to produce additional domestic gas from new or existing UK fields must be considered in the context of emissions from LNG imports, which may actually have a larger carbon footprint.

Ewing cites the UK Oil and Gas Authority's May 2020 emissions intensity analysis, which suggests LNG offtake to the UK emits 59 kg of CO2/barrel of oil equivalent on average, compared to 22kg/b for UK domestic supplies. Norwegian supplies, delivered through the 25.5bn-m3 Langeled and 14.2bn-m3 Vesterled pipelines, are marginally more carbon efficient at around 17 kg/b.

“By its nature LNG, like that we receive from Qatar, has more emissions as it has to be liquefied, then transported and then, once in the UK, it has to be regasified,” Ewing tells NGW.  “The factual position is that in the UK, we produce less than half of our own gas. We are no longer self-sufficient, as we import gas from elsewhere, most notably Qatar, the US and Norway.”

With higher energy bills now hitting households, there is no guarantee Scottish opinion will line up with SNP policy on limiting new exploration activity. John Constable, director of energy at the pressure group Net Zero Watch, argues Westminster must override the SNP to encourage fossil fuel development, a move that could win votes from low-income Scottish households in forthcoming elections.

“At higher prices some, perhaps many, North Sea resources may be economic,” Constable tells NGW. “It would be irresponsible of the British government not to encourage their development at this time.”

Out of step with Europe

Nicola Sturgeon sided with Greenpeace and other environmental NGOs to oppose the Cambo development, which has an estimated 170mn barrels of lifetime oil reserves, plus 53.5bn ft3 of natural gas. The project is now in limbo following Shell's exit in January this year, despite operator Siccar Point Energy's claim its natural gas could provide enough to power 1.5mn homes for a year.

Of course Westminster has the powers to open up new oil and gas blocks, even if they lie in Scottish waters. Salamone says this has allowed Sturgeon to carve out a policy position without “having to implement it”, as the UK “actually has to decide based on the realities at play.”

The irony is that more of Scotland’s counterparts in Europe have accepted the role that gas and other fossil fuels will play in stabilising the energy transition. In February, the European Commission endorsed natural gas as a "transition fuel", ensuring investors can back new gas projects in line with European sustainability objectives. In Germany, the effort to phase out coal and nuclear power continues, although the coalition government of the Social Democrats, the Free Democrats and Alliance 90/The Greens, has hinted that the pace will be slowed. Under the original plan, coal and nuclear-fired plants will remain open until 2030 at the earliest, brought forward from 2038 under the previous administration.

“There isn’t a simple answer – there will be swinging gas price rises and heating prices for households. But people are recognising the need for gas production and investment,” Ewing says, “Certainly in Europe, where markets heavily depend on Russian gas, EU leaders say it will take five years until sources are ready.

“The Green Party in Germany has faced up to the reality and recognises that coal and nuclear power will remain in the short term,” he continues. “The Greens in the UK need to learn from their German counterparts that the Ukraine war has utterly changed the energy supply system and is likely to have far reaching and long-term consequences in further tightening supply.”

As 2022 progresses, European leaders will continue to adjust energy policies to wean themselves off Russian gas, and UK policy will face renewed scrutiny in light of this. The efficacy of simplified fossil fuel policies, like stopping new field developments in Scotland, or preventing shale extraction in England, may become less politically attractive. 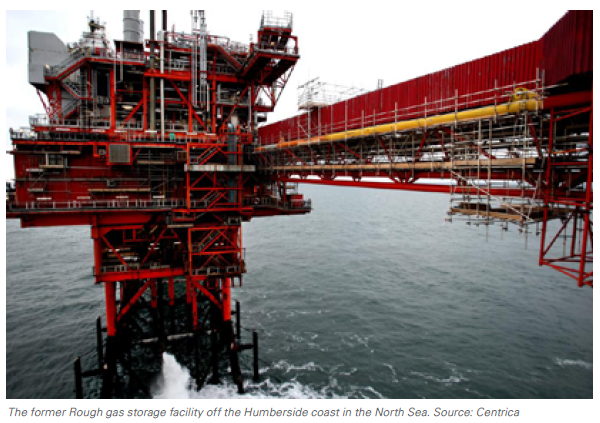 North of the border, the shift in mood in England as the UK government actively considers policy changes will increase scrutiny of decisions in Edinburgh that harm Scotland’s role as an European energy powerhouse. And, as Ewing points out, maintaining the skilled oil and gas economy in Scotland is key to building technologies, like carbon capture and storage, to help the UK navigate the climate transition.

Ewing concludes: “The oil industry is essential to create the methods required to deliver the climate change targets. You also need to store carbon subterraneously – and the only place that can be done is the depleted oil and gas field off Scotland’s coasts.”

New oil and gas exploration is one part of the puzzle, but there is a clear upside from drilling existing fields to open near-term capacity. This could ultimately be fed into the UK’s energy mix sooner, avoiding emissions from imported gas as the energy transition gathers pace. As an alternative to using LNG cargoes, purchased in many cases from the other side of the world on an ad-hoc basis, the option of opening in-fill wells at proven acreage must be explained comparatively in political discourse.

“My understanding is that some of the existing gas fields can be extended by means of infill drilling – not every new field requires a brand new platform or an FPSO,” says Ewing, “Some additional gas can be supplied more quickly than developing a brand new field.”

“But we also need to improve the lamentably inadequate storage capacity,” he adds.

Ewing also points out that Centrica decided to close the Rough storage bank off the coast of Yorkshire in 2017 after negotiations with the UK authorities. Plans to revive the 3.3bn-m3 gas storage, which could house enough gas to cover emergency demand for nine days, emerged in the US press last autumn, and London is now thought to be leaning toward letting Centrica use customer revenues to reopen the facility.