President Joe Biden finally got his $1.2-trillion Infrastructure Investment and Jobs Act (IIJA) through both the House and Senate and signed it into law on November 15, promising to overhaul US transportation, communications and energy systems as the country adapts to climate change.

It is a massive victory for the Biden administration, which promised so much on climate change but has been slow on delivery. IIJA includes $47bn in climate resilience measures and $65bn in clean energy, including grid-related investments, over a five-year period. This is seen as an important step towards achieving net-zero by 2050 – something the US pledged at COP26 in Glasgow.

Emboldened by this, Biden signed an executive order on December 8 that requires the US federal government to reduce its emissions by 65%, run on carbon-free electricity by 2030, and achieve net-zero emissions by 2050.

It also looks likely that a companion bill, the Build Back Better Framework (BBBF) that provides for $1.75 trillion in investments in climate change, health-care and education, will be voted into law soon. It has been passed by the House and now awaits Senate approval. Wall Street rates its chances to be in the 80% to 90% range. Referring to the two bills, Biden said that they will “add up to the largest effort to combat climate change in the history of the US.”

But the American Petroleum Institute (API) is fighting a rear-guard action to amend the BBBF. Among other things, it does not like its proposed methane leakage provisions and the increased royalties on leases on federal lands. “We will see what comes out the other end and if some of these provisions are included we’ll work hard with members of Congress so that they understand the importance of voting no,” API CEO Mike Sommers said.

So, what does IIJA mean for natural gas, the reduction of carbon emissions, carbon capture, utilisation and storage (CCUS) and energy in general? Even though not its central element, IIJA includes critical investments in energy-related areas totalling over $120bn, with a focus on innovation.

⦁      Support for activities, technologies, equipment, and measures that reduce the likelihood and consequence of impacts to the electric grid due to extreme weather, wildfire, and natural disasters.

⦁      Measures to improve the resilience, reliability, safety, and security of energy infrastructure.

⦁      Support for innovative approaches through an Electric Grid Reliability and Resiliency Programme, concentrating on the modernisation and upgrading of the electric transmission and distribution infrastructure, and storage.

⦁      Measures to facilitate the use of natural gas and hydrogen in transportation and provides funds for the establishment of the necessary infrastructure.

⦁      Establishment of clean hydrogen hubs in regions with the greatest natural gas-producing potential, to leverage natural gas to the maximum extent practicable.

⦁      Grants to establish charging and fueling infrastructure, including for natural gas and hydrogen fueling.

⦁      Support for establishing a regional energy hub in the Appalachian region for natural gas and natural gas liquids, including hydrogen produced from steam methane reforming of natural gas feedstocks.

⦁      Support for methane and carbon reduction measures and infrastructure, including plugging and reclaiming abandoned oil and gas wells.

⦁      Help for young companies to pilot and scale-up new and emerging technologies.

⦁      Contributions to the funding of pilot and demonstration CCUS projects.

⦁      Support for the energy storage industry, including demonstration projects and manufacturing investments.

⦁      Green hydrogen research and development and creation of a Clean Hydrogen Electrolysis Programme to increase the production of clean hydrogen at a lower cost.

⦁      Support for the development and demonstration of clean energy technologies, including development of a skilled energy workforce.

In addition, the US Energy Information Administration (EIA) will be directed to “prepare and submit a report on the potential use of levelised cost of carbon abatement as a metric to compare system-level costs of technology options to reduce emissions, and a potential process to measure carbon dioxide emission intensity per unit of output production.” 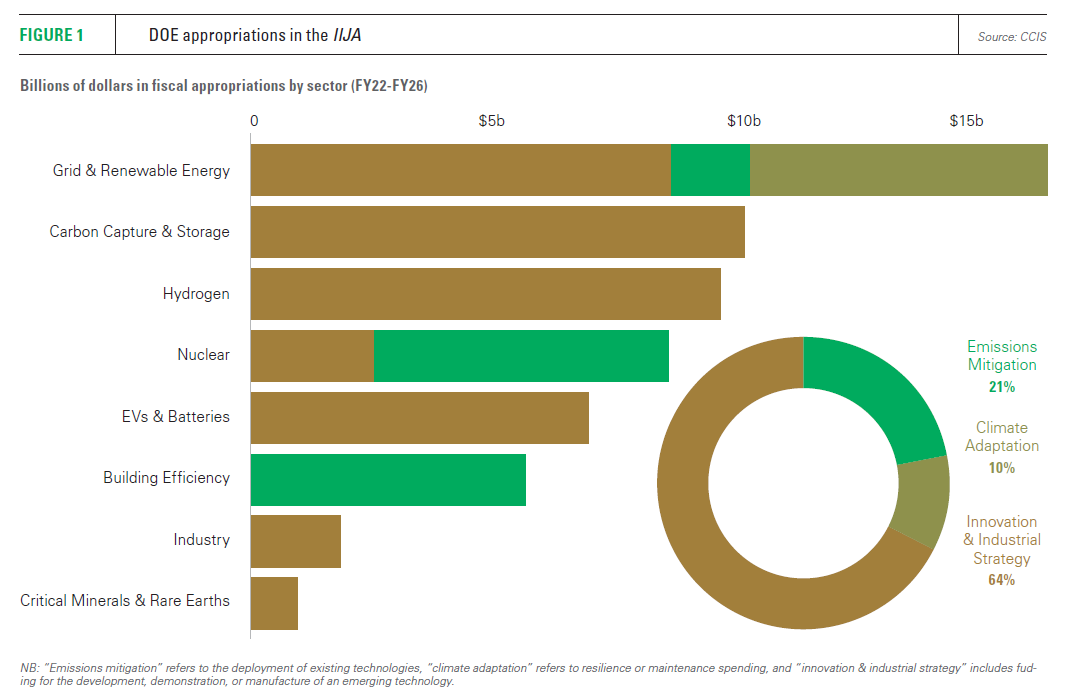 Implementation of IIJA falls mostly on the shoulders of the Departments of Transportation (DOT) and Energy (DOE), but also the states themselves that control most infrastructure. About two-thirds of all funds appropriated for the DOE go to innovation and industrial strategy (Figure 1).

Through increased investments and regulatory changes, the IIJA has the potential to revolutionise the US energy industry and prepare it for the evolving new clean energy era by accelerating deployment of hydrogen, CCUS and new nuclear capacity. It will also help adapt natural gas production and infrastructure for life in a world driven by emissions reductions and climate change mitigation.

The IIJA places special emphasis on carbon management, providing more than $6bn for research, development and demonstration of CCUS technology. It specifically states that “carbon capture, removal, and utilisation technologies require a backbone system of shared carbon dioxide transport and storage infrastructure to enable large-scale deployment, realize economies of scale, and create an interconnected carbon management market,” and includes measures to provide these over the next five years.

⦁      $2.5bn to “to carry out activities for carbon storage, validation and testing.”

⦁      $2.7bn to “support the construction of infrastructure for transporting carbon dioxide.”

An additional $500mn is made available over four years to fund demonstration projects for reducing greenhouse gas (GHG) emissions from industrial sources.

The impact of the IIJA on actually reducing emissions may be only modest, but it is supporting the developments of new technologies to achieve that.

Emissions reduction at significant scale – estimated at over one gigaton by 2030 - will come from the BBBF that includes $555bn in climate and energy measures, including tax incentives for solar, wind and storage, that could give a major boost to these sectors. It also includes production tax credits for operating nuclear plants and provisions to help decarbonise the electric grid and heavily polluting industries such as steel and cement. But even though the emphasis is on clean energy and renewables, it does not exclude oil and gas.

An important part of the BBBF bill is a methane tax that aims to limit leakage and emissions. The US joined the EU and another 100 countries at COP26 to pledge a 30% cut in methane emissions by 2030, and this bill could help achieve this pledge. But this provision may struggle to survive the Senate intact, with the oil and gas industry lobbying hard against it.

The industry is also lobbying against restrictions of federal land leasing, especially offshore and in the Arctic region. But the biggest objection is the proposed increase in leasing costs, in some cases by five times.

IIJA and BBBF together can help modernise the US energy system and infrastructure, transition to a clean energy economy and help achieve the US’ climate change goals.

The IIJA will give a major boost to the development and deployment of clean energy. But it does not go out of its way to scale back the future use of natural gas. Many of its provisions envisage a role for natural gas well into the future as part of the energy transition, but also longer in a cleaner form – as blue hydrogen produced from natural gas combined with CCUS. But undoubtedly the biggest winner of IIJA is hydrogen.

Indeed, the EIA sees natural as an integral part of the US future energy mix, with production expected to grow by 2% in 2021 and 2.8% in 2022, with the additional gas feeding exports. What the IIJA does is to ensure that gas consumed in the US becomes increasingly decarbonised.

There seems to be increasing realisation both in Europe and the US that achieving a balance between the decarbonisation and security of energy supplies is critical to ensuring an affordable, reliable and orderly transition. Europe is about to relax its taxonomy rules to include natural gas and nuclear energy ‘temporarily’, up to 2030. The US has notably decided to lift the moratorium and continue leasing federal lands for oil and gas exploration.

However, the EU and the US will need to do more to engage the oil and gas industry to help achieve this balance. After all, these fuels will be needed for a long while yet.

Clearly unintended, but the IIJA may be heeding the message from the 23rd World Petroleum Congress (WPC) that took place in Houston earlier this month: “accelerate the energy transition while recognising the role of oil and gas,” albeit with CCUS, in a cleaner global energy mix. As Darren Woods, CEO of ExxonMobil, said at WPC: “it is critical to strike the right balance.” In the US, the combination of IIJA and BBBF may actually go a long way towards achieving that.