The $437bn Inflation Reduction Act (IRA) was passed by both the US Senate and by the House of Representatives and was signed into law by president Joe Biden on August 16. It is a slimmer version of the, now dead, Build Back Better Act, but still a major achievement. Biden called it “one of the most significant laws in our history,” reflecting its importance in fighting the climate crisis and lowering healthcare costs. He added “This bill is the biggest step forward on climate ever.”

Despite its misleading name, the act’s single largest component, $369bn, is dedicated to energy security, climate change and clean energy investments over the next decade. In fact, the IRA will be the single largest action ever taken by Congress and the US government to combat climate change – it is in effect a climate change act. It got its name because it “will address inflation…by lowering energy and health care costs”, but some argue that claiming that “spending reduces inflation is Orwellian doublespeak.” The IRA will actually have little impact on inflation.

Nevertheless, the IRA is a major turnaround for the US, renewing focus on climate change and energy. It is expected to reduce US emissions by about 40% by 2030 compared with 2005 levels, on aggregate, by “electrifying things that currently run on fossil fuels, and by generating more electricity from alternate sources. At the same time, the bill would preserve a role for oil and gas in energy production over the near term.” The latter was something senator Joe Manchin insisted on in exchange for his support. In particular, he secured elements that boost offshore oil lease sales and speed up permitting for gas pipelines. He said that the legislation was designed to ensure the US becomes energy self-reliant in the future. He added, “you have to have energy security, you have to be energy independent if you want to be a superpower in the world.”

In terms of energy security and clean energy IRA’s provisions include:

The IRA investment will be paid for through new taxes. These include a 15% tax on large corporations and a 1% tax on stock buybacks, raising over $700bn revenues over 10 years. The surplus revenues will be used to reduce the US deficit.

With the US being the world’s second biggest emitter, after China, this could have a significant impact on global emissions. According to the Rhodium Group – Princeton University, it will go a long way in helping the US to meet its goal to achieve a 50% to 52% cut in emissions by 2030 (see figure 1).

But more effort will be needed. New federal regulations for power plants, transport pollution, and methane emissions will still be needed to make up the rest of that gap.

The act is expected to unlock major investment in US climate action and clean energy and accelerate development of renewables in the US. 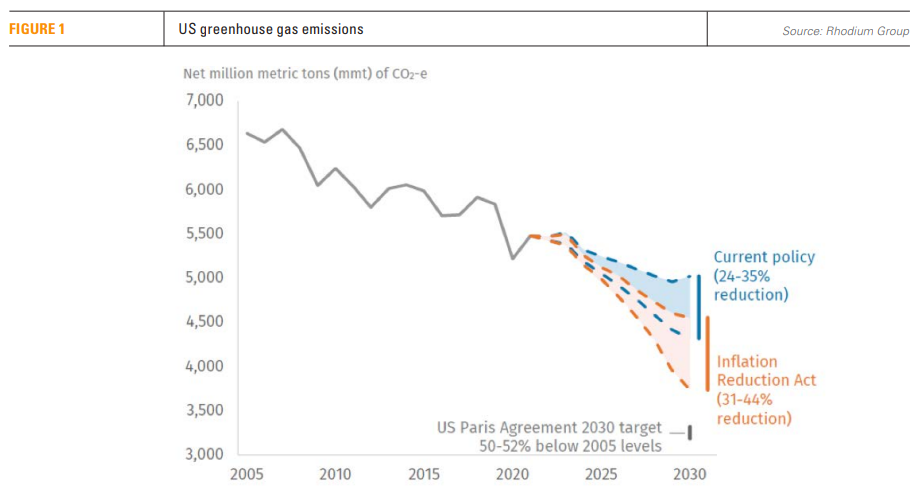 A central element of the IRA is a multitude of tax credits to boost wind, solar, and other renewable power sources. It also includes incentives for investing in carbon capture and storage (CCS) technology. One of its key provisions is to raise tax credit from $50/metric ton of captured carbon dioxide to $85/mt. It also lowers the emission threshold to allow more companies to qualify for the tax credit.

The tax credits would also be available for new technologies including utility-scale batteries, needed to facilitate a bigger share of renewables in the grid. Nuclear power also gets financial support.

When it comes to clean energy, the IRA promotes a ‘Made in America’ energy transition designed to create jobs and compete with China’s dominance of the clean energy supply sector. It includes $60bn in incentives and financing for boosting domestic manufacturing of clean energy technologies, including solar panels, wind turbines, batteries, and critical minerals, and to help build the facilities needed to make electric vehicles.

Electric vehicles will have to be assembled in North America, with the lithium, copper and other critical minerals used in the cars to be extracted from mines in America or friendly countries that have free trade agreements with the US. This could go a long way towards realigning global clean energy supply chains.

The IRA also allocates $27bn to create a National Green Bank that would help leverage private funding for clean projects and $60bn for pollution reduction and environmental justice.

It also includes money for many other climate priorities, including investing in forest and coastal restoration and in resilient agriculture and $9bn in rebates and tax credits for Americans buying and retrofitting homes with energy-efficient and electric appliances.

The IRA includes new opportunities for the oil and gas sector.

These include a proposal to reform the National Environmental Policy Act, which controls federal permits for pipelines and other infrastructure. The IRA will pave the way for continued oil and gas leasing and drilling in the Gulf of Mexico and Alaska’s Cook Inlet. It also requires that the federal government continue to hold regular auctions for oil and gas leases alongside any new plans for wind or solar projects on federal land. 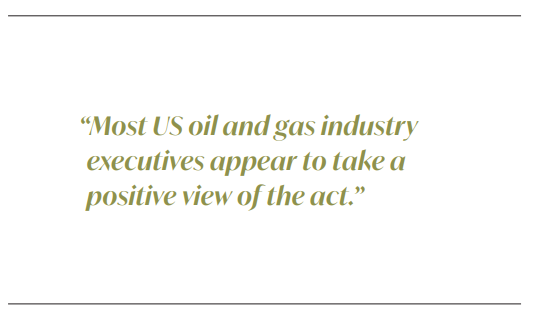 These provisions are a realistic compromise on the future of oil and gas. It is an apparent recognition of the role oil and natural gas will play while the long-term energy transition is underway.

The IRA also includes support for new energy transition technologies. This is where the oil and gas industry sees advantages. ExxonMobil and Chevron have put CCS, hydrogen, and biofuels at the heart of their low-carbon businesses. All of them get new and bigger incentives that will help make such projects more viable.

However, the IRA also includes new penalties on methane emissions. Companies that comply with minimum methane emission regulations would be exempt, but those that exceed the 2024 limit will incur penalties of $900 per ton of methane, rising to $1,500 per ton in 2026. Collected funds will be injected into pollution cleanup.

There’s also a new fee on all methane extracted from public lands and waters, including on gas that is later vented and flared. And to enforce all this, the IRA allocates additional funding for monitoring methane leaks for oil and gas operators and the Environmental Protection Agency.

Most US oil and gas industry executives appear to take a positive view of the act.

The CEO of Occidental Petroleum (Oxy), Vicki Hollub, described the IRA as “a net positive,” particularly in terms of CCS. She added that Oxy is planning to reduce its methane emissions, so it expects to be shielded from the fee that the act would impose. The company also expects to benefit from leases in the Gulf of Mexico.

ExxonMobil said it likes the bill’s incentives and tax credits for new forms of energy, such as low-emissions hydrogen and biofuels that could take the place of conventional fossil fuels in the longer-term. Its CEO, Darren Woods, said “it is encouraging to see the recognition and the desire to try to catalyse investment in this space because, as we’ve said, we think they’re going to be absolutely critical to society,” adding that the IRA is “a step in the right direction.” 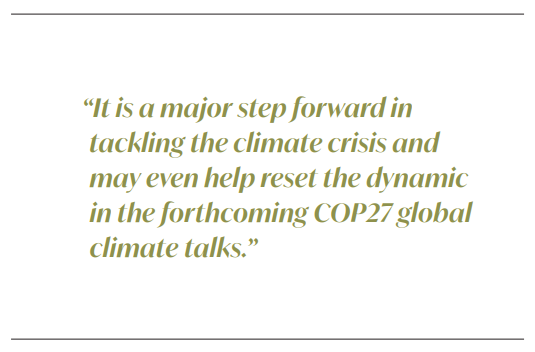 BP CEO Bernard Looney said that the IRA could help the company’s conventional oil production and its clean-energy business, adding that “I think it is attempting to strike a balance, which I think is quite sensible and pragmatic.”

However, not all US oil and gas companies are enthused with the IRA. Some of the smaller independent producers are concerned about the methane emission penalties and higher payments for drilling on federal land. They warn that these may impact investment.

On the other hand, Cheniere Energy CEO, Jack Fusco, welcomed the IRA, saying “I believe the permitting reform that’s currently being talked about in [the IRA] is a very positive development.” The company plans to apply for federal permits to expand its operations in Louisiana and Texas.

The president of the Business Council for Sustainable Energy, Lisa Jacobson, called it “the most sweeping legislation to pass the Senate to address climate change, both in terms of emission reductions and improving the nation’s energy infrastructure and resilience.” Indeed, it is the most important climate act in the history of the US.

Its importance must not be underestimated. The IRA will accelerate the greening of America’s economy. Headlines that welcomed it included: ‘The bill is a generational opportunity’, ‘it could change the global weather’, ‘total game-changer’ and so on. It also gets a thumbs-up from the financial sector, with investors confident that the IRA will “translate into expanded real-world deployment of low-carbon energy.”

IRA’s tax credits will super-charge investments and help diversify clean energy supply chains, expand US domestic capacity to produce the clean technologies that are needed to achieve deep decarbonisation, and enable deployment of record levels of wind and solar energy. With a 10-year time horizon, it allows “for long-term planning and should avoid some of the boom-and-bust cycles that have dogged the clean energy industry for years.” Confirming this, Jereme Kent, CEO of wind developer One Energy, said “It’s an extremely attractive proposition for us because it gives us — and more importantly our financiers — a long-term horizon to look at for the first time.”

Through policies aimed at persuading American consumers and industry to move away from reliance on fossil fuels in the longer-term, it can also help improve US energy security by reducing energy imports and exposure to volatile global fossil fuel prices.

A key impact of the IRA is to drive as much renewable development as possible in the heaviest-polluting parts of the economy, transportation and power generation.

Initial assessments of the IRA indicate that “it is likely to drive the first sustained decline in consumption of petroleum fuels and natural gas in US history.” The Princeton-led REPEAT Project sees the act driving down US consumption of petroleum products by roughly 13% from 2021 levels by 2030. Natural gas use would also be lower than projections under current policy, by as much as 8% over the same period.

The IRA also has strategic implications for US allies in Europe and Asia. It provides “assurance that the US will lead [the climate change fight] from the front and take tangible, durable steps to decarbonize its economy at home.” Equally important is “the apparent recognition of the immediate role oil and natural gas will play while the long-term energy transition is underway.” As the EU looks to end its dependence on Russian gas, US LNG exports have become even more crucial to European energy security.

Unquestionably, the IRA takes the US a long way from the bleak picture a few weeks ago, when it looked as though this administration would have few and limited regulatory options left for tackling energy security and climate change. It is a major step forward in tackling the climate crisis and may even help reset the dynamic in the forthcoming COP27 global climate talks.