Although new pricing formulas have proliferated in recent years, the majority of LNG is still sold on long-term contract indexed to oil, usually with a lag of about six months. The fall in the oil price will serve to even out the large disparity between spot LNG prices and long-term contract prices linked to oil, but only by bringing both to very low levels -- in some cases below the combined cost of producing or acquiring feedstock gas, liquefaction and transportation.

Take for example Qatar’s huge planned enlargement of LNG production from its North Field, which would be sustained largely on the back of revenues accruing from the co-production of condensate. In the space of a month, those projected revenues have been cut by more than half. 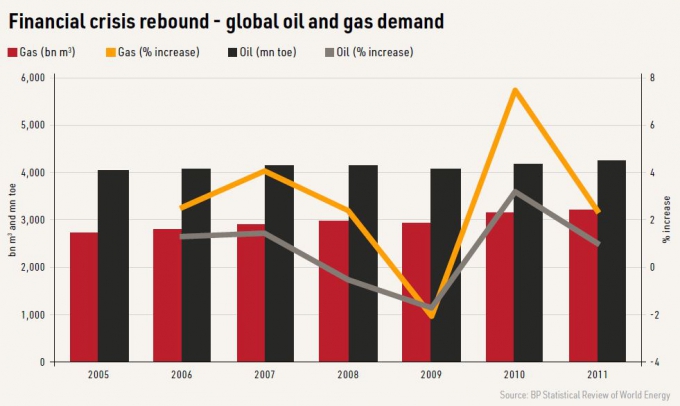 In the US, oil prices hovering around $30/barrel for Brent and below for the US marker crude West Texas Intermediate herald a major contraction in shale production.

Break-even levels vary between shale plays, but only a very small minority of producers will be able to cope with sub­-$40/b prices let alone sub-$30/b. Forward price hedging will protect some producers in the short term, but not if low oil prices are sustained.

US gas production’s near constant expansion over the last decade reflects the upstream connection with oil as almost all shale wells produce a combination of liquids and gas. There have been few periods like today, when US shale has been tested by both low oil and gas prices.

From 2015, when Saudi Arabia also embarked on a strategy of maximum output, US gas production plateaued and then fell before recovering when the Opec+ group was formed, throwing a life line to US shale producers by cutting production.

However, with the US shale sector again likely to experience severe contraction, the outlook for final investment decisions on new LNG plants is poor. Not only do the export economics look very weak, despite cheap domestic feedstock, but the continuing domestic output expansion on which they are predicated may now simply not occur in the time span developers had previously expected.

A key question is how long will the oil price remain low?

Oil prices were already falling as the implications of measures taken to contain Covid-19 became clearer. This reversed a period of optimism at the beginning of the year in which the US and China approved phase one of a trade deal and a hard Brexit was avoided. China’s ability to honour its side of the trade agreement, in terms of purchases of US energy and other goods, now seems hugely constrained, particularly given that the commitments looked over ambitious in the first place. 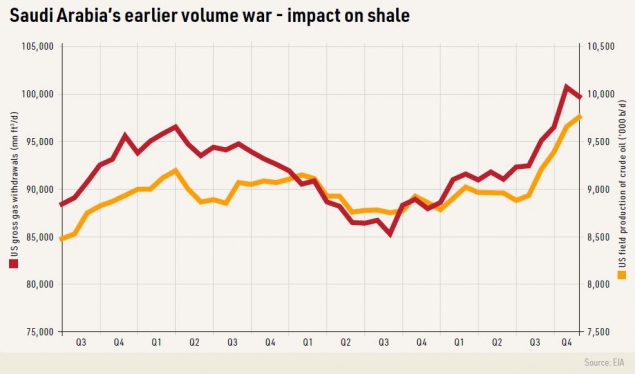 With demand falling due to Covid-19, Saudi Arabia pushed for deeper and longer cuts in production both from its own members and from the other oil producers which make up the Opec+ group, of which Russia is by far the most important. However, Moscow refused and Saudi Arabia responded by turning on the taps, presenting oil producers with a stark choice – either pull together and limit output or face all out competition. Russia has chosen all out competition.

It is a battle which Saudi Arabia can win, but only at great cost. The kingdom’s 2019 budget was expansionary and based on an unrealised oil price of around $80/b. Its 2020 budget is much more modest, but still assumes an oil price in the low $60s/b and incorporates some heavy cuts in government spending. Even though Saudi Arabia can offset the fall in price with greater output, an oil price in the low $30s for Brent means it will have to cut spending more and fall back on its substantial foreign currency reserves.

Saudi Aramco officials have been briefing the media that is it comfortable with oil around $30/b and that it can sustain output of 12mn b/d for a year without the need for further spending. Not only that, but it intends to launch a new program to expand its capacity to 13mn b/d.

This is fighting talk, but does not reflect the Saudi government’s spending commitments, owing to its involvement in the Yemeni civil war and its plans for economic transformation.

Riyadh’s strategy could have one of three outcomes: it drives higher-cost oil supply out of the market, mainly via the contraction of US shale oil production; it forces Russia back to the negotiating table and a new agreement on output restraint is reached amongst the Opec+ group; or Opec – for which read Riyadh -- buckles and takes on the burden of price stabilisation alone.

If current policy positions are maintained, oil prices are likely to remain in the doldrums well into 2021, if not longer.

However, the unprecedented nature of the current situation stems from both the demand and the supply sides – Saudi Arabia’s volume war and the demand destruction of Covid-19.

Responses to the spread of the virus have caused a near cessation in non-essential travel with analysts now suggesting that the loss to oil demand could be as much as 10mn b/d.

Oil tanker rates have rocketed not just because of the volumes of oil pushed out by Saudi Arabia, but by the pressing need to find storage; putting oil on a tanker and letting it sit around is one option, albeit an expensive one.

This is also a more immediate concern; oil and gas supply chains cannot cope with such a rapid and unexpected drop in demand. As storage options are exhausted, refineries will stop refining and, further upstream, production will be shut in because there will be nowhere for the oil and gas to go.

The downturn in the oil and gas industry will add significantly to the recessionary forces swirling around the global economy.

Although too early to assess the full impact, the situation is comparable in magnitude with the 2008/09 financial crisis. This effectively reset former notions of both short and long-term energy demand, shifting the whole energy demand curve downwards. For the second time in just over a decade, GDP growth will be lower for a period and start again from a lower base before returning to its long-run potential.

While the financial crisis was not the only factor at play in these revisions, (and the 2007 WEO itself was somewhat exuberant in terms of expected growth), it did reset long-term forecasts on a lower footing.

It even had a silver lining. At the International Association for Energy Economics conference in Vienna in September 2009, Fatih Birol, then IAE chief economist and now the agency’s executive director, declared that the climate change targets of the time “were no longer a fantasy.”

At the time of writing many countries around the world, including major economies, have declared emergency measures and even states of emergency in an effort to contain Covid-19, but there are also signs that infection rates in China have peaked. Pandemics do not last forever and a return to ‘normality’ will eventually occur, probably towards the end of the year or in 2021.

There should then be a substantial rebound in oil and gas demand, as there was after the 2008/2009 financial crisis. It is here that the oil and gas markets could potentially diverge.

Assuming Covid-19 is defanged this year and the world economy avoids a recessionary spiral as a result of major government interventions, 2021 could start to look a lot better for LNG.

Long-term oil-indexed contract prices will remain low, but spot LNG prices could make a comeback if some production is shut in this year and new planned trains in the US delay commissioning. A further boost might come if major new LNG projects, the economics of which are dependent on the co-production of condensates, are also shelved for the time being.