Extreme winter weather in the US caused serious and wide-ranging disruption in mid-February. Nowhere was this more apparent than in Texas, for a variety of reasons including the fact that much of the state’s infrastructure is not designed to withstand below-freezing temperatures. The impact on oil and gas operations was profound, with Texas’ dependence on natural gas for power generation further exposing the vulnerabilities in the state’s energy system.

The full impact is still being assessed, and much of it will be short-lived for the energy industry, with a recovery underway in the days after the winter storm’s arrival as temperatures rose. However, there will be pressure to learn lessons and take steps to be more prepared for such extreme weather in the future.

To some extent, cold winter weather is to be expected in the US, with gas demand and prices rising as a result of increased heating usage. But Winter Storm Uri was far more severe than expected and it also hitting parts of the country that are not used to extremely low temperatures.

“This is unprecedented in terms of the scale of and length of the cold snap, and where those temperatures hit,” Enverus’ senior vice president of power and renewables, Bernadette Johnson, told NGW. “Gas prices blowing out is a direct result of supply/demand – too much demand and too little supply, in specific areas like Texas and the Midcontinent,” she said.

Indeed, spot gas prices briefly shot up to record highs in various regions – though Moody’s Investors Service noted that futures did not rally. In Oklahoma, the Oneok Gas Transmission (OGT) price soared to $1,250/mn Btu on February 17 before crashing back to around $4/mn Btu the following day.

Across the major hubs in Texas, all-time price records were set on February 16, though this is based on records that only go back to 1993. Nonetheless, prices at the Katy Hub hit $352.64/mn Btu and reached $400/mn Btu at the Houston Ship Channel, having been trading at around $4.50/mn Btu at both hubs the previous week.

“In Texas and surrounding states, one of the main problems is gas pipeline network really isn’t designed to move large quantities into Texas,” noted Johnson. “It’s typically the opposite. Texas is usually a net exporter of gas and the pipeline grid is designed to facilitate the flow of gas to the Gulf Coast and up to the Midcontinent (like Chicago/Michigan) during the winter. Not only was it cold in Texas, but it was also cold everywhere east of the Rocky Mountains.”

The challenges this caused were compounded by a host of other problems, including well freeze-offs and disruption to other infrastructure – again, especially in Texas, where most of it had not been winterised.

“The unusual drop in temperatures to below freezing in producing fields caused widespread operating complications, including freezing water and other liquids at the wellheads or in above-ground gathering facilities, blocking the flow of natural gas and oil and causing widespread production outages,” Moody’s said in a February 19 note. 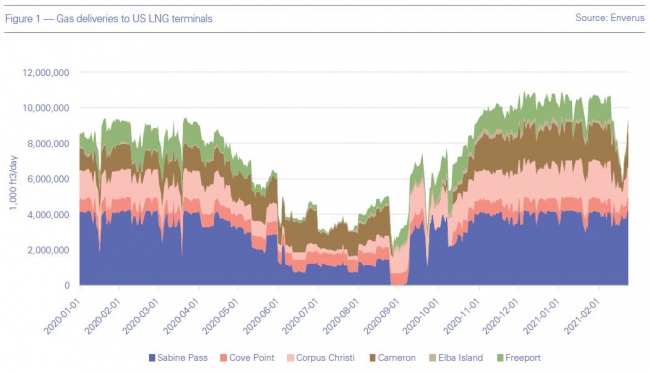 The US Energy Information Administration (EIA), using data from consultancy IHS Markit, has estimated that US gas output fell by about 21bn ft3/day over February 8-17, down 23% from almost 91bn ft3/day immediately before the freeze hit.

Texas was affected the worst in terms of gas production outages as well, with the EIA estimating that more than 10bn ft3/day had gone offline in the state. Other nearby regions such as Louisiana’s Haynesville shale also saw significant outages.

On the midstream side, Moody’s said it expected gathering and processing companies and compression operators in the central and southern US to be the most exposed to the disruptions of supply.

The gas production outages, in turn, exacerbated the pressure on power plants in Texas, which were already struggling with non-winterised equipment failures as demand for power shot up.

“This was a record demand level for the winter,” said Enverus’ Johnson, noting that Texas’ peak power load is typically in the summer. “It was 3.3 GW higher than the previous high in winter 2018.”

This level of demand had not been anticipated by the Electric Reliability Council of Texas (Ercot), which manages most of the state’s power grid, in its scenario for an extreme winter weather event. Subsequently, net generation fell at least 30 GW short of Ercot’s day-ahead forecast demand on February 15, according to the EIA. The gap between generation and demand subsequently narrowed but a shortfall nonetheless persisted for several days.

“It appears that a lot of the generation that has gone off-line today has been primarily due to issues on the natural gas system,” Ercot’s senior director of system operations, Dan Woodfin, told reporters on February 16.

This created something of a vicious circle, with gas production losses putting pressure on the power grid, while power outages further affected the ability of energy infrastructure to continue operating.

The resulting crisis prompted Texas Governor Greg Abbott to order a ban on natural gas leaving the state between February 18 and February 21.

While critics said the move was in violation of the US Constitution’s commerce clause, Abbott said the disaster declaration he issued on February 12 gave him the ability to impose such restrictions as millions of Texans remained without power. This had a direct impact on Mexico’s national generator, which relies heavily on gas piped from the north. And LNG export plants on the US Gulf Coast were also hit as feed gas fell sharply. Freeport LNG in Texas was reported to have gone completely offline for several days, moving to restart its third liquefaction train on February 23. Cameron LNG in Louisiana also went offline, though this was attributed to the facility losing power. All three trains at Cameron had been restarted by February 23.

Cheniere Energy, the US’ largest LNG producer, managed to keep its Corpus Christi, Texas and Sabine Pass, Louisiana facilities operating through the crisis, but feed gas deliveries are estimated to have fallen to around 25% of pre-storm levels during this period.

Consultancy Wood Mackenzie estimated that around 10-15 US LNG cargoes had been taken out of the global market for March delivery as a result of these outages.

A recovery is now underway, and while much of the impact is expected to be short-term, longer-term lessons are also being identified.

Moody’s noted that volumes would return quickly for gas producers affected by outages, and that the spike in gas prices would have limited financial impact on their February earnings, given the shortfall in output. This was echoed by Enverus’ Johnson, who said well-head freeze-off production had already returned as of February 23. She added, however, that about 1.2bn ft3/day of Texas production in Enverus’ pipeline flow data was still offline that day.

Johnson also expects no lasting impact on US LNG exports. “LNG terminals have storage on hand and can handle several days or more of reduced gas supply,” she said.

Moody’s said that despite the short-lived nature of some of the impacts, the widespread disruption has highlighted “the relative fragility of the energy supply, and the need for additional capital investment to help reinforce the system against similar disruption in the future”. The coming weeks and months will reveal whether such investment will be forthcoming.