US producers hope for a year of two halves [NGW Magazine]

The collapse of crude prices in March was initially given a positive spin: it would help boost US natural gas prices in late 2020 and into 2021. The thinking behind this was that as associated natural gas production – especially in the Permian Basin – fell as oil drillers scaled back activity, the US gas glut would be eased, bolstering gas prices: the best cure for low prices being low prices.

However, the demand destruction that has resulted from Covid-19 proved worse than initially expected in March – before much of the world went into lockdown in an effort to contain the virus. This has led to a growing number of LNG cargoes that were due to be loaded from US export terminals over the course of this summer being cancelled. And this, in turn, is among the factors that have pushed US Henry Hub benchmark gas prices to 25-year lows.

Both dry and associated shale gas production had been booming in the US, with the country’s total gas output setting a new record of almost 34 trillion ft3 in 2019. However, the glut had been weighing on gas prices for some time, while shale drillers started this year under more pressure than ever to demonstrate financial discipline and maximise returns.

“On natural gas prices, I think many in the market were too bullish – this year was always going to be a difficult year from a global supply and demand perspective, even pre-crisis,” Richard Gorry, a managing director at research firm JBC Energy, told NGW. Nonetheless, he said that in December 2019, JBC was projecting that US gas production would grow by 3.4% in 2020. Now, in the wake of the oil price war and Covid-19, the firm expects US gas production to fall by 2.8% this year instead. 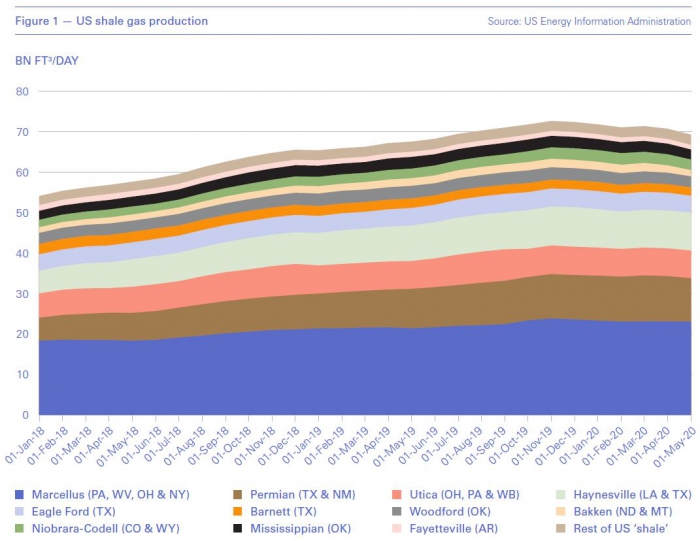 Backing up Gorry’s comment is the fact that US Energy Information Administration (EIA) data show production from the country’s leading dry gas shale regions – Appalachia and the Haynesville shale – on a downward trend since late 2019. A brief uptick came in March and April, before current market conditions brought about a swift reversal and the downward trend resumed.

Indeed, the EIA’s latest Drilling Productivity Report forecasts that Appalachia will see the biggest monthly production decline of any shale-producing region in the US between July and August, falling by 210mn ft3/day. By contrast, gas production in the Permian – where natural gas is primarily a by-product of drilling for oil – is projected to fall by 52mn ft3/day over the same period, with the decline rate in the basin having slowed in recent weeks.

Gorry agreed that this drop-off was primarily down to the price of natural gas, but noted that this had been building for some time. “It is increasingly difficult to make the economic case to invest in gas production in the short term,” he said.

The market had been bracing for a wave of US LNG cargo cancellations over the summer since lockdowns became widespread and the far-reaching impact of Covid-19 became clearer. Nonetheless, the number of cancellations to date has been higher than had been widely expected.

LNG terminal operators do not typically disclose details of commercial arrangements with buyers. However, recent media reports suggest that around 130 US LNG cargoes – including upcoming loadings scheduled for the remainder of July and for August – may have been cancelled since the start of this downturn so far.

Meanwhile, pipeline gas deliveries to US LNG export terminals are reported to have fallen from a record 9.8bn ft3/day in late March to below 4.0bn ft3/day by late June.

Hopes are now emerging that the worst will soon be over. Investment bank Morgan Stanley said in a recent note that it expects US export cancellations to peak in July and August at around 5bn ft3/day, equivalent to about 45 LNG cargoes/month, slowing to roughly 20 cargoes/month in September and October.

While the LNG market is expected to continue grappling with oversupply into 2021, there are signs of demand recovery in China and elsewhere, and a seasonal uptick over the winter, related to heating needs, is also expected.

This could play out within the US as well, boosting domestic gas demand for heating and pushing up prices. Gorry noted that the US National Oceanic and Atmospheric Administration (NOAA) was estimating the chance of a La Nina weather pattern forming and being in place this winter at 50-55%. “If this is correct, we could be in for a very cold winter, and we may see prices recover strongly late in 2020 and early 2021,” he said.

The US’ natural gas picture is complicated by the fact that associated gas from tight oil production has such a considerable impact. “We expect crude oil production to continue ‘driving’ the gas supply ‘bus’ for the foreseeable future,” investment bank Raymond James said in a recent note. The bank went on to say that based on its expectations for US oil production, it was forecasting a “sizeable” decline in gas supply relative to its previous model, falling by 1.8bn ft3/day in 2020 and by 0.5bn ft3/day in 2021.

Raymond James noted, however, that demand destruction this year was mostly being expressed through lower domestic industrial demand and LNG exports, while otherwise, domestic US gas trends were “relatively well-known and understood”. The bank expects that as demand rebounds, supply will not necessarily follow, which would help to drive up gas prices in 2021.

“All things considered, we remain of the view that the market response to the Covid-19 pandemic is setting up US natural gas prices market for a massive recovery next year,” Raymond James said.

Morgan Stanley agrees on the importance of the role oil prices will play, saying the outlook for US gas prices in 2021 largely hinges on them. However, its medium-term outlook is less bullish than that of Raymond James.

Morgan Stanley has projected that with crude prices roughly stable at around $40/barrel, the amount of oil output that shale producers have curtailed could fall to 500,000 b/d in the third quarter of 2020, compared with 750,000 b/d previously. If this plays out, it would also raise Morgan Stanley’s associated gas forecast by around 0.5bn ft3/day in the third quarter.

The bank says this rise in oil prices and likely resulting return of associated gas supply has “tempered the bull case for US gas prices into next year.”

JBC, for its part, also expects some short-term recovery, but is cautious in its longer-term expectations. “We would expect oil prices to be less volatile in H2 than in the first half the year. Of course, this shouldn’t be hard given that we had an oil price war and a global pandemic in the first six months of the year,” said Gorry. “The price stability should allow some producers to temporarily increase production but longer term the lower oil price environment will mean lower shale oil production and lower associated gas production as a result.”

He added, however, that US production can always surprise, particularly if oil prices were to rise $5-10/barrel, likely stimulating supply and creating even more volatility. The extent to which a recovery hinges on oil prices and weather patterns shows how vulnerable the US gas industry remains in this oversupplied market.

Shell Back in Black in Q3 (Update)