US LNG to the rescue? [Gas in Transition]

President Joe Biden has announced that the US will send an additional 15bn m3 (11mn mt) of LNG to Europe this year. The volume of promised gas is modest, when set against the 155bn m3 (114mn mt) of Russian gas Europe imported in 2021, but it reflects the limited ability of the LNG market to respond in the short term to what is a sudden and huge demand-side call on the sector.

LNG is traded through a combination of long-term contracts and spot sales, the latter in 2020 making up 40% of all sales, a record level. However, there is no predetermined quantity of LNG heading to Europe this year; trade flows in total are determined by the willingness of buyers to pay, which depends on the price of alternative sources of gas, other fuels and competition from other buyers.

The preponderance of long-term contracts reflects the way in which LNG plants are funded. Developers need to strike off-take agreements prior to taking a financial investment decision (FID) in order to secure finance. Buyers also benefit, as they fix a certain volume of LNG in advance, which can be used to supply gas to customers or traded, if the opportunity arises.

Prices are not fixed, but typically tied to a benchmark or combination of benchmarks (Brent crude, Henry Hub, or even spot LNG, for example the Japan-Korea Marker). Long-term contracts provide sales exclusivity, but do not necessarily determine the destination of the LNG. An Asian buyer of US LNG under long-term contract can deliver the cargo to Europe, if the price is right.

At the end of 2021, the US had just over 70mn mt/yr of liquefaction capacity, of which 66.41mn mt/yr was committed under medium and long-term contracts, according to data from the International Group of LNG Importers (GIIGNL). Of this, Asian buyers accounted for 37.44mn mt/yr, portfolio buyers 21.95mn mt/yr and European buyers 7.02mn mt/yr.

But, in late February, about 70% of US LNG cargoes were heading to Europe, according to ship tracking data.

However, Japan, South Korea, Taiwan, Singapore and China will all need a baseload of LNG, the majority of which will be accounted for by their existing off-take agreements.

Limited Asian storage capacities mean it is not possible to stockpile sufficient gas ahead of warm summers and cold winters. High temperatures boost demand for air conditioning and electricity, and thus gas-fired generation; cold weather increases demand for both heat and electricity.

If weather conditions are adverse, North Asian buyers will have little choice but to maximise the amount of LNG under long-term contract they consume and enter the spot market for additional cargoes. Only the more price-sensitive South Asian markets are likely to drop out of the spot market altogether at the cost of domestic gas shortages and power black outs.

LNG volumes in portfolios have more flexibility, but portfolio players also have long-term supply deals as well as offtake agreements. This means much of their capacity is also committed.

Yet despite the ongoing impact of COVID-19, Chinese LNG demand is on a strong upward curve as increased gas supply is a core part of the country’s coal-to-gas switching plans, which, in turn, are essential both for reducing air pollution and greenhouse gas (GHG) emissions. Chinese LNG imports in 2020 amounted to 68.91mn mt, up 11.7% on 2019. China’s LNG imports last year rose just over 18%, with 9.2mn mt sourced from the US, up almost 200% on 2020.

A European rush for US LNG and any other LNG available, means Russia’s invasion of Ukraine is having serious consequences for China. It will have to pay more for its LNG, a cost in the past borne largely by its state-run importers.

The country had 35.75mn mt/yr of LNG on long-term contract in 2020 and a further 14.33mn mt secured through portfolio contracts, making a total of about 50mn mt/yr (see table 1). Chinese buyers in 2020 signed up to a further 2.5mn mt/yr in long-term contracts and 3.32mn mt/yr in short-term contracts, and continued to buy in 2021, including booking US capacity. Despite the rising volume of contracted LNG, China remains a major spot buyer and will be competing with Europe to secure volumes for the foreseeable future. 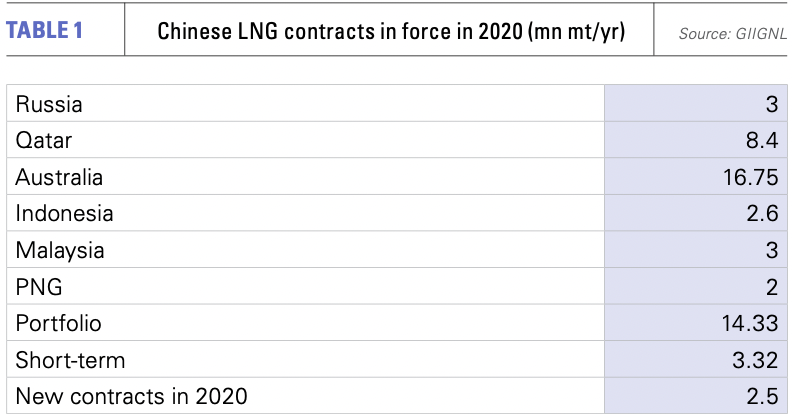 As of the week March 17-23, EIA data shows LNG pipeline receipts running at 12.9bn ft3/d, indicating that US LNG plants are already running at or close to peak capacity.

The Calcasieu Pass LNG facility delivered its first cargo in February 2022, ahead of schedule, but with Japan set as the destination. All of Calcasieu Pass’s 18 small modular units are expected to be in operation by year’s end, totalling 10mn mt/yr capacity.

Of this, 3.5mn mt/yr has been booked long-term by China’s Unipec, a subsidiary of Sinopec. However, the project, which is being developed by US company Venture Global, also has off-take agreements with European companies – Edison (Italy), Galp (Portugal), Repsol (Spain) and PGNiG (Poland), as well as with oil majors Shell and BP.

In addition, Train 6 at the Sabine Pass plant began producing LNG in November 2021 and will become fully operational this year, adding 5mn mt/yr capacity. According to the EIA, optimization at Sabine Pass and Corpus Christi has increased capacity at the two plants, adding a combined 0.7bn ft3/d (5.3mn mt/yr), which should be available to the spot market.

Longer term, the US’s ability to supply more LNG to Europe is large. Golden Pass LNG will be the next major project to come online, adding 10.4mn mt/yr in 2024 from two trains and a further 5.2mn mt/yr from Train 3 in 2025, if all goes according to schedule, but there is then a hiatus in new project completions. 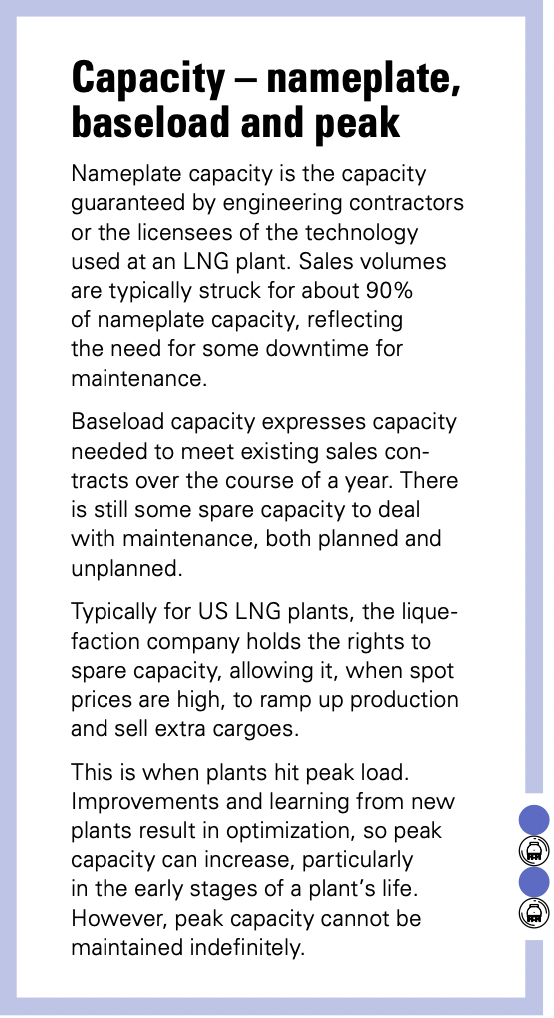 Further expansion will take more time, owing to the pre-FID status of additional projects. The EIA says FERC and the US Department of Energy has approved ten more LNG plants and capacity expansions at three existing plants, totalling 25bn ft3/d (190mn mt/yr). Many of these projects have still to complete permitting and land sufficient off-take agreements to secure investment finance.

Venture Global’s Plaquemines project has sold 14mn mt/yr of its planned 20mn mt/yr capacity, the most recent agreement being announced in March with New Fortress Energy (NFE) for 1mn mt/yr. The company said in mid-March that it expected to announce the sale of remaining capacity within weeks. Although pre-FID, construction has already started on the plant.

Developer Tellurian announced in March that it had started construction of its 27.6mn mt/yr Driftwood project, the first phase of which should deliver 11mn mt/yr of export capacity. Like Plaquemines, the decision to start initial ground clearing is pre-FID, an expression of confidence in the need for more LNG in the wake of Russia’s invasion of Ukraine.

But other projects are much further behind. Venture Global announced a 1mn mt/yr sales and purchase contract with NFE for LNG from its earlier stage Calcasieu Pass 2. This is the first offtake agreement for the plant, which will also have capacity of 20mn mt/yr.

Asian demand and the contractual structure of the LNG market mean Europe’s ability to import more LNG in the short-term is very dependent on the rerouting of cargoes from Asia to Europe.

The nightmare scenario is strong Asian demand. There would be a recourse to oil and coal-fired generation, with serious implications for GHG emissions, and LNG spot prices would be higher still, increasing the cost of Europe’s pivot away from Russian gas.

In terms of infrastructure, Europe has the capacity to boost LNG imports over 2021 levels via its existing LNG terminals, a key element of its plans to reduce its use of Russian gas by two thirds by the end of the year. 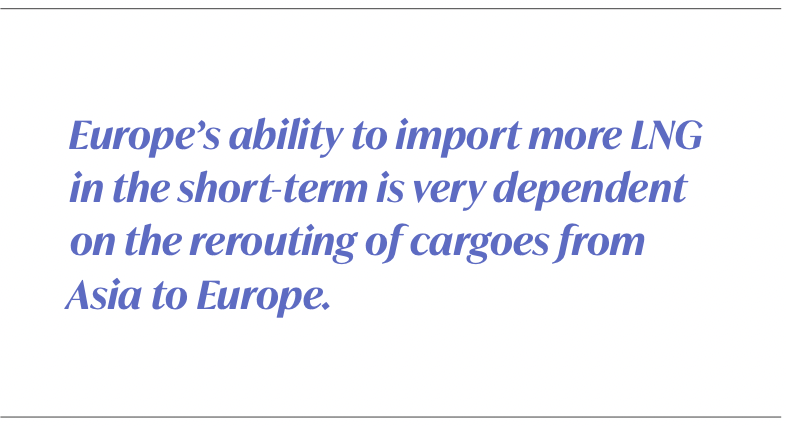 LNG imports to Europe hit a record high of 16bn m3 in January. However, while Europe has plenty of spare capacity for additional LNG imports in aggregate, some is in effect stranded, owing to a lack of onward pipeline connections, for example LNG terminals located in Spain and Portugal. Other downstream logistical limitations and bottlenecks are likely to emerge as gas flows alter from east-west to north-south and west-east. Europe will need to sustain its LNG imports through the year to make the most of its best-sited infrastructure, a process which it needs to engage in any case to refill its depleted gas inventories.

For US LNG to displace Russian gas imports, enormous commitment needs to be made in reordering gas flows within Europe and in terms of providing the demand certainty needed by US investors to invest in new capacity.

This will be difficult given the antipathy towards natural gas inherent in the energy transition, an area in which Europe leads and which is seen as crucial to the region’s long-term energy security.

It will take a decade at least to expand the US LNG sector to a size which would have a meaningful impact on European gas supply in terms of displacing the majority of Russian imports. This would mean building LNG plants the lifetime of which would extend at least until, if not beyond, Europe’s net zero carbon horizon of 2050.

Moreover, while the effects of Russia’s invasion of Ukraine will be profound and long-lasting, that does not mean there could not be some normalisation of Russo-European relations in the medium term. It may even prove essential in finding a solution to Ukraine’s long-term status.

European leaders are wary of the price impact of their current strategy on consumers. In addition, as the import of Russian gas is not sanctioned in the EU, companies are unlikely to ignore pipeline gas which is cheaper than imported LNG, if the political mood against Russia softens or becomes more pragmatic.

Europe is not the only region keen to book future US LNG. Chinese buyers are already stepping up their purchases. New US plants will almost certainly be built on the back of Asian demand for LNG as much as European demand. 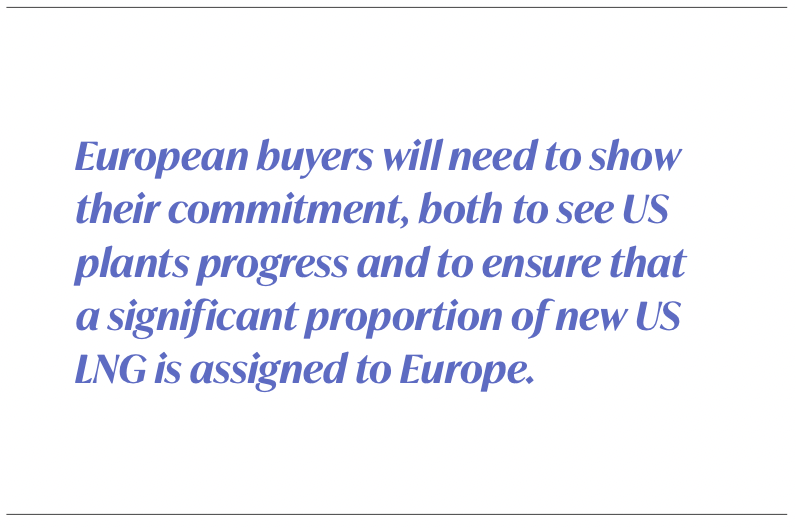 Developer Energy Transfer announced March 29 that it had struck long-term supply deals with two subsidiaries of Chinese gas group ENN for a combined 2.7mn mt/yr of LNG from its pre-FID Lake Charles project. The plant could be onstream by 2026 at the earliest with total capacity of 16.54mn mt/yr, but more offtake agreements will be needed to move to an FID.

European buyers will need to show their commitment, both to see US plants progress and to ensure that a significant proportion of new US LNG is assigned to Europe. Given the uncertainties governing the energy transition and Russo-European energy relations, a key question is the degree to which they prove willing to make long-term commitments.

Moldovagaz to buy gas from Energocom as well as from Gazprom

TotalEnergies to cut UK investment by 25% after windfall tax