The growth of liquefied natural gas production in the United States is a charged political topic because of the standoff between Russia and the West. Russian energy giant Gazprom recently shrugged off the potential for U.S. LNG exports in European markets, noting that Russia can beat the United States on price. But given the number of natural gas projects under construction in North America, it is only a matter of time before the United States is influential in global markets. With the low cost of oil and declining LNG prices, it is important to examine the markets where U.S. LNG exports are most competitive. Though export costs make it difficult for the United States to enter European and Asian markets, should oil prices begin to rise, the linkage between LNG and oil prices in Asia will make the United States more competitive, and subsequently influential.

In any attempt to undermine Russia's pipeline exports to Europe, the United States is at a disadvantage. Natural gas transportation by pipeline is significantly cheaper in most cases than building and employing expensive LNG port infrastructure. In terms of natural gas production and distribution, Russia's operating costs are low and their export infrastructure is already built. Some of Russia's most important markets, including those in Central Europe, already have spot prices around $6.60. Even now Russia's natural gas prices have not bottomed out, and prices at LNG hubs remain just as low. 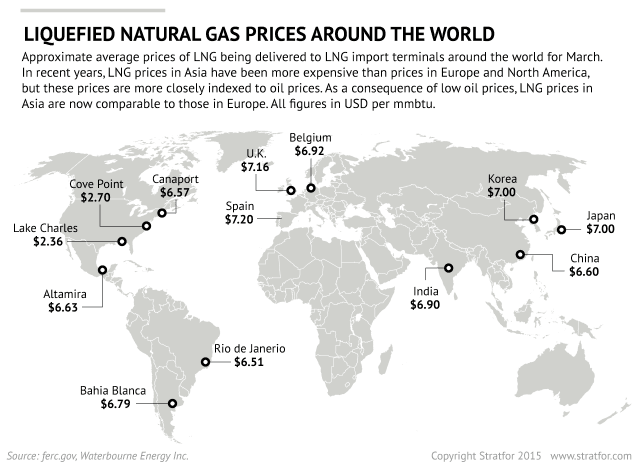 Meanwhile, prices in the United Kingdom are around $7.16 per one million British thermal units (mmbtu) and about $6.92 per mmbtu in Belgium. However, some countries, such as the Baltic states, have proved willing to pay a little more for U.S. natural gas to keep Russian influence at a minimum. Lithuania and Houston-based company Cheniere Energy Inc. have a nonbinding natural gas deal for purchases, but only if prices are somewhat comparable to European norms.

Existing contracts coming out of the United States are based off the Henry Hub spot prices index, with a fixed fee added for liquefaction and transportation costs. Cheniere has signed several 20-year contracts for its Sabine Pass LNG facility, located in Louisiana, on the border with Texas. The contract terms typically run about 115 percent of the price of U.S. natural gas (currently $2.81 per mmbtu) with an additional $3.00 per mmbtu for liquefaction fees. After other charges for shipping, insurance and regasification are factored in, the total cost of U.S. natural gas at LNG terminals in Europe is anywhere from $7 to $8. Comparatively, natural gas prices in the United States are relatively low and will probably increase regardless of oil prices — oil and natural gas prices in the United States are not linked. In short, the United States is only marginally competitive at current LNG prices and cannot beat Russia's low potential operating costs.

The same disadvantages the United States faces in Europe also apply to Asia. LNG prices to South Korea, China and Japan are about the same as they are in Europe, only the cost of shipping is more because of the longer distances involved. With new LNG export capacity coming online in Australia, the United States has to compete with projects that are as capital intensive but closer to their export markets.

The Scale of Influence

While the United States does not threaten Russia's market share in Europe, or eventually Asia, the potential for exported U.S. LNG does improve Europe's leverage against Russia by providing an alternative source to draw from. Moreover, it helps create an LNG price ceiling when negotiating with Russia or other providers of natural gas. In time, the growth of North American LNG will force traditional import partners to undercut the price of new sources of natural gas.

The exact scale of U.S. LNG exports is unclear and largely dependent on price. Most likely exports will be in the order of 50 billion cubic meters, a sizable addition to the global LNG supply. In addition, between now and 2020, the United States and Australia alone could increase the global LNG supply by as much as 150 bcm; the market in 2013 was just 325 bcm. The Sabine Pass LNG facility will ramp up production later this year, but other facilities still under construction will not see first production until 2017 or 2018 at the earliest. Russia and other competitors still have a few years to secure markets and undermine potential LNG contracts by offering lower prices.

The global growth of LNG markets will help European markets move away from contracts indexed to oil prices, as an alternative to creating natural gas pricing hubs. This will eventually enable natural gas and oil prices to decouple, as seen in the United States. This process is important for the European Union and is a cornerstone of its Third Energy Package and Energy Union Package. Even Russia has begun transitioning in some cases, the most notable example being Gazprom's May 2014 deal with Italy: Gazprom caved on the pricing mechanism to ENI, basing it on spot prices instead of Gazprom's preferred contracts, which are in turn based on oil prices.

Should oil prices increase, Asian LNG prices would see the biggest change, dominated as they are by oil-indexed long-term contracts. Because the Asian market is roughly five times the size of Europe's, most of the contracts signed by U.S. LNG exporters have been with the region. South Korea, China and Japan are also three top importers, offering more potential and greater opportunity.

The United States is also in a position to exploit local markets in need of natural gas, such as Brazil, Argentina and Mexico, countries distanced from LNG suppliers further afield. However, the overall LNG markets of Brazil, Mexico and Argentina are small, and all three are major energy producers in their own right. 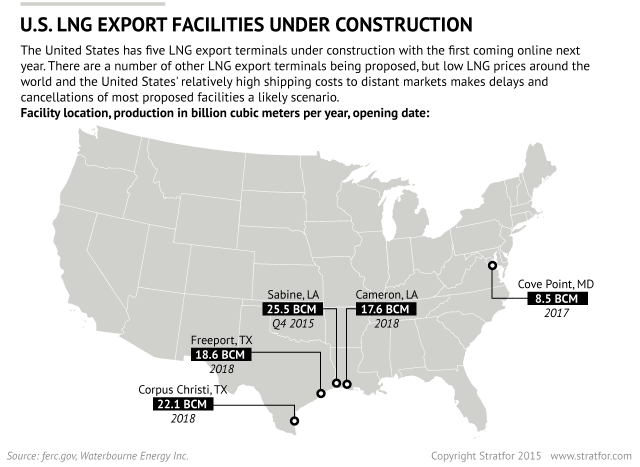 With all these factors in mind, the five U.S. LNG projects that are already under construction will eventually come online, much like those under construction in Australia. But many U.S. projects without final investment decisions will probably get delayed and may not even be built at all. The expansion of existing projects under construction is a more plausible option. Ultimately, the United States will not be able to compete with Russia in Europe and Asia directly. Rather, the addition of its sizable LNG exports to the global market will help Europe shift its contracts with Russia and lead to more opportunities in Asia.