US LNG: entering the EU from the east [GGP]

US LNG exports commenced in February 2016. All other conditions being equal, it would have been logistically more attractive for that supply to go to Europe rather than to Asia. Most US LNG plants are placed in the Gulf of Mexico, from where there is a short and direct way to the EU. In contrast, to reach Asian market, US LNG needs:

Under price levels which existed in Europe through 2016 until the first half of 2021, (since then the gas prices in the EU began to grow) sales of US LNG in the EU were mostly “out of the money.” They have covered at best their short-run marginal costs. Also, US LNG loses in the EU economic competition (even at the coastline, at the exit from regasification terminals, not considering the cost of delivering regasified LNG inside the EU) to Russian pipeline gas since the latter has the lower cut-off price in its key delivery points in mid-continental Europe, especially after the introduction of new modern pipeline systems – the Northern and Southern export semi-rings serving as integral parts of long-developed radial-circle system of Russian gas supplies to the EU (see Figure 1). 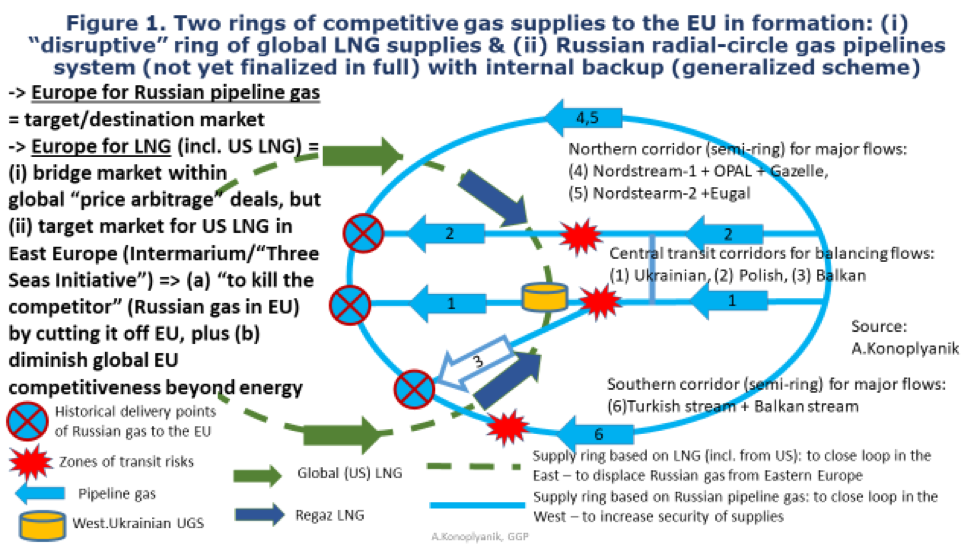 Russia has been developing such a system by adding two semi-rings to its historical gas transit corridors to Europe (see Figure 1). This new radial-circle system was aimed to consist of:

(ii) The Polish transit corridor (Yamal-Europe pipeline with a capacity of 33bn m3/yr), and

(iii) the northern semi-ring consisting of two non-transit offshore pipelines, each with a capacity of 55bn m3/yr, Nord Stream 1 (NS1) and Nord Stream 2 (NS2), though the latter’s launch was prevented by the US and Germany), with their onshore continuations, Opal and Gazelles, serving NS1, and Eugal, serving NS2.

(iv) the southern semi-ring TurkStream (31.5bn m3/yr), with its onshore continuation, Balkan Stream, with transit through a Turkish pipeline.

Both semi-rings were aimed to sphere the new system at the same delivery points of Russian gas located at the ends of Ukrainian and Polish transit corridors. The creation of such a radial-circle gas pipeline system with its internal backups both at the Russian territory (with switches between the lines) and within the EU (by connecting the flows through the same delivery points), increases the safety, security and competitiveness of Russian gas supplies to the EU.

In order to make US LNG sales in the EU profitable, it is necessary to remove Russian gas from the EU market. Then prices will go up which will bring US LNG there “in the money”. This explains for me the roots of all problems that Gazprom has been facing at its pipeline routes to the EU. Cut-offs of Gazprom’s supplies to the EU are not its own initiatives – they are results of technical problems and physical limitations (both of demand and access to infrastructure) – artificially created for Gazprom on its routes to the EU by third parties, including its contractual “partners”, in the interests of de-facto US LNG.

On the demand side:

The IEA’s “10 points” plan [1] starts with “no prolongation of Gazprom’s contracts expiring in 2022” (about 15bn m3/yr) and around a 20bn m3/yr increase in LNG imports to the EU in the same year. The REPowerEU plan [2-3] starts with “LNG diversification” equal to 50bn m3/yr before end-2022, aimed at substituting Russian pipeline gas. At least 15bn m3/yr of this volume in 2022, with expected increases going forward, should come from the US according to “Task Force to Reduce Europe’s Dependence on Russian Fossil Fuels,” the US and the EU announced on March 25, 2022 [4]. Current volumes of US LNG imports in the EU have already exceeded this benchmark due to abnormally high gas prices in Europe.

Only six among 54 EU companies who buy Russian pipeline gas have refused to switch to the new payment procedure and thus rejected continuation of supplies, plus three Baltic states earlier refused to buy Russian gas (this amounts to a decline in demand of about 19bn m3/yr in total, on an annualised, not on factual – which is about twice less – basis) [5].

The EU policy of reducing gas demand by 15% from August 2022 until  March 2023 [6], if manageable, should further decrease the Russian volumes from demand side.

On the supply side:

Gazprom faces artificial physical limitations at all its pipeline corridors, except TurkStream, which were all initiated not by Gazprom. (see Figure 2). 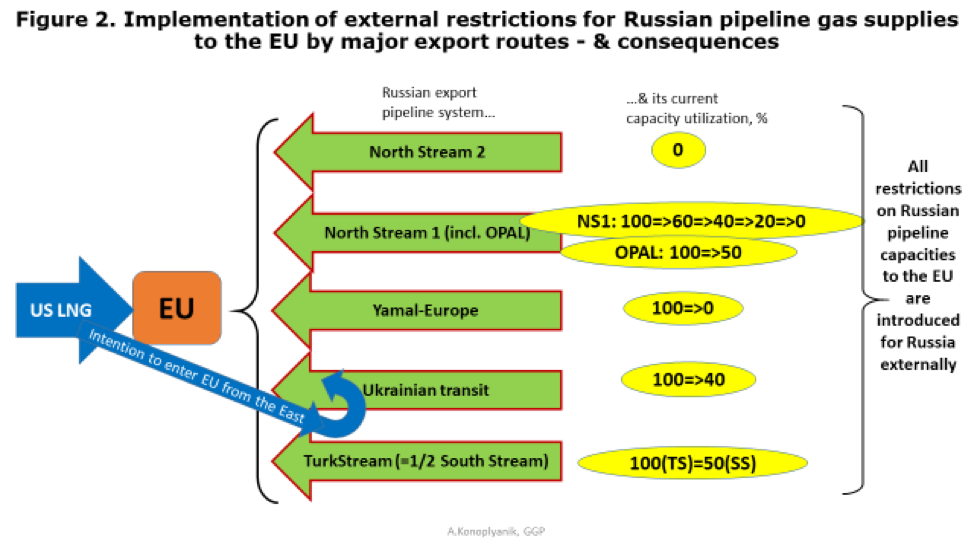 NS2 was not allowed to be put into operation. The decision was formally made by the German regulator, but it was fully in line with and de facto has implemented the US sanctions law CAATSA of 2017, especially its section 232 on “Sanctions with respect to the development of pipelines in the RF'' [7].

The NS1 story, regarding Siemens’s turbines for the Portovaya compressor station (CS) is well-known and was well publicly documented recently by Gazprom. Sanctions implemented by Canada when the first turbine was in repair at the Siemens plant in that country prevented its timely return to Russia. This has stipulated negative “domino effects” which, on the one hand, blocked regular on-schedule repair of other turbines at the Portovaya station. So operation of these turbines was to be stopped for safety reasons because their inter-repair period was over. On the other hand, technical problems with other turbines were identified in the course of regular maintenance, raising concerns about their future safe operation and the risk of accidents. So their operation was halted by the technical supervision authority. This has step-by-step reduced NS1’s gas flow first to 60%, then to 40, then 20% and finally to zero. Plus there is the well-known and long-lasting story with retroactive regulatory EU 50% limitations for OPAL deliveries.

Yamal-Europe (33bn m3/yr) was stopped as a result of counter-sanctions implemented on May 11 by the Russian government to “unfriendly” states and in response to Polish sanctions on Gazprom introduced on April 26. Poland denied Gazprom its shareholder rights at the EuRoPol GAZ company which owns the Polish segment of the pipeline.

Ukrainian transit (40bn m3/yr through 2024) is limited to 40% of the contractual volumes since May 12. Ukraine has been refusing to accept Gazprom’s requests for transit capacity at the entry point Sokhranovka. So transit since then has been flowing only through Ukrainian entry point Sudzha.

So it is only TurkStream that is currently operating at full capacity. But one should remember that this is only half of the capacity of the South Stream (63bn m3/yr), which was initially intended to be built as a southern semi-ring. Its construction was blocked, firstly, as a result of Russia-EU disagreements on its regulatory regime within the EU. Secondly and maybe more/most importantly, it was obstructed due to strong opposition to it from the US, pushed forward through southeast European countries, namely and firstly through Bulgaria (the final barrier from the latter was voiced immediately after the visit of high-level US delegation in 2014 to Bulgaria headed by late Senator McCain, 2008 US Presidential candidate, arguing against SouthStream construction which should have entered the EU onshore in this country).

US LNG to EU: why not from the west?

To substitute Russian gas in the EU, regasified LNG should have to go from the coastline (entry areas 1-5 at Figure 3) to the European mid-continent, where delivery points of Russian gas are located, through the “west-east”, “north-south” or “south-east” pipeline infrastructure. But such infrastructure mostly does not exist (red arrows at Figure 3). According to the Quo Vadis “intellectual exercise” of the Commission as of 2017-2018 [8], available pipeline capacity to bring regasified LNG from the coast of the EU to the middle of the continent is equal only to 22% of capacity of EU LNG terminals. 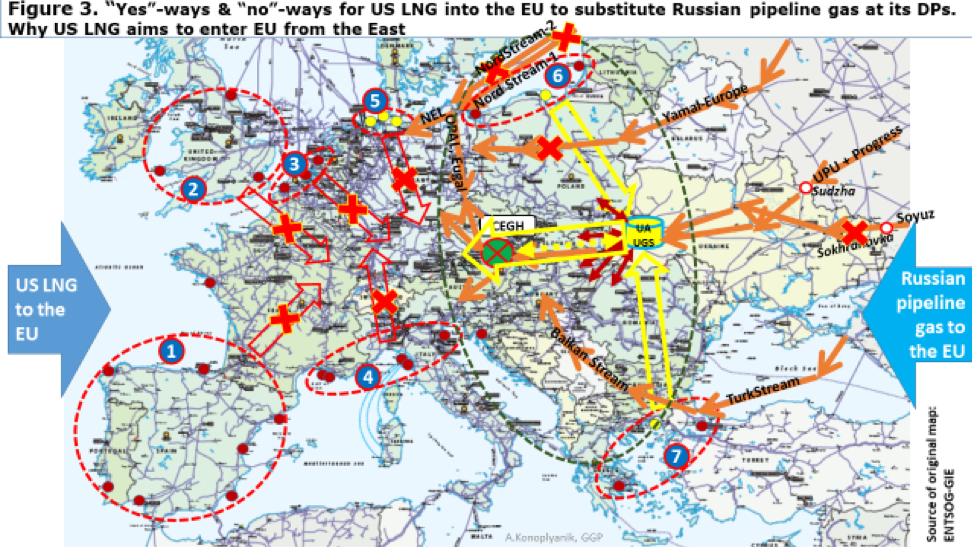 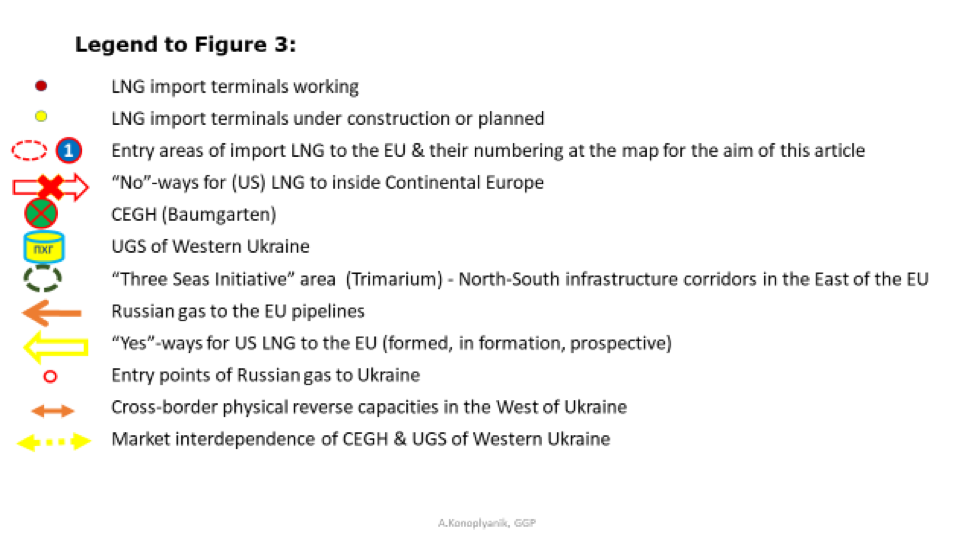 So US LNG aims to enter EU from the east, through east Europe, via existing and to be developed LNG regasification terminals on the Baltic Sea (Swinoujscie and Gdansk in Poland, Klaipeda in Lithuania), the Aegean Sea (Revithoussa and Alexandroupolisi in Greece), the Marmara Sea (Marmara in Turkey) and the Adriatic Sea (Krk in Croatia). Their total annual capacity is about 25-30bn m3/yr. Then regasified LNG would go to the south and to the north in direction to UGS of West Ukraine (total capacity of five UGS there is about 25bn m3/yr) (yellow arrows at Figure 3).

This philosophy has been supported by Ukraine and is well illustrated by the chart from the presentation of Sergey Makogon (CEO of Gas TSO of Ukraine) [9]. Since 2017, the Ukrainian UGS operates in the legal regime of “customs warehouse”, whereby physical reverse flows capacities are established at the west borders of Ukraine. This enables the west Ukrainian UGS to influence the state of the market in Baumgarten, at the CEGH (Central European Gas Hub). It is vitally important for regasified US LNG to receive access to the UGS of west Ukraine since this will help to compensate for the discrete character of LNG deliveries.

And here is the most important point: if/when regasified US LNG (through yet to be fully developed north-south “vertical” pipeline corridor within east Europe) reaches the Ukrainian gas transit “horizontal” corridor, it should be flowed through this horizontal corridor and can use its available capacities in the west-bound direction from the west Ukrainian UGS (Figure 2) by using the MTPA (mandatory third party access) and UIOLI (use it or lose it) legal principles of the Third EU Energy Package. Such tie-in has already occurred recently with the end of construction of the Polish-Slovak interconnector (opened at the end of August 2022), which enters the Slovak system at the Velke Kapushany dispatch point for Ukrainian transit route for Russian gas to the EU.

This is the plan for US LNG, as I can see it.

The institutional instrument for development of the North-South gas infrastructure corridor in east Europe is the “Three Seas Initiative,” established in 2016 by 12 East European states by the initiative of the US Atlantic Council and with strong further ongoing support of the US. The Ukrainian UGS is vitally needed for “Three Seas” since any gas infrastructure corridor without UGS as a compensatory mechanism for gas flows has little value.

This “Three Seas Initiative” is de-facto a successor of the similar plan of “Intermarium,” the concept of which was developed a century ago by Pilsudski. Now it is adapted to gas. But with the same aim well explained by George Friedman from Stratfor that the final aim of the US consists in creating this same “Intermarium” – territory between Baltic and Black Seas. The first aim for the US is not to allow German capital and German technologies to be united with Russian natural resources and labour resources in an invincible combination. The US has been working on breaking up this combination by establishing a dividing line between the Baltic states and the Black Sea [10].

So the real aim of the US is to weaken Europe in global competition in favour of its close political ally – the US itself.

Energy cooperation between Russia and the EU with its cheaper energy supplies compared to alternative options has been beneficial for the EU since it has led to an increase of welfare for EU citizens. So it is good to consider once again – which cooperation is for the real benefit of the EU.

Europe for LNG (including US LNG) is a bridge market within global “price arbitrage” deals (see figure 1). But it is a target market for US LNG in east Europe. The aim is two-fold – “to kill two competitors”:

Nothing personal. Only business. America first.

[2]COMMUNICATION FROM THE COMMISSION TO THE EUROPEAN PARLIAMENT, THE EUROPEAN COUNCIL, THE COUNCIL, THE EUROPEAN ECONOMIC AND SOCIAL COMMITTEE AND THE COMMITTEE OF THE REGIONS. REPowerEU: Joint European Action for more affordable, secure and sustainable energy. // Strasbourg, 8.3.2022, COM(2022) 108 final (URL:https://eur-lex.europa.eu/resource.html?uri=cellar:71767319-9f0a-11ec-83e1-01aa75ed71a1.0001.02/DOC_1&format=PDF).

Member of Research Council on System Research in Energy, Russian Academy of Sciences,

The article represents personal views of the author and is his personal responsibility.