While some US cities have forsworn new household gas connections, industry is seizing the advantages it offers. A combination of its abundance at a low price and rising environmental targets is encouraging some companies to explore new ways of harnessing natural gas.

In December, news of two such new ventures emerged – a gas-to-gasoline study announced by Primus Green Energy; and a waste-to-energy project being jointly developed by Dominion Energy and Vanguard Renewables. More innovative projects seem likely to follow, given that the focus on emissions reduction is only likely to increase, while natural gas prices show no sign of rising.

Indeed, in the Permian Basin – the second-largest gas-producing shale region in the US, responsible for an increasingly large share of national output – forward gas prices are sinking to new lows this month. Spot prices, meanwhile, have regularly dipped into negative territory over the past year, resulting in some oil producers having to flare higher volumes or pay to have their associated gas production taken away.

It is against the backdrop of these Permian trends that Primus is proposing its gas-to-gasoline project, which would be the first of its kind in Texas. The company specialises in the small-scale conversion of natural gas to methanol or gasoline, and has produced both at its demonstration plant in New Jersey. Primus announced on December 11 that, alongside a global petrochemical company as a joint venture partner, it had commissioned a front-end engineering and design (Feed) study with IHI E&C International Corp.

The planned facility would be a scaled-up version of Primus’ New Jersey plant, underpinned by the company’s STG+ technology. The study is due to be wrapped up by the middle of 2020. The Texas plant would initially consume 28mn ft³/day of natural gas and would produce 2,800 barrels/day of gasoline. A second train, doubling output to 5,600 b/d, is also under consideration.

Primus’ did not respond to NGW’s queries, but comments made in the company’s statement by its CEO, Steven Murray, illustrate how the development is being spurred by concern over the rise of Permian flaring.

“As more and more companies focus on climate change and ESG [environmental, social and governance] in general we feel the time to apply this technology has never been better,” Murray said. “Primus’ strategy is to build practical environmental solutions for natural gas that is currently being flared or otherwise wasted. This project enables us to commercially demonstrate our technology, while opening the door for a range of future projects that support sustainability and zero routine flaring initiatives.” 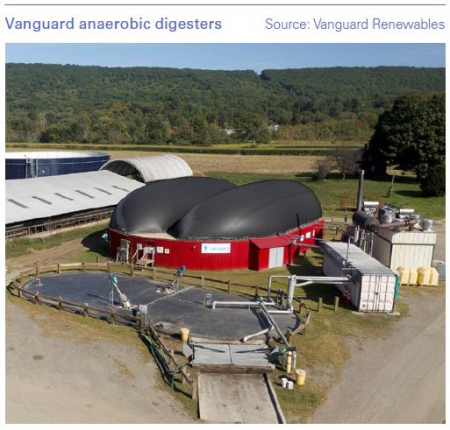 The venture comes at a time when gas-to-liquids (GTL) technology has largely fallen out of favour, for both economic and environmental reasons. Primus, however, maintains that – in contrast to larger projects – its modular gasoline units are designed to be cost-effective at capacity as low as 500 b/d. If the company’s expectations play out, the development could help a region that continues to struggle with its glut of associated gas production. Contractor IHI E&C CEO Chris Celano described the venture as a “much-needed innovation to the gas value chain.”

Dominion and Vanguard’s project, meanwhile, demonstrates how natural gas innovations are spilling over into other sectors – in this instance agriculture.

On the same day as Primus’ announcement, the two companies announced that their partnership, worth over $200mn, would convert methane from US dairy farms into renewable natural gas (RNG). The gas would be marketed by Dominion – which provides both power generation and gas transmission, storage and distribution – for the purposes of home heating, powering businesses and fuelling vehicles. 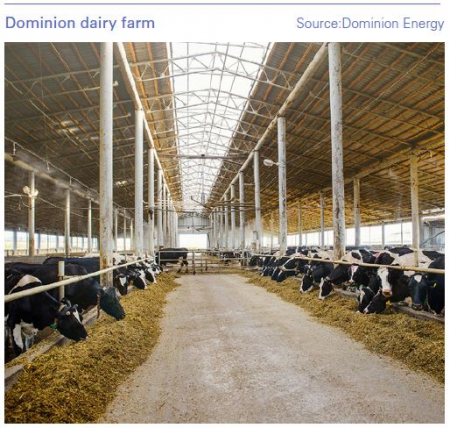 “Dominion Energy is taking a comprehensive approach to clean energy and greenhouse gas [GHG] reduction, and our waste-to-energy projects are an important piece,” a Dominion spokeswoman, Ann Nallo, told NGW. “We’re shifting from coal to cleaner natural gas and expanding renewables at a rapid pace to lower carbon emissions from our electric fleet. And we’re also partnering with other industries like transportation and agriculture to help lower their emissions as well.”

This is not the first partnership of this kind for Dominion, which joined forces with Smithfield Foods – a leading pork processor – in late 2018 on the Align RNG joint venture to capture methane emissions from hog farms.

“As global leaders in the agriculture and energy industries, our companies have the resources, expertise, and market access to expand this proven technology on a large scale over the next decade,” Nallo said of Align RNG. “Together, we recently doubled our investment in Align RNG to $500mn, which will allow us to produce enough RNG to power more than 70,000 homes and businesses by 2029,” she added.

“For our partnership with Vanguard Renewables, they figured out the technology for dairy waste and formed the alliance with Dairy Farmers of America,” Nallo continued. “They are the national leader in the development of food and dairy waste-to-energy projects. We bring capital and gas marketing expertise to the table.”

“Over the six years we have massively upgraded our ability to handle different and varying feedstocks for maximum gas production of RNG with the introduction of sensors, testing protocols and equipment design,” Vanguard’s chairman and CEO, John Hanselman, told NGW. “We recently added manure-only anaerobic digestion to our offering through Vanguard Renewables Ag and in partnership with Dominion Energy. This process is slightly different but the basic premise is the same,” he said.

“The process requires the manure to be sequestered in an enormous oxygen deprived vessel for 15-30 days where the resident microorganisms consume the manure and emit methane,” Vanguard Renewables Ag’s CEO, Kevin Chase, told NGW. “The methane is collected, dried, and purified to pipeline quality standards and then injected into the local distribution or transmittal lines.”

Nallo added that carbon dioxide (CO2) is removed from the produced gas to make it more than 99% pure methane, “which is indistinguishable from traditional natural gas”. According to Nallo, RNG captures 25 times more GHGs than it emits, making it “highly beneficial to the environment”.

The partners are developing projects in Georgia, Nevada, Colorado, New Mexico and Utah, with plans to roll out additional projects nationwide. They predict that their joint venture will reduce CO2 equivalent emissions by more than 450,000 metric tons/year.

“We believe that RNG production from organic materials will be prevalent in every state in the union in the next decade,” Chase said. Vanguard’s joint venture with Dominion is an exclusive partnership for manure-only RNG production. Separately, Vanguard is also working with other utilities including Vermont Gas Services on RNG derived from food waste. It continues to seek opportunities to partner in other areas of the US, Chase added.

For Dominion, its RNG venture comes as it works to reduce carbon emissions on its system by at least 80% by 2050 and methane emissions by at least 55% by 2030. The company expects to see improvements in the efficiency and scalability of RNG projects over time.

Environmental groups continue to take a harder line on phasing out natural gas output altogether, but both Dominion and Primus’ projects involve gas as a by-product of other processes, displacing conventional fuels. Efforts to capture and use this gas are in their early days, but if they succeed in being rolled out more widely they could be welcomed as a step in the right direction.