Shell Platforms to be Hit by Strike: Update

(Adds Wood Group statement in final paragraph)
Almost 400 members of Unite and RMT unions working for Wood Group across eight Shell oil and gas platforms in the North Sea will be striking for the first time in a generation in a dispute over 30% pay cuts and changes to allowances, Unite said July 18. The first 24-hour stoppage will take place July 26, followed by a series of other stoppages over the following weeks, it said.
This follows a massive 99.1% of Unite's members who voted for strike action and 98.5% of members of RMT. It is anticipated that the action will severely disrupt operations on the Shell platforms based in the North Sea’s Brent and Central oil and gas fields. The platforms in question are Gannet, Curlew, Shearwater, Nelson; and Brent Alpha, Bravo, Charlie and Delta. 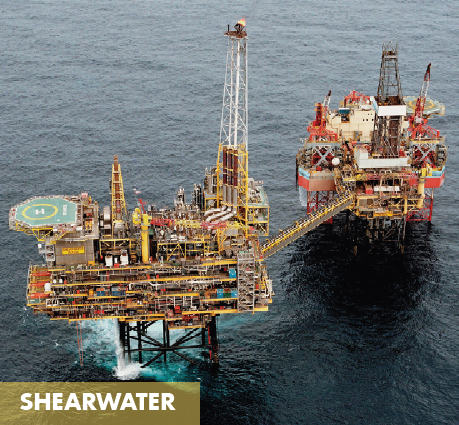 Shell's North Sea Shearwater platform (Photo credit: Shell UK)
The pay cuts have been accompanied by changes to working hours, with a shift from a two-week working cycle to a three-week working cycle which means working extra weeks offshore for the same salary.
Unite regional officer John Boland said: “Strike action by our members is not a decision they take lightly, but they have been pushed to the limit by an employer unwilling to rethink proposals to slash their pay and allowances. This is the third series of redundancies, and cuts to our members' wages and terms and conditions in the last two years. Our members have already made sacrifices and are experiencing the effects of the imposition of a three week working cycle which means more time offshore and less time with their families, for the same salary."
Wood Group said in a statement its employees’ safety and welfare were its priority and it respected their right to take industrial action, disappointed though it was. “We continue to engage proactively and openly with our employees and the unions with a focus on reaching a resolution. Safeguarding these jobs in the North Sea now and in the future has always been, and remains our priority,"
William Powell