Three and a half years after its stock market listing, the major German utility Uniper has become a subsidiary of the Finnish government-owned utility Fortum. But it will have full freedom until the new owner exercises its rights to buy out the other shareholders.

The original Uniper management team had vigorously resisted Fortum’s attempts to secure a majority stake – it had been a minority shareholder from the outset, becoming an investor in principle before E.ON spun Uniper off – but this was not sustainable in the long term.

The share deal was done, bar the regulatory approval process, last October, with the purchase of about 20.5% of the shares from Elliot Management Corp and Knight Vinke Energy Advisors. Fortum said the purchase price, amounting up to a maximum of €2.6bn ($2.8bn) for the overall transactions, was fully financed through existing cash resources and committed credit facilities.

Fortum now has 69.6%. The final tranche, from the same sellers, will be much smaller, between 1% and 3.8% and will be closed by late May. By that point Fortum will have paid a maximum of €6.5bn.

Fortum has said it does not intend to buy out the remaining shares until the end of 2021. In the meantime, while it will be represented on the supervisory board and receive dividends, the two companies will have separate profit and loss accounts. Uniper will retain its independence, under German corporate law, while appearing on Fortum’s annual accounts and paying a dividend. 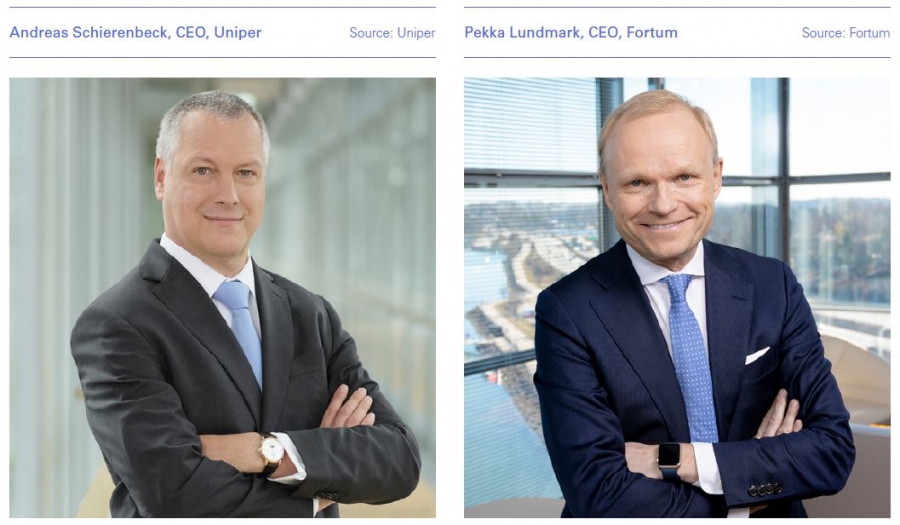 “Today represents an important milestone on our path to build a leading energy group and a true European champion,” said CEO Pekka Lundmark March 26. “By aligning our strategies, we will be able to take a leading role in the European energy transition and create value for all stakeholders.”

But much work will have to be done, he said. “To drive the energy transition forward, carbon emissions from power generation must be reduced and significant investments must be made not only in renewables but also in increasingly clean gas, energy storage, and other flexibility solutions that provide security of supply in the next decades.”

Once completed, Fortum will retain substantial undrawn committed credit facilities of about €4.5bn, with medium-term maturities in 2022-23 (including extension options), in addition to existing cash reserves of about €2.5bn.

Shortly before the closure on March 26, Fortum had already bolstered its account by selling district heating assets in Joensuu, Finland, for €530mn and securing capital release proceeds of €250mn through the introduction of a new owner into its Nordic wind portfolio. Its other district heating businesses in Poland and the Baltic states may go the way of Joensuu.

Uniper had recognised the need for change long before Fortum took control, with investments in hydrogen technology and so on. But it was not until the eve of the closure that it unveiled its plan to be a net-zero carbon emitter by 2035.

This will require a “fundamental strategic reorientation,” it said. At the moment it is emits 22mn metric tons/yr of carbon dioxide but in January it announced its timetable for exiting all coal-fired plant except for one, Dutteln, which is about to come on line (see below).

Unveiling the new green strategy, Schierenbeck said that the company would help its customers decarbonise.

Between now and 2022, Uniper will invest more than €1.2bn in projects that accelerate the transition to a lower-carbon energy world. And new investment criteria stipulate that all future investment projects must not only make business sense but also contribute to the achievement of the company’s decarbonisation targets.

Long-term power purchase agreements for wind and solar power and its own hydro capacity will be part of its decarbonisation efforts, but gas will be the key focus of its future energy strategy, owing to the energy security it represents, which means pipeline gas and LNG.

It is converting or building gas-based power generation systems both at its own facilities and its customers’, for example in Gelsenkirchen-Scholven.

But that is not a simple process as the German power market does not encourage investment in gas-fired capacity, despite the legislated closure of nuclear in the coming years and coal plants by 2038.

Lobby group Zukunft Erdgas said that security of supply had to have a value, if the additional gas power plants required were to be grid-ready by 2030. The measures that make the most sense, so that the electricity market can ensure security of peak supply in good time, must be clarified quickly, it said, commenting on a report by research group EWI.

Uniper plans to gradually replace conventional gas with green gas or green hydrogen in both energy generation and energy trading. It has already made a start in this direction. When it was still part of E.ON, it installed its first power-to-gas unit in Falkenhagen in 2013, followed by another in 2015 in Hamburg. The company supplemented Falkenhagen with methanisation equipment in 2018.

In addition, Uniper has partners in the refining and automobile industries with which it conducts a variety of cross-sector, industrial-scale, real-world-laboratory projects to enable the swift introduction of hydrogen production under market conditions. “The technologies are out there; what has been lacking is profitability and the right regulatory environment,” it said. “Technology neutrality and a holistic, pan-European approach will be necessary to foster the development of a hydrogen industry that can prosper and remain in Europe.”

Showing general support for its new subsidiary Fortum commented that Uniper’s green growth plan "provides a good starting point” for their strategic alignment as one company.

But Uniper’s Russian business, Unipro, which includes 11 GW of coal, lignite and gas power generating capacity, needed decarbonising, it said. Unipro's biggest plant is the 5.7-GW gas fired Surgut plant; the second biggest is the 2.4-GW lignite plant at Berezovsky; the other plants can run on either coal or gas. Fortum conceded that given the situation in Russia – where it operates green power projects – this might take a bit of time to achieve.

Uniper is to close 2.9 GW of hard coal-fired generating capacity by no later than 2025, and just over half will come from three units at the Scholven plant in Gelsenkirchen and the Wilhelmshaven plant, by end 2022. Another 1.4 GW will go at Staudinger and Heyden power stations by 2025 at the latest. It said it is planning new capacity to replace them, including modern, combined heat and power plants fired by gas and producing industrial and district heating and electricity.

Its one lignite fired power plant in east Germany will run until 2034 – according to the federal government's exit plan.

Uniper’s very high efficiency Irsching 4 and 5 gas plants are operated within the framework of the so-called grid reserve regulation. They are only used when their power is needed to stabilise the grid, which has been only very rarely. Whether they can operate in the market again will depend on the market situation, the company said.