The urgency of supporting UK upstream oil and gas to keep energy flows secure into the next decade has been backed by Whitehall. That was a key takeaway from the publication of the UK’s updated energy security outlook last week. The British Energy Security Strategy took a holistic approach to blanket almost all areas of the energy transition with pledges of support and investment. Support stretched from the announcement of new oil and gas licences to be awarded in autumn, which could help stabilise the nation’s supply of low-emission natural gas through to 2030, to research funding to double UK access to low-carbon hydrogen fuels, and a remit for eight new nuclear reactions to deliver additional baseload power. 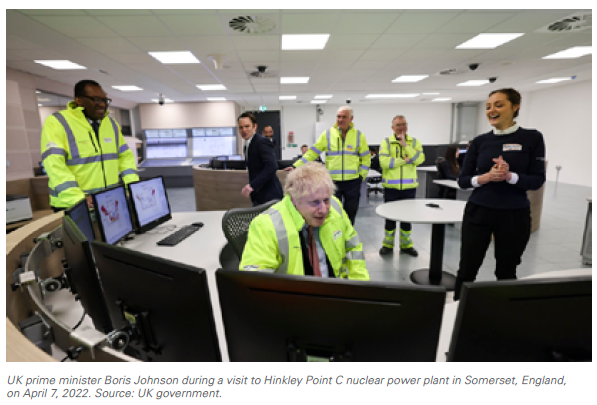 The UK’s department for business, energy and industrial strategy (BEIS) tells NGW domestic oil and gas production is clearly needed in the near term.  DNV GL forecasts indicate the UK will still have to meet significant demand for oil and gas for several decades. Even once net zero is achieved in 2050, gas will account for 21% of the energy mix while oil will represent 29% of cumulative demand. Domestic output produces significantly fewer carbon emissions than LNG imports, according to official estimates.

At a time of soaring gas prices that would offer returns on upstream investment, the UK has the opportunity to maintain hydrocarbon output at around 1.6mn boe/d by 2030, down from around 1.7mn boe/d in 2020, according to forecasts from Wood Mackenzie and data from BP’s Statistical Review of World Energy. However WoodMac said yields could fall as low as 600,000 boe/d at the end of this decade unless upstream investor interest can be catalysed.

The BEIS department said: “We are backing North Sea oil and gas production to ensure greater supply during this transition. Last week we set out our Energy Security strategy, which includes accelerating the deployment of wind, new nuclear, solar and hydrogen, while supporting the production of domestic oil and gas in the nearer-term.”

UK Conservative party strategists would argue the energy security paper managed to deliver the best of both worlds and strike a balance that is desperately needed following Moscow’s actions in Ukraine. The emphasis has been to combine the UK’s traditional energy sector strengths, including North Sea production, with technologies that will minimise disruption as its net zero deadline draws closer.

Aside from nuclear, blue hydrogen was namechecked. Whitehall has no qualms about supporting the hydrocarbon-derived form of hydrogen, unlike peers in Germany which have ruled out clean energy funding for blue hydrogen projects. The HyNet North West hydrogen pipeline will launch in 2025 at the earliest, becoming the country’s first 100% hydrogen route from the domestic Stanlow production facility. By 2050, the facility would serve local demand for hydrogen pegged at 135TWh/yr and national consumption of 550TWh/yr, according to forecasts from the project’s developers. By leaving the door open to blue hydrogen, there will be less need to import from larger producers such as Norway while green hydrogen catalysers are developed, again reducing emissions associated with fuel transit.

Whitehall also underscored its renewables commitments with a slate of ambitious targets, lending a counterweight to its backing for continued fossil fuel extraction.

A pledge to create 30,000 more offshore wind jobs than previously anticipated, en route to delivering 50,000 MW of wind capacity by 2030, along with planning reforms to expedite wind farm approval times to under a year were clearly designed to quell concerns the UK would risk missing its carbon neutrality targets. More grant funding for home solar installations, and heat pumps that use mechanical thermal energy, served similar ends on the demand side.

Whitehall says the upshot of its promises will be that consumers receive reduced energy bills than would have done otherwise, right up until 2030. But much will depend on how the strategy is delivered.

For the UK’s governing Conservative Party, the challenge has been charting a middle course through the energy transition. The oil and gas sector was promised a “fully transformational” state deal in the last Tory general election manifesto in 2019, which saw it returned with a handsome majority against the most radically left opposition for decades.  Yet the UK’s new licensing round for North Sea oil and gas projects this autumn will mark the first time in three years its geological books have been opened to bidders. 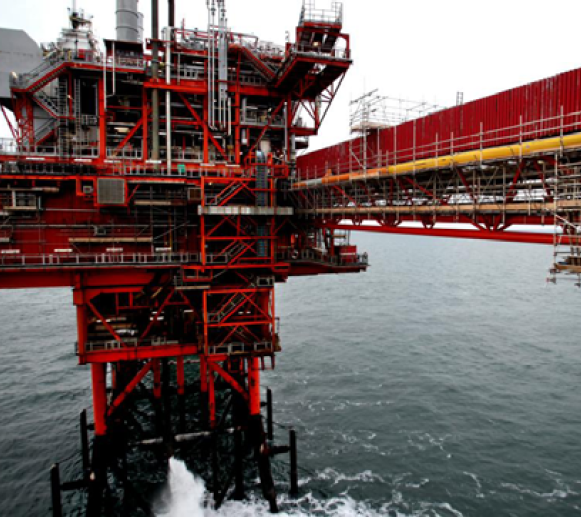 Though the reception to the government’s security paper was tentative in some respects, Whitehall will be heartened by the positive response to its fundamental vision. Ben van den Beurden, CEO of UK-headquartered Shell, led a chorus of industry proponents terming the strategy a “once-in-a-generation” chance for an orderly energy transition.  Speaking for UK businesses, CBI’s chief economist Rain Newton-Smith said the strategy had set an “ambitious bar” for a resilient, low carbon energy system, but cautioned the government must now catalyse its objectives. Ineos on April 11 proposed a new shale gas pilot to help build new scientific evidence, potentially laying the stage for an English fracture drilling revival.

Shale’s role in the English energy mix remains controversial.  A drilling moratorium was introduced by the Tories prior to the 2019 election, after a moderate seismic event caused by Cuadrilla Resources’ pilot project in Lancashire. While Whitehall’s official position has not changed, regulators recently overturned an order to seal Cuadrilla’s two production wells with cement. The BGS study will report back in June with a fresh perspective on English deep shale safety and efficacy, including whether a better prospect than Lancashire exists elsewhere in England.

As Newton-Smith pointed out, the vision set out by the Energy Security paper was only the starting point. Thanks to its indigenous gas resources, the UK has been a net energy exporter for many years but the vitality of its maturing continental shelf must now be guaranteed with end-to-end support, given decreased spending following the price collapse of 2014.

The UK’s dire gas storage position has been one of the biggest legacies of stagnant investment, and the need to significantly boost the emergency reserve has been underscored by Moscow ripping up the European energy consensus. As the EU aims to ramp up storage to 80% capacity by November 1, the UK has been left with just 1.9 TWh in its national reserve, following the closure of Centrica’s 100bn-ft3 capacity reserve at the Rough production complex in Yorkshire in 2017. 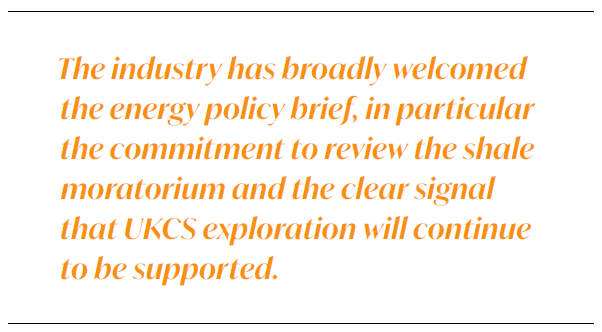 The issue at Rough was that its end-of-life infrastructure for injection and storage were increasingly dilapidated. But Whitehall has been surprisingly insistent there is no room in its coffers for a replacement. Despite Centrica’s CEO proposing last year that Rough could be revived with £1.6bn ($2.1bn) in state-backed financing facilities, there was no mention of storage whatsoever in Whitehall’s security paper.

Government sources tell NGW the omission was justified given that energy market issues are “not an issue of supply”, but rather caused by higher global wholesale gas prices. They say Rough’s closure saved expenditures that would have been passed on to consumers, and that recent market activity proves domestic gas storage capacity has “little bearing” on gas prices.

A cynic might point out that Russian gas supplies to Europe have remained stable since war in Ukraine broke out in February. Whether Whitehall’s flat dismissal of new gas storage will seem so wise if the Kremlin decides to break a few of its European gas chains is another matter. Knock on shortages from the continent could lead to further price increases in the UK, undermining Conservative policy.

Though as Newton-Smith pointed out more details will be needed on the delivery. Rough was at the end of its useful lifespan but the omission of any gas storage from the strategy paper was something of a surprise given that the UK’s reserves are far lower than elsewhere in western Europe. While Rough’s operator Centrica had sounded positive on the project being revived last year, the quoted price tag of £1.6bn to fund Rough’s renovation may well have been beyond the UK government’s budget. Nevertheless, a strategy on gas storage will be needed if the UK is to prove it is serious about protecting energy security against overseas shocks, as Russia has proven, especially if its upstream sector does not perform as expected. Trade body Offshore Energies UK (OEUK) projects that 80% of UK gas could come from overseas without fresh investment. OEUK’s Ross Dornan said gas imports from Norway already surpassed domestic production, marking a milestone for the maturity of the basin.  He told UK broadcaster STV “what it means is our largest gas source is not controlled by the UK and we are as reliant on the performance of Norwegian infrastructure and fields as we are on our own fields. We need to unlock new investment in our gas resources to try and tip that balance again.”

The  industry has broadly welcomed the energy policy brief, in particular the commitment to review the shale moratorium and the clear signal that UKCS exploration will continue to be supported. The government’s pledge to explore blue hydrogen, derived from fossil fuel gases, as well as the all-renewable green hue distinguishes Whitehall’s transition objectives, and its transparency in this area is to be commended. It struck a balance that was enough to win over critics to the right of the Conservative party, along with NGOs sceptical to renewable energy such as the Net Zero Watch initiative. Net Zero’s North West branch praised the energy security announcement and argued the new tax income raised from UKCS oil and gas fields could be used to fund energy transition infrastructure. While this was a strategy designed to shore up UK energy sector confidence in light of the Ukraine war, it was not a perfect policy announcement. There was scarcely a mention of the Rough gas storage closure and the UK’s depleted emergency reserve, even as the EU has pledged to bring all storages in its borders to 80% capacity before November 1. Nevertheless, in the context of a wide ranging policy initiative that attempted to tick off every energy transition and security objective, the silence on Rough could be accepted as an oversight

While the Conservatives also promised to” lead”  on climate change by sticking to the UN’s 2050 carbon neutrality benchmark, energy was a key policy battleground that differentiated Boris Johnson from the Jeremy Corbyn-led Labour platform. The opposition's pledge to levy a new oil and gas windfall tax was perhaps characteristic of its economic illiteracy. At the time of the last general election, the oil and gas industry employed almost 300,000 people in the UK, with 40% of those based in Scotland.