Ukraine has offered dozens of production-sharing contracts (PSCs) and concessions to investors over the past year, under an ambitious push to become self-sufficient in gas. In its latest tender, authorities are now seeking bids for three more PSCs covering almost 3,600 km2 of the Dnipro-Donets basin in eastern Ukraine, which hosts many of the country’s largest gas fields.

Opimakh hosted an event in London on December 11 showcasing the new contracts. The deadline for bids was originally last November but was delayed until February 4, 2020 to give investors time to study the assets, he said.

The new blocks up for grabs – Ichnyanska, Okhtyrska and Grunivska – are in areas with well-developed infrastructure including pipelines, according to Opimakh, reducing potential development costs further down the line. The areas were first explored in the early 1970s, and since then some 88 wells have been drilled and 2D seismic collected. They host a number of possible oil and gas structures, but no proven reserves.

“This is why the initial commitments are not that high, but there is huge interest in these blocks,” Opimakh said, declining to comment on the types of companies that had expressed interest.

Under the 50-year PSCs, selected operators will be required to invest more than a combined US$70.3mn (UAH 1.63bn) over an initial five-year exploration period. Their obligations include undertaking 3D seismic surveys and drilling at least two or three wells at each block.

If a discovery is developed, the operator will receive up to 70% of production revenues until it has recovered its costs, while the Ukrainian state will take a share of at least 11% of profit oil. A royalty tax rate of 2% on liquids production is charged, and a rate of 1.25% on gas production. PSC holders are also subject to corporate income tax, VAT, personal income tax and unified social contributions (USCs).

While Opimakh is hopeful about the current PSA round, Ukraine’s auctions so far have had mixed success. The first of their kind since Ukraine’s 2014 revolution and subsequent economic crash, they have been hailed for their transparency – something that has hampered previous tenders in the country. But the response from investors has been lukewarm.

A total of 43 blocks have been offered this year, but only 28 attracted bids. And only four were won by international investors, dashing Ukraine’s hopes of securing significant foreign investment.

The first concession round was completed in March, with only three of the ten blocks included receiving interest. The winners were all local: state-owned gas firm UkrGasVydobuvannya (UGV) and two well-established private players, Burisma Group and DTEK, both under the control of Ukrainian oligarchs. On the bright side, the bidding was competitive, driving up the collective price of the concessions to $6mn, or more than three times the initial asking price.

The second contest finished in May played out better, collecting bids for six out of seven concessions. UGV dominated the third round in June, securing all but one, which was won by private firm Yedyna Oil & Gas. UGV went on to secure seven of the concessions in the fourth offering in September, while the remaining two did not fetch any bids. The fifth contest in October saw two of the five blocks awarded: one to Nafta RV, a subsidiary of Czech energy group EPH; and one to Ukraine’s Nadra Carbon.

Ukraine had been banking the offer of nine PSCs in June to rope in foreign investors. All of them were awarded, but six went to UGV and other local companies. UGV won two more jointly with Canada’s Vermillion Energy, while the last one was secured by US player Aspect Energy. Ukrainian authorities had been hoping to see major international oil companies join the bidding war, but this was not the case. Negotiations with the winners are underway and, according to Opimakh, contracts should be finalised in early 2020.

Authorities also held a tender for a PSA for the Dolphin block, covering more than 9,500 km2 of the western part of the Black Sea. The result was far from desirable, with the only offers coming from local firm Ukrnaftoburinnya and two international companies with limited experience: Texas-based Frontera Resources and London-listed Trident Resources. Trident, founded by former Russian opposition politician Ilya Ponomarev, won the contest despite owning no oil and gas assets. The award was overturned by the government, which said it had been counting on the likes of ExxonMobil and Shell to file bids. ExxonMobil has signalled its plans to exit European gas, but Shell has in the past talked up the country’s very sizeable shale resources.

Opimakh believes the auction at Dolphin failed because investors were not given enough time to size up the asset. At the time he was serving as the head of the Association of Gas Producers of Ukraine (AGPU), a lobby group set up in 2015 for the gas industry. Now at the geological service, he may be in a position to improve things.

“Why did the Dolphin auction fail? We should have had six months to prepare, held roadshows,” he said, adding that the contest would likely be restaged in March. “If Trident wins this time as well, let it be.”

Opimakh wants to see Ukraine have an “open door policy” to investors, removing all unnecessary barriers. As part of this effort, foreign companies no longer need to register Ukrainian subsidiaries to bid for projects, participating directly instead, And physical data rooms have also been set up, enabling increased access to information on blocks.

He said the country’s gas industry was set for an “even more exciting” year, with a further 23 PSCs and concessions covering 25,000 km2 due to be offered up in 2020. These are greenfield sites, he said, but some exploration has taken place.

Ukraine’s ultimate aim is to produce more gas than it consumes. 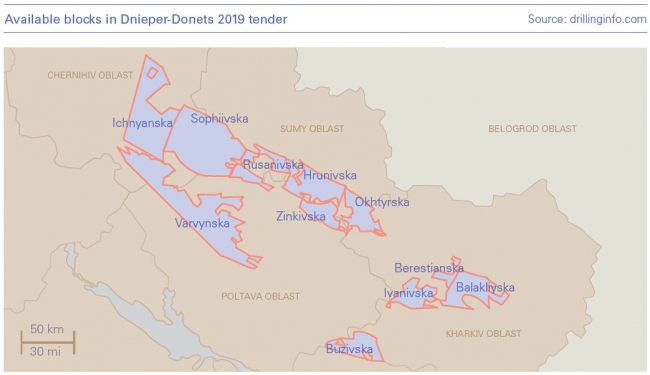 The government announced plans in 2016 to lift output to 27bn m3/yr by 2020 – a goal that authorities admitted last year would not be reached. As part of the initiative, UGV, Ukraine’s top gas producer, had set out to produce 20bn m3/yr by next year, but its output only reached 15.5bn m3 in 2018. National production came to 21bn m3 that year, while consumption stood at 30.6bn m3.

Still, Opimakh believes Ukraine could ramp up production by as much as 30bn m3/yr within the next decade, with the right policies and investment climate. Beyond conventional reserves, there is big tight gas potential, he said, with estimates for economically feasible reserves ranging from 1-3 trillion m3.