UK's offshore oil and gas industry has committed to halving its greenhouse gas (GHG) emissions by 2030 and reaching net-zero emissions by 2050. This makes it one of the first industry sectors to set out a timetable, it said in a report published June 16, as it announced talks had begun with government on a sector deal.

The upstream regulator Oil & Gas Authority has also laid emphasis on the net-zero objective and said that unless something were done, the offshore could lose its social licence to operate. It has however welcomed the targets and said it would incorporate them into its data benchmarking.

OGUK published Roadmap 2035, its plan for the offshore energy transition, last September, but since then the Covid-19 pandemic has struck, cutting oil and gas prices to historic lows and so risking tens of thousands of jobs and long-term upstream investment.

However, the UK independent organisation, the Committee for Climate Change, thinks that by 2050, the UK will still need 400mn barrels oil equivalent/yr. OGUK says half of that could be met by its own oil and gas reserves. So there is much to play for: the offshore industry supports 270,000 jobs, brings in £10.6 ($13)bn of supply-chain exports and £1.2bn in production taxes alone, while also playing a key role in UK energy security.

A limited amount of that initial 50% will come from operational improvements early on: the low hanging fruit. This includes replacing valves, re-sizing pumps or reducing spinning reserve on power generation turbines, it said. Another 40% are to go by 2040.

Achieving the whole 100% – the only allowed emissions will be flaring for safety reasons – will require a range of options including carbon offsets and be very capital-intensive, according to OGUK’s report, Pathway to a Net-Zero Basin: Production Emissions Targets.

OGUK CEO Deirdre Michie said that a “transformational sector deal could enable the industry to support a green recovery…. With support from governments and regulators, we can protect domestic energy supplies, jobs and communities whilst embracing the opportunities which will come from being at the forefront of delivering a low carbon economy." 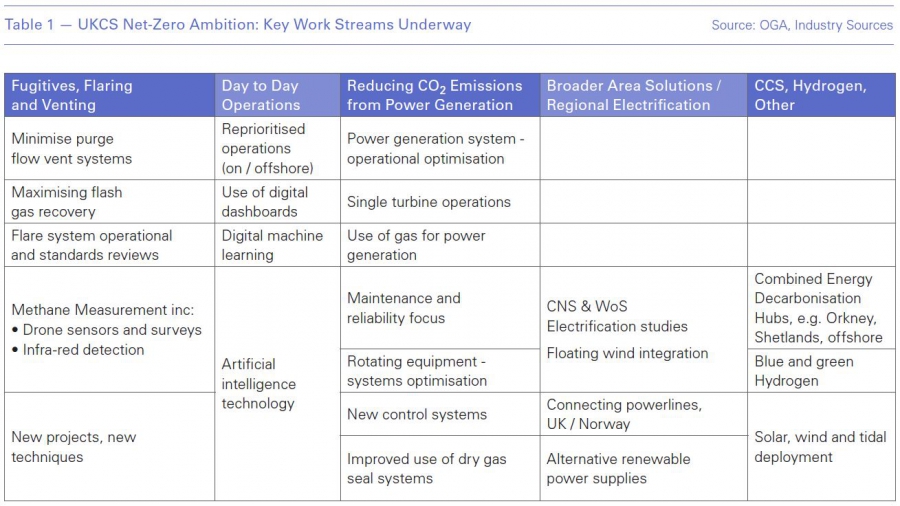 Welcoming the report, UK energy minister Kwasi Kwarteng said he supported a sector that has "a vital role to play in our energy transition in the years to come. The UK government will continue to work tirelessly with all partners to deliver a dynamic sector deal." He did not give any specific commitments as to how the government would support it, and some in the industry see it as only words at the moment.

His Scottish counterpart Paul Wheelhouse said the initiative was timely as it follows the Scottish government’s announcement June 12 announcement of £62mn to support the energy transition. Aberdeen is the logistics capital of the UK oil and gas offshore sector.

Nearly all the GHGs – 91% are CO2 and 8% are methane – come from offshore installations; 15% come from onshore terminals; and 5% from logistics, such as support vessels and helicopter flights. Across the sector, 70% are from power or heat generation, gas compression and so on while 29% were from flares and vents. Achieving these reductions will be supported by improvements in the measurement and monitoring of emissions.

Report author Louise O'Hara Murray said that many of the major capital investment projects needed for decarbonisation, such as offshore wind and carbon capture, use and storage (CCUS) will need to be developed at scale to help other industries accelerate their own efforts to reduce emissions. It will take time to develop a regulatory framework for CCS, and offshore wind might need a separate contractual system for a generation and transmission network to power the platforms.

OGUK told NGW said there would be no trade-off with the other primary objective of maximising the economic recovery of the remaining reserves, despite the extra costs likely to be involved in electrification, for example. This added burden might be expected to push some marginal projects beyond commercial sense (see box, Premier Oil). However the target is not for each asset but the basin as a whole.

OGUK said that a large portion of the decarbonisation effort – at least half and possibly two thirds – will probably come from the decommissioning of existing and old platforms later this decade. However, it said it was difficult to be precise as timings will be influenced by factors such as commodity prices.

Flaring and venting are significant sources of methane emissions for the sector. OGUK is developing a detailed Methane Action Plan for release later in 2020, to promote continuous reduction in methane emissions supported by improvements in quantification.

The report considers likely the development of offshore hubs where a number of interconnected offshore platforms share a centralised renewable power supply. They might produce hydrocarbons or hydrogen and/or storing CO2 in offshore reservoirs and lay the foundations for large scale emissions capture for the wider UK economy.

Step-change actions to reduce emissions could include more use of electrical power, re-sizing to reduce the number of compressor trains and consolidation of processing to increase efficiency by maximising throughput.

Alternative approaches to process heat generation include harnessing waste heat from other processes such as hydrogen production and alternative fuels such as ammonia or hydrogen.