On 3 March 2020, the Hydrogen Taskforce, an industry group formed in the summer of 2019 by Shell, BP, Arup, BOC (Linde Gas), consultancy DBD International and ITM Power and which has since grown to include members such as Storengy (Engie), boiler manufacturer Baxi, gas distributor Cadent, Northern Gas Networks,  BNP Paribas and Arval, presented their first report to a group of key members of the British Parliament and Energy Minister Rt Hon. Kwasi Kwarteng MP.

In it, they ask the government to commit to a national, “cross-departmental”, hydrogen strategy and to provide £1 billion in financial support over a four-year period to support projects in hydrogen production, storage and distribution. According to the Taskforce’s spokesperson from London-based communications agency Madano, which helped found the Taskforce together with policy consultancy Ecuity, the report was very positively received by MPs and Energy Minister Kwarteng.

The spokesperson explained that the industry players decided to create the Taskforce because they feel currently a national strategy is sorely missing in the UK. “We looked at a lot of projects and innovators in the sector and we found was there is a lot happening in hydrogen, but there is a gap when it comes to the creation of a national policy.”

The spokesperson noted that “many different government agencies are involved in various aspects of the hydrogen sector – for example, the Department of Business, Energy and Industrial Strategy (BEIS), the Department for International Trade, the Department for Transport, the Ministry for Housing, the Environment Ministry (DEFRA) and the Treasury – but there is not a cross-sector vision, ranging from energy production to heat and all the way to transport.”

The Taskforce believe that with government commitment, the UK has the potential to become a world leader in hydrogen technologies and production. Unlike for example Germany, which is envisioning huge imports of green hydrogen in the future, from regions like North Africa, Australia and the Middle East, the UK players will focus on indigenous production.  In addition, like the Germans they believe they can become exporters of solutions and technology.

The spokesperson continued: “We asked the government for £1 billion in support to create hydrogen solutions to scale, so that they’re in a position to meet the UK domestic energy needs for a net zero future. We don’t want to spend that on imports. The main thrust of our effort is indigenous production. We may have to import some hydrogen at some point, but that is not what we are hoping for. We want to make UK a hydrogen economy and to export our technology and our hydrogen to other countries as well.”

The Taskforce envisages a future which includes both green hydrogen, produced from natural wind resources (“the largest in the world”) and blue hydrogen, “applying our existing supply of natural gas and CCS. In addition, there is the possibility of producing hydrogen using nuclear energy.”

The UK hydrogen effort differs in yet another aspect from those in most other countries, in that it puts high priority on realising  hydrogen solutions in the home heating market, alongside other technologies (heat pumps) In countries like The Netherlands and Germany, hydrogen for home heating is seen as a more long-term option compared to hydrogen use in industry and transport.

The UK “is considered to be a global leader in the development of hydrogen for heating,” notes the report. The Taskforce calls on the government to “collaborate on public trials in occupied buildings of 100% hydrogen heating” and to mandate that all new boiler installations must be hydrogen-ready from 2025 on. For example, the HyDeploy project is one such venture, aimed at enabling hydrogen blending in the gas network of up to 20% before the end of 2022, and to develop 100% hydrogen solutions already for the period 2022-2027.

“The government has committed to net zero-carbon emissions by 2050,” said the spokesperson. “This will require decarbonising the heating sector. We believe that hydrogen is needed, alongside electrification, for the decarbonisation of heat. The scale of the heat domain coupled with its seasonal demand profile make it a good fit for chemical energy carriers such as hydrogen.”

One important element in the Taskforce’s strategy is to align its projects with the UK government’s policy of “levelling up the regions”, which is currently the main thrust of UK policy in addition to Brexit, said the spokesperson. “We are going to be providing hydrogen projects in areas of the UK that need to be levelled up. The North-West and North-East of England are great places to produce hydrogen or to store it.” 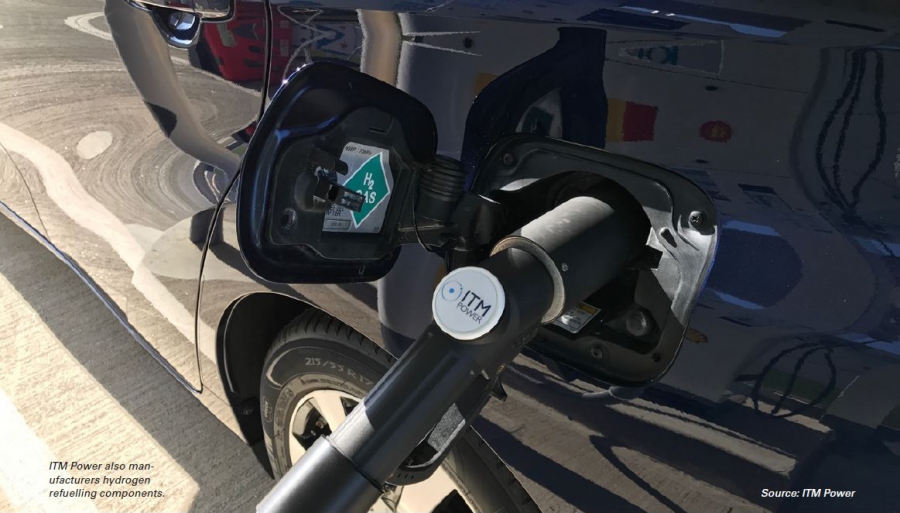 The Hydrogen Taskforce report lists a number of hydrogen programmes that are being carried out in the UK at the moment:

In addition, it lists a number of interesting case studies that are being carried out:

Another major hydrogen initiative in the UK, announced in mid-April, after the report came out, is a plan by the UK’s gas network operators which aims to deliver the world’s first zero-carbon gas grid. This is part of a larger programme, called Gas Goes Green, undertaken by the Energy Networks Association, which includes all major UK gas operators, such as Cadent, Northern Gas Networks and National Grid.

As reported by James Murray on the website Business Green on 16 April, the programme will be spearheaded by former Cadent CEO Chris Train, who is being billed as the UK’s first “Green Gas Champion”. The Gas Goes Green initiative will not only look at converting the gas grid to hydrogen, but also how to accelerate the use of biomethane in the grid.

A study by consultancy Guidehouse (formerly Navigant), Pathways to Net-Zero: Decarbonising the Gas Networks in Great Britain, published in October 2019, concluded that a scenario in which renewable gas was used in combination with low-carbon electricity would save up to £13 billion compared to a 100% electrification scenario.