This year’s Adipec conference in Abu Dhabi saw a slew of agreements with investors such as French Total and Italy’s Eni, on upstream gas development. And more are to come.

They are needed because state oil and gas producer Adnoc, with the blessing of the Supreme Petroleum Council, has put forward a plan to develop more than 1.5bn ft³/d (15.5bn m³/yr) of new gas production by the mid-2020s, followed by a further 1.5bn ft³/d by 2030.

This, the company says, will move the country from net imports to net exports of gas, meaning an addition to global LNG supply.

The renewal of a gas supply contract to the Adnoc LNG plant, also announced at Adipec, will keep production steady until 2040, and further announcements due soon will centre on six oil and gas blocks, opened up for competitive bidding.

The blocks “potentially hold multiple billion barrels of oil and multiple trillion cubic feet of natural gas,” said Adnoc, telling NGW that so far there are no volumetric targets for gas production.

The UAE sits on 5.9 trillion m³ of proved gas reserves, the eighth largest in the world, so its potential emergence as a major LNG exporter has some credence. In practice, however, domestic demand growth is likely to see the country’s gas deficit persist.

The UAE’s electricity demand has risen by 5.6%/yr on average over the last decade. About 98% of the country’s electricity is generated from gas-fired power plant and the electricity sector accounts for about 53% of total gas demand, according to BP data.

Gas for non-power generation purposes has risen by 3.5%/yr on average and can be expected to continue on an upward trend as a result of planned investments in the refining and petrochemicals sectors.

Gas also plays a key role in support of UAE oil production, which last year fell, the first time it had done so since 2008. Gas is used to maintain reservoir pressures and increasingly in enhanced oil recovery programs to support output from maturing fields.

Phase 1 of the planned development involves the Hail, Ghasha and Dalma ‘mega-project’ which taps into Abu Dhabi’s Arab formation. Additional production will come from unconventional gas reserves (1bn ft³/d) and from the Umm Shaif gas cap, amongst other possibilities (0.5bn ft³/d).

Abu Dhabi was the Middle East’s first LNG exporter, completing two LNG trains in 1977. A third was added in 1994, but no further capacity has been added since then.

Instead, to meet rising domestic demand, the UAE turned to Qatari pipeline imports, with the completion of the Dolphin gas pipeline in 2007. It then went on to install its first LNG import terminal in Dubai in 2010 and a second in Abu Dhabi in 2016.

Despite exporting a net 3.34mn metric tons/yr of LNG in 2017, according to Internationa Gas Union data, the UAE had an overall gas deficit of 11.7bn m³, according to BP annual statistical data.

The reason the UAE turned first to Qatar – against which it is now arrayed with other Gulf Cooperation Council states in a blockade – and then to LNG imports was cost. The UAE’s undeveloped gas reserves, while large, contain very high levels of hydrogen sulphide: a highly toxic and corrosive gas.

Even with advances in sour gas technology, all pipes and equipment dealing with the sour gas have to be made from special metal alloys, which cost as much as ten times the price of normal alloys. Special operating procedures are required for all drilling and production operations. The hydrogen sulphide must be stripped from the gas, which means more capital and operational expenditure, and the sulphur by-product has to be disposed of, with little guarantee that it will produce revenue.

Bulk separation processes can be used to sweeten the gas before it enters a traditional sweetening unit. This cuts down on post-sweetening sulphur removal costs and avoids the production of elemental sulphur. The sour acid gas stream from the bulk sweetening process is re-injected into the reservoir or a saline aquifer. The aim would be to use it to support oil production.

This improves the overall economics of a sour gas project but creates a large difference between the volume of initial gas produced and the amount of marketable natural gas, owing to the loss of the acid gas stream. Moreover, while sour gas development can be used to support oil production, whether a pure sour-gas-to-LNG value chain would be competitive is questionable.

The real crunch, however, comes on the demand side. Gas demand in the Middle East has risen fast over the last decade, more quickly in percentage terms than in any other region in the world. The Middle East needs power and lots of it. In addition to normal demand growth as a result of rising populations, the region faces water stress and hot temperatures, creating large loads for air conditioning and desalination.

The region’s refineries also need gas. The UAE’s refinery capacity has risen to 1.147mn b/d from 0.7mn b/d in 2014. Its petrochemicals sector has also expanded rapidly. The Borouge III project came online in 2015 and in May this year Adnoc announced a $45bn investment in what will be the world’s largest integrated refining and petrochemicals plant at Ruwais.

Maximising gas inputs into refineries and petrochemicals plants sustains the volume of oil available for export. Given the planned investments in these areas, gas demand from non-power generation sources is likely to remain on an upward curve. 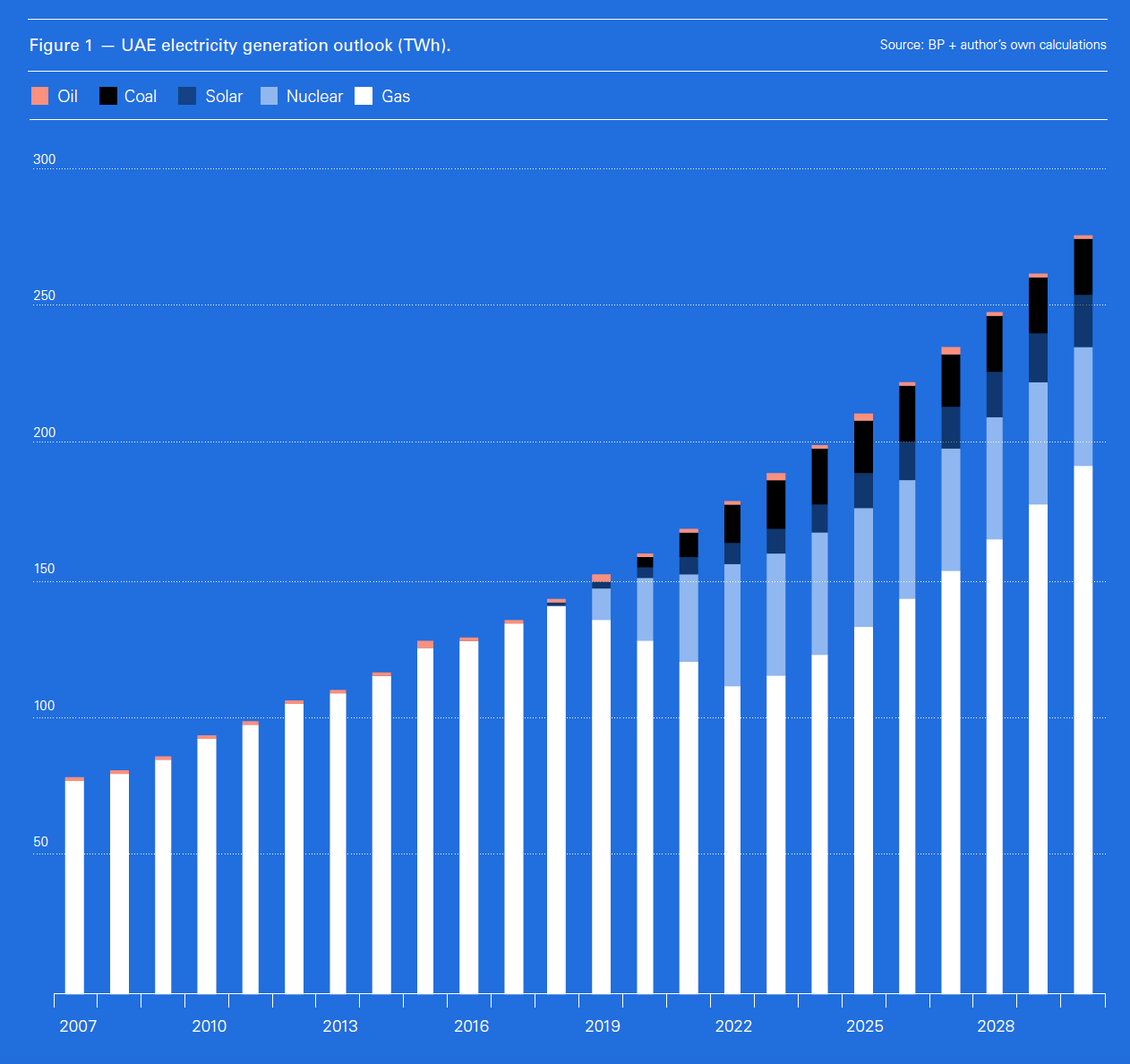 The first of four nuclear reactors built by Korea Electric Power Corporation started loading fuel in May. They should add 5.6 GW of power generation capacity by 2021.

The UAE is also building large amounts of solar power, both photovoltaic and concentrated solar power with storage. It has awarded GW-size tenders in recent years at record low prices. In addition, the UAE is building a 2.4-GW, ultra-supercritical coal plant at Hassyan, which is scheduled to come online in four 600-MW phases from March 2020.

These new energy sources will reduce gas use, but not by enough to offset overall demand growth out to 2030.

However, if the 5.6%/year growth rate in electricity demand is sustained over the next decade, and 1 GW of solar is installed each year, UAE gas for power generation demand would still return to 2017 levels by 2026, despite the addition of the nuclear and coal plants. On top of this needs to be added more gas demand from non-power generation sources.

The new gas expansion plans will see 15.5bn m³/yr new supply by the mid-2020s, followed by a further 15.5bn m³/yr by 2030. Unless the UAE ups its construction of new energy sources beyond current ambitions, its gas balance is likely to stay negative out to 2030 and beyond, undermining its ambitions to become a net gas exporter.