Here is what one needs to consider:

First, the U.S. has become world’s top oil and gas producer and no matter how one looks at it, meaningful growth in U.S. volumes has come from the “unconventional” plays.

U.S. production has enlarged the global pie with commensurate benefits to customers and consumers of all types.  From the advent of shale oil production in 2011, U.S. crude supply has grown 133 percent, with the Permian contributing almost 70 percent of that increase.  For 2017-2018 alone, the U.S. had the world’s largest-ever annual increase in production for both oil and natural gas.  From the 2016 bottom of about 8.8 MMBD through end of 2019, overall U.S. oil production increased 45 percent to roughly 13 MMBD.  Oil and liquids supply from the mighty Permian grew almost 80 percent, from the Denver-Julesburg basin (Niobrara) about 77 percent, from the Bakken more than 50 percent, and from the Oklahoma shale plays (SCOOP, STACK and others) about 38 percent.  The Federal OCS Gulf of Mexico (GOM), which had been edging toward a comeback, grew roughly 13 percent. 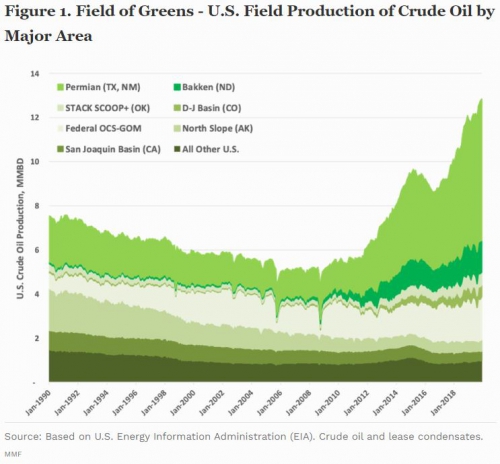 These production gains are representative of a vast, important, but complicated resource base.  Onshore shale plays constitute the source rocks underlying legacy conventional oil and gas fields.  These extremely tight beds yield hydrocarbons only with considerable encouragement.  OCS production is mainly from deep water locations.  In both cases, money, technology and supply chain logistics dominate strategy, planning and execution.  Performances across operators in any one location can vary substantially.

Second, the vibrancy of the U.S. domestic producer population is unique in the world.  Over the years, the industry has recovered from many setbacks to rebuild, tackle new frontiers, survive and thrive.

The U.S. domestic producer base is nothing if not diverse.  While the entire industry has been under scrutiny for better performance, different companies are in very different positions.  That diversity is highlighted in the table below using a sample of 153 public and private companies (out of thousands).  Beyond this group, much of the remainder of U.S. output is mainly in the hands of smaller public companies; a vast group of medium (less than 20 KBOED, or thousand barrels of oil equivalent per day) and smaller private operators; some international companies, including those owned or controlled by their home governments (mainly in the GOM).  The dominant, publicly traded pure shale players are counted in the large and small cap independents.  Small cap public independents in shale plays tend to be gassier, a reflection of emphasis (for instance, Appalachian positions) but also less wherewithal to acquire more expensive, oilier acreage in the hotter plays.  Among private companies – which represent all domains of U.S. oil and gas activity – are several prominent operators in the key shale basins and sub-basins. 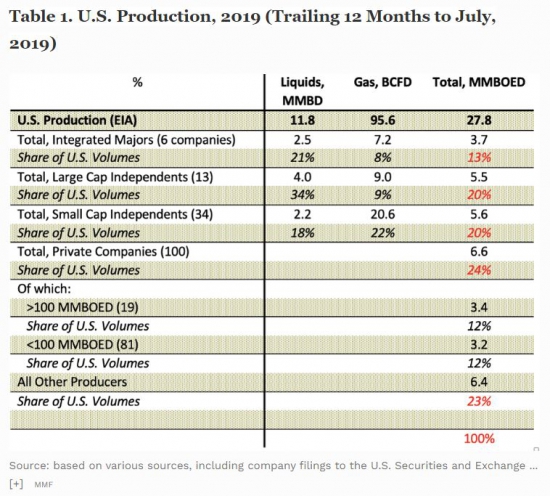 Since 2011, a lively mix of funding has supported the U.S. industry, especially post-2008 recession when higher oil prices provided a haven to less appealing assets.  In particular, private equity was lured to the shale plays and pure players by prospects of generous returns from stock offerings, especially initial public offerings (IPOs) as new companies were created and new plays established.

Third, for some time, investors have preferred the lure of shale development risk to that of conventional exploration risk.

Trading off the risk of exploration dry holes with shale development at large scale may have seemed a good bet but has proved to be easier said than done.  U.S. shale plays were viewed to provide faster returns, largely a consequence of high initial production rates for wells that help speed payback.  Shale plays are complex and expensive.  A high degree of variability exists within basins.  Especially in oilier, premium territory like the Permian, well performance and cost management challenges have been pervasive.  To solve these problems companies engaged in larger commitments of capital expenditure for “superlateral” and “superfrac” drilling and completions in “cube” well designs to achieve larger volumes and reduce unit costs.  Cube costs can range from $150-200 million or more.  Thus, front end capex commitments for large scale “industrialization” can move shale plays into equivalence with offshore deep water locations.  Given the high degree of variability across individual shale wells, expensive large cubes that do not perform as expected can magnify losses.

A typical expectation is a 10 percent return on capital.  Assumptions are that companies can re-invest out of returns net of investor obligations (interest on debt and dividends).  For that to happen, U.S. producers would need a total cost structure (capex plus opex plus total return) that pays back annual capex as well as ongoing, booked finding and development expenses and does not exceed commodity price (left panel in figure below; full cycle through 2018; 2019 costs remained just below the traded light sweet crude, West Texas Intermediate).  Heading into COVID-19 and the Russia-Saudi standoff, improved discipline and improving oil prices were yielding better cash balances after a long drought (right panel in figure below; companies were continuing to be cash flow positive during 2019 quarters). 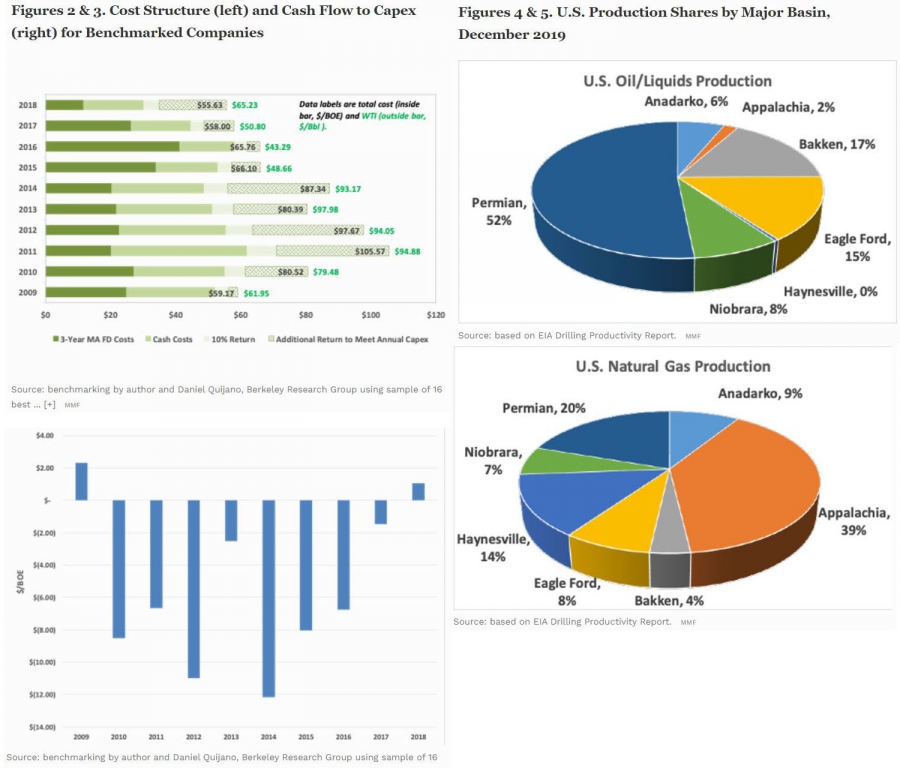 Volumes from larger shale wells, pads and cubes exceed midstream capacity, so that prices paid for production have been heavily discounted to the traded commodity indexes.  This especially has been true for natural gas, particularly Permian associated gas yielding negative prices to many producers.  Hedging can make up some, but not all, of the cash loss.  Underlying cost structure for oily companies (larger and oilier producers tend to have higher cost structures than smaller and gassier ones) highlights the cash generation deficit.

Fourth, any new investment – even drilling to maintain a company’s operations and workforce – hinges on external capital.

Even before the COVID-19 and Russia-Saudi, much less has been available to the industry, given investor discontent with profitability and cash positions.  Unhappiness shows up in S&P industry weightings which, for oil and gas, declined from roughly 12 percent in 2009 post-recession to below 3 percent currently.

In sum, the U.S. oil and gas supply picture exhibits a great deal of vulnerability, arguably much more than it did during precipitous price falls in 2009 or 2014.  In 2018, about 2.5 MMBD of oil and 25 BCFD of natural gas came from low volume wells (50 BOED or less).  These include a growing population of horizontal wells, now about 143,000 of the roughly 990,000 fleet (all based on EIA/Enverus Drillinginfo).  This production could be immediately curtailed as low volume wells that fall below breakeven are plugged and abandoned.  “Pure play” shale producers must drill to maintain operations and retain employees, both of which have been expensive to build and hone.  The bulk of the domestic producer industry has insufficient cash; overall the sector remains out of favor with capital markets.  Larger companies will forgo spending onshore in favor of sustaining GOM assets.  Consolidation could reach into the large cap independents.  Integrated majors face low returns from value chain capacity that has been rapidly built to accommodate large new domestic volumes from shale plays, ambitious oil and liquefied natural gas (LNG) projects.  They also are under pressure to demonstrate competitive performance upstream.

The U.S. has a large, rich resource endowment.  The main questions will revolve around how low for how long, extent of industry adjustment, sustainability of essential oil field services, and timing of recovery for which more attractive prices and improved investor sentiment will be key.

China and the Oil Price War: A Mixed Blessing [GGP]