U.S. LNG: A World Of Benefits Beyond Price

Demand for crude oil and products dropped during the pandemic lockdowns, reflected in those U.S. exports (Figure 1).  By contrast, U.S. exports of LNG were largely sustained and have reached new highs.  U.S. LNG has been relatively cheap, supporting the addition of U.S. sourced natural gas in customer portfolios (Figure 2).  Yet price is not the only motivation.  A recent workshop organized by the Baker Institute’s Center for Energy Studies (CES) with Western States and Tribal Nations (WSTN) focused on the benefits derived from U.S. LNG exports.  We pointed to several tangible benefits of U.S. LNG exports that go far beyond procurement cost.  The need for diverse supplies to counter energy security risk and the desire to use cleaner burning natural gas may well sustain U.S. LNG exports to otherwise price-sensitive customers. 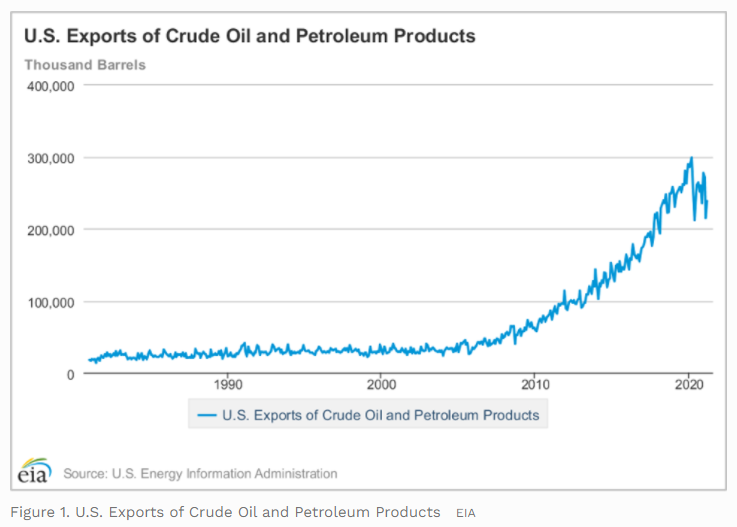 Energy Security/Security of Supply and Geopolitics

Commercial practices rooted in the U.S. increasingly are adopted by other LNG suppliers to provide options in portfolios still characterized by long term purchases.  These include reliance on natural gas hub pricing (the Henry Hub index) rather than formulas linked to oil price.  More flexible contracting is making inroads, with shorter contract periods, less onerous “take-or-pay” clauses, and ability to alter destinations.  With the onset of the pandemic, market participants were able to negotiate workarounds for LNG shipments they could not take.  The solutions incorporated fees and, while they represented one-off arrangements, allowed market participants to avoid the burden of force majeure actions, providing peace of mind for many customers as the Covid-19 waves played out. 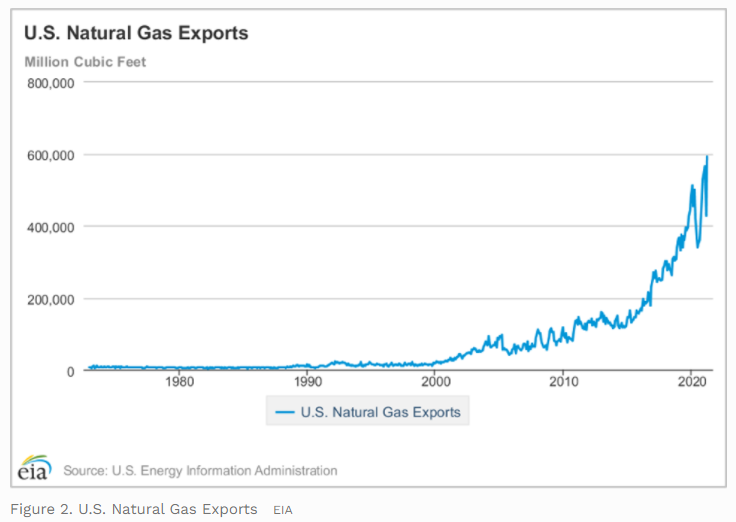 Light handed government oversight of the U.S. natural gas sector encourages buyers who do not need to worry about geopolitical implications if they rely on U.S. gas.  U.S. LNG export projects carry U.S. Department of Energy certification for sales to non-Free Trade Agreement countries.  Many non-FTA countries have more exposure to geopolitical risk in making energy choices, and it is in these locations where the energy security benefits of U.S. LNG trade are most clearly evident.

For example, in Atlantic trade to Europe, U.S. LNG plays an important role in deterring Russian, gas-derived influence in Central and Eastern Europe (CEE).  As diversification in the CEE region grows, these concerns should become less pronounced.  Of importance is the region’s access to LNG supplies via terminals in Croatia, Lithuania, and Poland. The contribution of U.S. LNG to diversifying natural gas supply in this region and in other demand centers around the world, and to ensuring greater security of supply, cannot be overstated.  Competition can be an effective alternative to overt policy actions such as sanctions, which can engender broad and unintended consequences.

When U.S. LNG is an alternative to coal the result is significant reductions in emissions.  A recent study supported by WSTN and a highlight of our webinar indicates that natural gas produced, liquefied and shipped from U.S. western basins could amount to 42-55 percent reductions in net life cycle emissions if used to replace coal-fired power generation in China, India, South Korea, and Taiwan.  Importantly, these reductions incorporate all greenhouse gas emissions, not just carbon dioxide. Based on all available information, we think that U.S. LNG sourced from any domestic basin, even with longer shipping distances, would present vast improvements in the Asia-Pacific region.

As opposed to natural gas, coal production and use are more widely distributed making it a fuel of choice for many countries. Countries without domestic coal resources usually have access to a wider variety of suppliers than they do for piped or liquefied natural gas.  Coal suppliers are often neighboring countries, affording relatively easy and cheap logistics as compared to piped natural gas and LNG.  Ability to access coal at any time at an affordable price is usually much better assured than that of natural gas.

The access and low cost for both the commodity and associated logistics makes coal a formidable competitor to LNG from any source.  Price sensitive customers in many countries routinely switch out of piped natural gas and/or LNG if coal is more affordable.

These patterns raise an alluring question: can the benefits of energy security and lower emissions be coupled in ways that not only benefit U.S. LNG export customers but also U.S. interests?

In fact, the energy security and environmental benefits of access to clean burning natural gas supplies via U.S. LNG exports are closely intertwined.  Sourcing natural gas from the U.S. pushes greater transparency into global trade and markets on both fronts.  Not only is the U.S. natural gas marketplace more transparent, fostering the spread of innovative commercial practices, but so is U.S. environmental oversight, including monitoring, compliance, and enforcement, along with performance of U.S. operators.  U.S. LNG companies have seen the opportunity and taken the lead already.  As one of our colleagues put it, to be in the business of developing U.S. LNG for global export means contributing to net greenhouse gas emissions reductions for the planetary air shed.  Regulatory and policy support will make these efforts more likely to succeed especially if they are designed so as to keep U.S. natural gas and LNG affordable.  This means fostering development of U.S. natural gas resources and infrastructure for both U.S. and international energy users as the industry continues to reduce emissions, hone business and commercial practices, and expand its influence worldwide.

Blending the dimensions of energy security and environmental improvement avoids the pitfalls of thinking “in silos” rather than globally.  Further expansion of natural gas use in one region or country (for instance, the U.S. or Europe) might have diminishing decarbonization benefits given the scale and scope of our modern economies.  Globally, exports of U.S. natural gas to other countries where LNG replaces coal could be a highly effective instrument of environmental improvement on a world scale while fostering energy security.  Thinking globally also avoids the “myopic arrogance” of denying cleaner energy supplies and improved energy security to emerging and developing nations that, in the absence of a U.S. supply option, are left with coal and questionable regimes as unreliable partners for energy trade.

That is a “twofer” that U.S. citizens, businesses, and policy makers should be able to get behind.

Michelle Michot Foss is Fellow in Energy, Minerals & Materials at Rice University’s Baker Institute for Public Policy-Center for Energy Studies.  Go here to read recommendations on minerals and materials and here for all briefs to the new administration.

Indonesia to start 27 midstream projects in Asia through 2025