Russia’s president Vladimir Putin held talks in St Petersburg with his Turkish counterpart, Recep Tayyip Erdogan August 9. But while the Turkish leader said after their meeting that the Turkish Stream project for a Russian gas pipeline under the Black sea to Turkey project would indeed be implemented, the actions of Russia’s leader would appear to indicate that he still keeping his options open.

“The Turkish Stream project will be implemented,” Russian agency Tass quoted Erdogan as saying after the meeting, “We’ll be taking the necessary steps to back Russian gas supplies to Europe via this gas pipeline together with involved ministries and departments," he added.

Turkey's ambassador to Russia, Umit Yardim, managed expectations the day before, saying he did not expect the two sides to sign an agreement on Turkish Stream in the near future. “The talks have been going on, but we are still far from signing the agreement,” he told Russia 24 TV channel.

And Russian sources, commenting just before the meeting, told Russian agency Tass that “the issue of discounts for the Russian gas supplied to Turkey has long been on the top of the agenda."

Only four days before meeting Erdogan, Putin was in contact with Bulgaria, discussing a possible revival of the South Stream project that would have seen a Black Sea gas pipeline terminate in Bulgaria. And just 24 hours before the meeting, he was in Baku discussing tripartite cooperation between Russia, Azerbaijan and Iran on energy issues.

Overall, it still seems likely that Russia will seek to monetize its extensive investment in its own infrastructure to carry gas to the Russkaya compressor station at Anapa on its Black Sea coast by constructing the Turkish Stream pipeline onward from Anapa to a landfall at Kiyikoy, on the coast of Turkish Thrace.

However, the very fact that, according to Bulgaria’s prime minister Boyko Borissov, Russia and Bulgaria have agreed to set up working groups to look at the possible resumption of work on South Stream – the project that Putin himself discarded in place of Turkish Stream – means Moscow has additional leverage in negotiations with Ankara.

There is a very strong rationale for at least the first two strings of the originally planned 4-string 63bn m³/yr Turkish Stream system. The physical pipe for the initial two strings has already been delivered, either in full or in great part, and is on the dockside at the Bulgarian port of Varna. And although Russia has signalled that it does not expect an absolute end to all transit of gas through Ukraine once current transit contracts come to an end in 2019, it is clear that Russia wants to wind down transit through Ukraine to the absolute minimum. 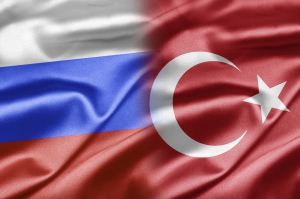 One 15.75bn m³/yr string of Turkish Stream can replace current gas deliveries flowing to Bulgaria, Greece and, above all, Turkey, across Ukraine and via the Trans-Balkan pipeline. A second 15.75bn m³/yr string can be used to meet an expected increase in Turkish gas demand over the next several years. It also can be used to deliver around 10bn m³/yr of gas to customers in the European Union if Gazprom should seek space on the Trans-Adriatic Pipeline (TAP) now under development from Turkey’s border with Greece to southern Italy.

Although this has been a theoretical possibility ever since Turkish Stream was first proposed in December 2014, Gazprom does not appear to have approached the shareholders of TAP about such a move. Turkish Stream would also help to cement a strategic alliance, at least in energy issues, with Turkey, and put an end to the kind of dreams, entertained by Erdogan during the nadir of Turkish-Russian relations last autumn, that somehow Turkey could do without Russian gas altogether.

Putin’s visit to Baku, where he and the Azeri president, Ilham Aliev, held trilateral discussions with Iran’s president, Hassan Rouhani, yielded another element in an increasingly intriguing puzzle: a joint statement in which the three leaders specifically agreed to work together on the shipment and delivery of gas. Putin himself, according to Russian reports, commented that realization of projects on exploration and development of oil and gas fields was the priority aim in cooperation between the three countries.