Turkey’s president Recep Tayyip Erdogan met leader of Libya’s internationally recognised government Fayez Al-Sarraj in Ankara on Thursday and promptly announced that the two countries plan to strengthen their bilateral ties in the East Med. What lies behind this is Turkey’s determination to strengthen its geostrategic, political and economic dominance in the region. Turkey sees Libya as a gateway to the region. It also provides a domestic diversion to the severe impact of Covid-19 on Turkey and its economy.

Central to this is the Memorandum of Understanding (MoU) between Turkey and Libya on ‘delimitation of the maritime jurisdiction areas in the Mediterranean’ signed last November. Turkey claims this grants it the right to drill for hydrocarbons in the areas covered by the MoU – a right that nobody else recognises. Greece has declared the deal ‘null and void’.

Turkey has taken this further. It published a map in its official gazette this week showing 24 blocks for exploration, as close as six nautical-miles from Rhodes, Karpathos, Kassos and Crete. Already the Turkish Petroleum Corporation (TPAO) has applied for exploration permits.

Turkish Energy Minister Fatih Donmez announced last week that Turkey will start exploration and drilling in areas covered by the MoU within three to four months.

Turkey also said that the MoU gives it a say in, and can ultimately obstruct, the EastMed gas pipeline that would have to cross areas covered by the MoU.

Greek Foreign Minister Nikos Dendias said last week “Greece was and remains fully prepared to deal with this provocation, if Turkey decides to implement it.”

These actions add another front to the increasing number of areas of confrontation between Greece and Turkey at a time when both countries should be concentrating their efforts on how to recover from the devastating impact of the pandemic on their economies.

In the meantime, following US Undersecretary for Energy Resources Francis Fannon’s confirmation at an Atlantic Council webinar earlier in the week that islands are entitled to EEZs and continental shelves, the US State Department followed EU’s lead and called the MoU “provocative and unhelpful.” Fannon also said that the MoU does not create legal rights and cannot affect the rights of other states in the region, such as Greece.

But Turkey is determined to proceed with exploration and drilling in the EEZs of Cyprus and Greece. Its aim is to create facts in support of its claims, perhaps in preparation for eventual negotiations.

Cyprus and Greece, with support from the EU and the US, must continue to protect their maritime rights. Turkey’s distorted interpretation of international maritime law must be confronted. Turkey cannot enforce this position merely through force. When negotiations eventually come, accepted customary international law will prevail.

But there are also increasing signs of other worrisome developments in the region. 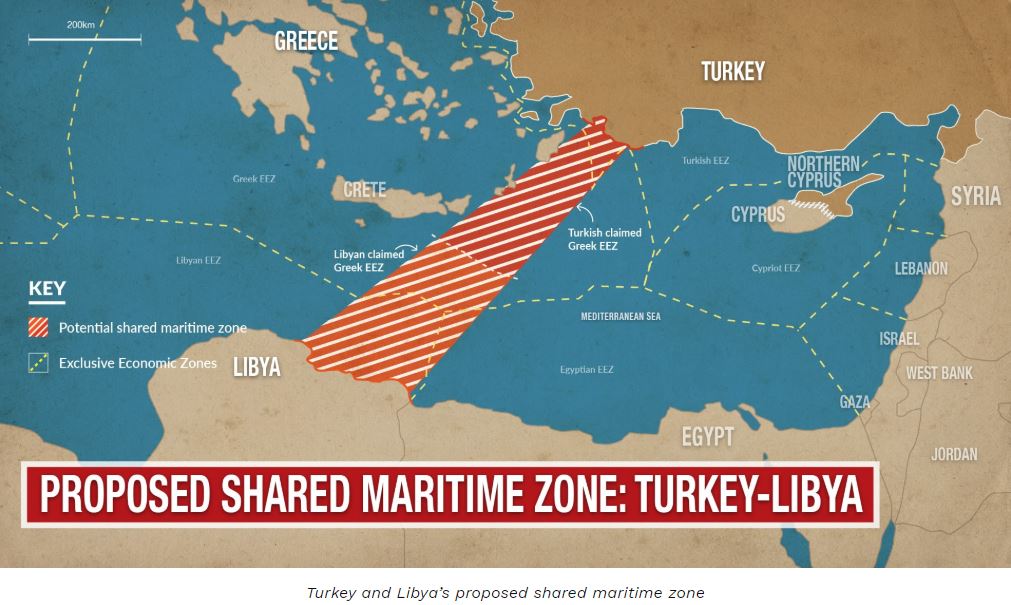 Can Cyprus and Greece count on Israel and Italy?

During the last few weeks there has been an increasing stream of articles about improving links between Turkey and Israel and Turkey with Italy.

Even though the chemistry between Erdogan and Israeli Prime Minister Benjamin Netanyahu continues to be adversarial, some see signs of thawing in the relationship between the two countries.

Israel’s ambassador to Turkey Roey Gilad wrote an article in a Turkish newspaper last month bringing up common interests in Syria. He said that Turkey and Israel did not have to agree on everything and that Covid-19 and other challenges might work in favour of normalising relations in terms of trade, tourism, energy and academic cooperation. He added “The ball is on the Turkish side.”

Subsequently, Jerusalem Post commented that “A new Israeli foreign minister, Turkey’s battles in Idlib against the Iranian-backed Syrian regime and a convergence of necessity for dialogue in Syria and even the Mediterranean could point to a new leaf in Israel-Turkey relations, after a decade of difficulties.”

Erdogan, however, is not making this easy through his increasing attacks on Israel over Palestinians and its intention to annex half of the West Bank.

No doubt these issues will be part of the meeting on June 16 between Mitsotakis, Anastasiades and Netanyahu in Israel.

At a meeting in Ankara mid-January, Italian Prime Minister Giuseppe Conte and Erdogan discussed Libya and bilateral relations and steps that can be taken to improve cooperation between their countries. Regionally, Turkey is Italy’s main export market, with many Italian business interests in the country.

In early April Turkey sent medical supplies to Italy to support “a true friend” in the fight against Covid-19 – a move welcomed by NATO.

In addition, Italy refused to sign the Greece-Cyprus-Egypt-UAE-France communiqué on May 11 condemning “Turkey’s illegal activities and expansionism in pursuing East Med natural gas” and in Libya – so did Israel. Italy also refused to sign the EastMed gas pipeline agreement in January and subsequently.

These developments show that both Israel and Italy can be ‘friends’ but cannot be relied-upon – especially where it involves their national interests.

Look at the opportunities 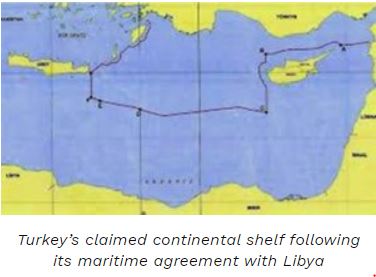 The European Council on Foreign Relations (ECFR) wrote in a recent report: “Given the potential for instability in the eastern Mediterranean to affect core EU interests – migration, counter-terrorism, energy security, sovereignty, and more – European states not directly involved in the overlapping conflicts should help improve the relationship with Turkey.”

Not that long ago, in December and January, both Greece and Turkey made encouraging statements about resolving their differences through negotiation. The European Commission also sent Vice President Margaritis Schinas to Turkey in December to demonstrate commitment to “continuing engagement and cooperation with Turkey” through dialogue.

With the pandemic receding, the time may soon come for the EU and the US to find a way to bring the two countries away from the brink of confrontation, back to negotiation.