For decades, conventional wisdom held that the natural gas flows westward and southward from the border between Ukraine and the European Union. But this paradigm no longer serves either party, given the tectonic shifts in the energy ecosystem and geopolitics of the last few years. It is a high time now to reimagine the Trans-Balkan gas transit corridor and review its potential to enhance the European energy security. 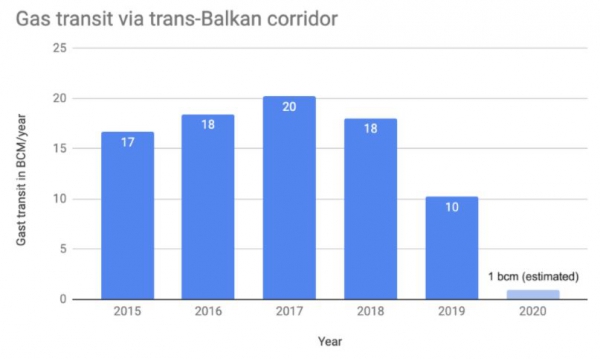 Reverse flows introduced by 2015 - virtual or otherwise - have proven the value of bidirectional east-west transit.  And, for the first time on August 26th this year, Gas TSO of Ukraine carried out a south-north transmission request. It was placed by a local commodity trader, shipping natural gas up the Trans-Balkan pipeline from Greece through Bulgaria and Romania to Ukraine. The purchase was a proof of concept designed to demonstrate the technical viability of this route, even if it is not yet commercially attractive to other gas traders.

The question of “whether the gas will continue to flow across the Trans-Balkan pipeline via Ukraine, the Republic of Moldova, Romania, Bulgaria, Turkey, Greece and the Republic of North Macedonia, or whether the direction will be reversed” has been asked by the independent commodity intelligence servicealmost a year ago.  And we have seen a sharp decline since. As of today, we don’t expect the transit volume on a segment of the pipeline running  through Ukraine (from Romanian to Moldovan border) to exceed 1 bcm for the current year. In other words, even the most optimistic scenario brings us to the utilization rate of a meager 3-4%.

GTSOU can hardly find it commercially justifiable to maintain this pipeline. A strategic asset with such significant capacity, trans-Balkan gas corridor can and should be a guarantee of energy security for South Eastern Europe. If there interruptions or maintenance work on TANAP and/or TurkStream, the gas flow could still be assured. This corridor currently gives countries in the Balkan region access to the gas markets of Central Europe and Ukraine’s storage facilities – largest in Europe.  Without significant transit volumes, neither Ukraine, nor Bulgaria and Romania can defend the operational expenditure. So it is important to understand the real risks of supply disruptions, should this pipeline be marked for decommission.

So what does the future have in store for the Trans-Balkan pipeline?

Before that question can be conclusively unanswered, we must consider several concurrent developments in and around Eastern Mediterranean and Black Sea that are bound to reshape the dynamics of the regional energy system: 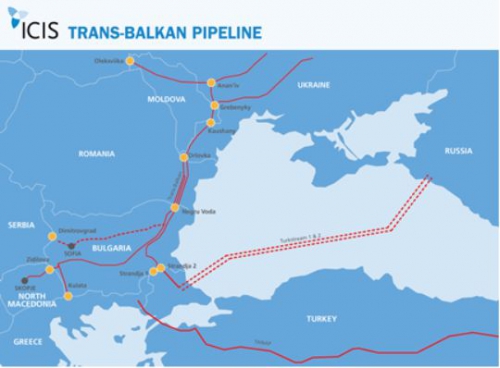 Eastern Med gas discoveries of the last decade: four major fields were identified in the territorial waters of Israel, Egypt and Cyprus from 2010 onward. The combined resources are estimated at about 1,000 bcm. Production has already commenced, but the range of the export destinations and the means (LNG terminals or pipelines) are yet to be fully determined.

August 2020 gas discovered in the Black Sea by Turkey. A new 320 bcm gas field was announced by President Erdogan on August 21st. And analysts predict that the production could commence as soon as 2023. Turkey can now justifiably expect greater energy security and reduction in the gas imports.

Meanwhile, tensions are rising in the East Mediterranean. “Any small spark could lead to catastrophe,” is how the German foreign minister Heiko Maas described the standoff between Greece and Turkey. The collision involving a Turkish energy exploration ship - Oruc Reis - is what precipitated the recent escalation, but the disagreement and apprehension over undersea energy resources have been simmering for a while.

Prospects of tightening U.S. sanctions on TurkStream and Nord Stream 2 - the two pipelines which Secretary of State Mike Pompeo recently described as “the Kremlin’s key tools to exploit and expand European dependence on Russian energy supplies” that “ultimately undermine transatlantic security”. The latest signals from the U.S. Administration have created a great deal of uncertainty and wariness among the companies involved in the TurkStream and the Nord Stream 2 projects.

Growing LNG capacity in Greece.  Across Europe, despite the COVID-19 outbreak, the share of LNG within the energy imports mix has been steadily increasing. And the gas discoveries in the Eastern Mediterranean created a new impetus for Greece to accelerate and scale up its LNG infrastructure development. Situated near Athens, the Revithoussa LNG plant has been operating since 2000 and has a capacity of approx. 7 bcm per year. And a new facility, currently under construction in Alexandroupolis, is expected to go onstream in 2021 at a capacity of approx. 5.5 bcm per year.

The complexity of the interplay among the aforementioned regional developments is such that no single scenario could definitively describe the path forward. What is clear, however, is that the conventional logic of southward gas flows through the Trans-Balkan corridor no longer applies.

In light of the significant risks that undersea pipelines pose, it would behoove the European institutions and the regional powers, such as Greece, Bulgaria and Romania, to take a fresh look at the existing gas transit infrastructure. How do we employ the current transit capacity to accelerate the phase-out of coal in Eastern Europe? How do we ensure that resource allocation to new projects, be it LNG terminal or undersea pipelines, leads to the diversification of energy supplies to Europe and greater competition in the market? Those are the questions that should guide the policy decisions in Brussels, Athens, Sofia, and Bucharest.

The Trans-Balkan gas pipeline is inexplicably underutilized, so what will it take to redeploy it for the benefit of the consumers in Central and Eastern Europe?

First and foremost, we have to find a way to boost the commercial viability of this route. Arguably, Moldova can pick the lowest hanging fruit, by virtue of updating its tariff calculation methodology and bringing it in line with common European practices. At present, the tariff approved by the Moldovan Regulator is about $11 per 1,000 m3/100 km, while the "historical shipper" - Gazprom – is understood to be getting a 70% discount, paying only $3 per 1,000 m3/100 km.  Clearly, the current situation does very little to promote fair competition, and must be corrected as a matter of first priority.

Secondly, Romania, which boats the second largest gas reserves in the EU, has yet to overhaul its legacy regulations that restrict exports to non-EU countries. So far, Ukraine and Romania have signed one interaction agreement (Isaccea-Orlivka-1). Ukraine stands ready to sign 4 more agreements, given the number of additional interconnection points that exist between Ukraine and Romania, but the process has been bogged down to the benefit of no one. Let us expedite this process and aim for 4 more signatures in the next few months. As Romania is poised to rump up domestic gas production (in particular from offshore fields in the Black Sea), it could play an ever increasing role in the regional energy trade and stands to benefit the most from the bi-directionality of the Trans-Balkan pipeline.

Lastly, the European Union and all of its 27 Member States must stand firmly for the uniformed application of the Third Energy Package. 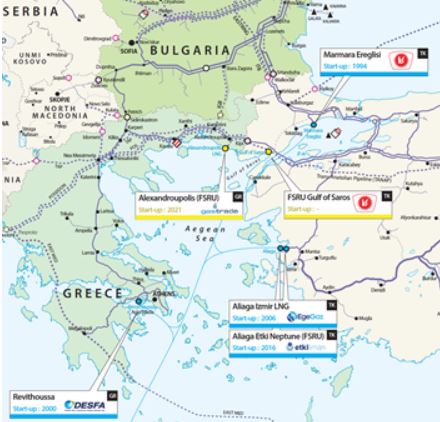 But an exampletion from the EU's Third Energy Package, which was granted to Serbia in 2019 is impeding competition in the energy market already today. The 400-km stretch of the pipeline going through Serbia, in which Gazprom has a controlling stake, boasts a capacity of 13.88 bcm per year. “The pipeline is actually ...not covered by the Third Energy Package and we regret that,” is how Energy Community  Deputy Director, Dirk Buschle, described the situation in an interview with Reuters. To make Gastrans pipeline compliant with the Third Energy Package, a number of remedies and cures are available to Serbia (see the official opinion published in 2019). But at present, there is no appetite in Belgrade to implement them.  So the competition in the market is bound to be distorted, undermining the EU’s interest, and, more importantly, European principles.

European solidarity is clearly in jeopardy here. As individual member states or EU aspirants pursue their separate interests, the Union, on the whole, stands to lose.  Now that Ukraine has completed the unbundling process against all odds, the EU must ensure the mandatory and universal application of its own rules and regulations in Romania, Bulgaria, and Serbia. The gas market does not end at the EU borders. Neighbors, who have committed to comply with the provisions of the Third Energy Package, deserve reciprocation.

Despite the current state of affairs, I am optimistic that the Trans-Balkan pipeline will soon be delivering on its promise and helping revitalize regional economies, boost energy transition away from carbon-intensive coal, and contribute to the diversification of gas imports to Europe. For its part, Ukraine stands ready to deploy its extensive transit and storage network for our common benefit. The principles of fair competition are as useful as our willingness to enforce them; and when Europe defends its interests, rightfully recognizing the geopolitical and national security implications of natural gas trade, all of its members and neighbors benefit.

Article was published on atlanticcouncil.org

Investing in liquefied natural gas in a carbon constrained world