Towards a natural gas renaissance: Energy’s multi-tasker [Gas in Transition]

What’s old is new again, particularly with respect to natural gas. New technologies are transforming common perceptions of one of the planet’s oldest fossil fuels and how it fits into a new net-zero world as governments and industry grapple with creative ways of thinking and finding innovative solutions to old problems.

In fact, innovation was the key theme of Natural Gas World’s Canadian Gas Dialogues series in Calgary, as industry, government and environmental leaders huddled to define the role of gas in the post-Covid world.

From hydrogen, decarbonisation, producing and transporting LNG to exploring novel ways of generating heat, electricity and power to fuel cars – natural gas is at the forefront of finding ways to bring down Canada’s persistently high GHG levels and bring it into alignment with its commitments under the Paris Accord.

Yet uncertainty prevails with respect to government and fiscal policies that will either encourage or stifle investment and innovation. The consensus is that the jury is still out on whether the promise of these emerging technologies can or will be fully realised.

It slices, it dices…

In many ways, gas is the Swiss Army knife of fuels. No other primary energy source offers as diverse an array of optionality in both the way it is produced and how it is consumed. And while renewables such as solar and wind will take on a growing share of the world’s energy mix for years to come, natural gas provides a much-needed “reliable base load energy source” while those technologies mature, said Dale Nally, Alberta’s associate minister of natural gas and electricity.

Until that day arrives, gas offers plenty of promise in the short and intermediate term to supplant coal in power generation and advance the environmental benefits of hydrogen. Though much has been made of so-called green hydrogen, Canada – and Alberta in particular – is well positioned to leverage existing infrastructure to make it a leader in blue hydrogen, produced both from natural gas as well as from off-gases associated with the existing refining and processing infrastructure.

In May of this year, Suncor Energy and ATCO announced plans to develop Canada’s largest hydrogen production facility near Fort Saskatchewan, Alberta, which would also be one of the largest in the world when it comes online in 2028. The project would produce more than 300,000 mt/year of blue hydrogen at ATCO’s Heartland processing facility, reducing Canada’s GHG emissions by nearly 3%, or some 2mn mt/year.

About two-thirds of the output would be taken up in Suncor’s oil sands refining processes, reducing refinery emissions and cutting the carbon footprint of its bitumen inventory. Approximately 20% would be funnelled into Alberta’s existing natural gas distribution system, further reducing emissions by an unspecified amount. The companies specifically said appropriate policies and regulatory structures at both the provincial and federal levels would be needed for the project to move forward.

It’s the kind of collaboration Nally says is needed to advance full-blown hydrogen exports by 2040. Though there has been some controversy over the merits of blue versus green hydrogen – federal policies aimed at phasing out fossil fuel production are almost exclusively aimed at promoting green hydrogen production – Nally said the province “is agnostic to the color of it.”

Despite the immense potential, hydrogen still suffers drawbacks in terms of how it is produced – from hydroelectric dams and nuclear reactors in the case of green hydrogen and existing fossil fuel output in the case of blue – and the infrastructure needed to transport it. While provinces such as Alberta have a well-established gas gathering and transportation network, other parts of the country, particularly in the Yukon and Northwest Territories, lack basic amenities such as roads. Even in more established areas with access to infrastructure and supply – pipes and power lines – hydrogen is still roughly double the cost of gas to generate electricity.

Nagging questions about safety persist in the public perception of hydrogen gas as an alternative energy carrier, and these concerns have precluded the development of standards for items such as hydrogen appliances amid a lagging regulatory framework.

The lack of regulation prompted Greg Caldwell, ATCO’s director of energy systems innovation to caution: “We have to be careful of committing to standards that we can’t achieve.” Caldwell is tasked with the development of a hydrogen utility strategy which encompasses technical, policy and regulatory considerations before hydrogen can be considered prime time – as accessible to the consumer as flipping a switch, setting the thermostat or turning on the stove.

Graeme Feltham, president of Apex Utilities – formerly AltaGas Utilities – said governments need to streamline policies in order to eliminate “regulatory silos” that differentiate between any and all forms of energy, whether they be pipelines, power lines, utilities or producers.

“When they (customers) throw that figurative and literal switch, they just want it to work…this is not a competition” between energy sources such as gas, renewables or nuclear. Felton further noted that hydrogen, in any form, is basically “de-carbonised natural gas”. 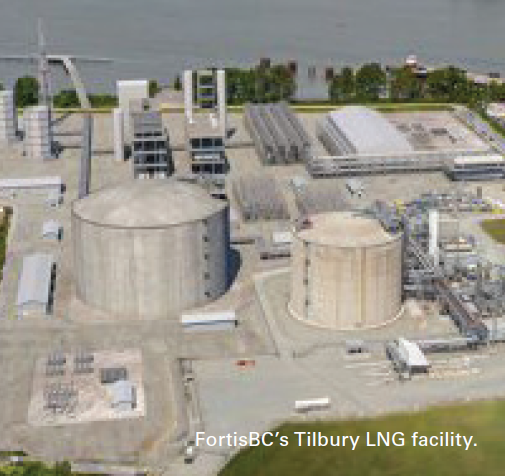 Until that day comes, a great deal of focus will still be devoted to increasing the efficacy and efficiency of existing gas networks. According to Cynthia Hansen, executive vice-president of Enbridge and president of its gas distribution and storage operations, hydrogen uptake depends on specific sources of production and end uses to be a viable business proposition. So-called “renewable” natural gas – obtained from capturing fugitive emissions from facilities and tens of thousands of landfills scattered across the country – “is here today”, she said.

Enbridge operates Canada’s largest gas distribution utility, primarily in Ontario, and its largest oil pipeline. Hansen estimates 3% of the country’s gas stream could be made “renewable” by capturing fugitive methane along its network and reincorporating it back into the system. While it isn’t considered net-negative in terms of carbon emissions, Enbridge is uniquely positioned simply because it owns the network. The company is considering more than 50 smaller projects to advance its goal.

Perhaps the greatest – and possibly most overlooked – potential for natural gas to make meaningful reductions in direct carbon emissions is in the transportation sector. Transportation is by far the largest single source of emissions, according to the US Environmental Protection Agency (EPA), accounting for about a third of all GHGs world-wide. Unlike big stationary factories and facilities, the vast majority come from millions of individual point sources, including planes, trains, automobiles and ships.

According to Mike LeClair, FortisBC’s vice-president of major projects and LNG, bunkering of ships represents one of the single largest opportunities for LNG to make meaningful GHG reductions, particularly on Canada’s West Coast. Less than 1% of ships worldwide – including ironically, big LNG carriers – are configured to run on alternative fuels, with the overwhelming majority burning low-grade bunker fuel. The shipping industry is facing a steep challenge to reduce near-shore particulate emissions, much less GHGs, he noted. One single ship alone can emit as much sulphur as 20mn cars over its lifetime.

While hydrogen and ammonia offer long-term potential, those alternative solutions are not presently viable from either an economic or logistical perspective. FortisBC has teamed with BC Ferries, a provincial government Crown corporation, to refit its vessels to burn LNG from the company’s Tilbury liquefaction facility, which is presently being expanded to meet demand. According to LeClair, LNG offers up to 30% immediate emissions reductions in ports. FortisBC is aiming to make Vancouver a desired “port of call” for the next generation of clean-powered ocean-going vessels.

Likewise, Travis Balaski, operations lead at Inuvialuit Petroleum Corporation (IPC), is working to produce synthetic fuels and LNG from stranded natural gas resources in the Northwest Territories. The Arctic region of the NWT has some of the largest proven deposits of natural gas and hydrates in North America, which were essentially abandoned and left stranded after the collapse of the Mackenzie Valley pipeline project in 2007.

Subsequently, IPC is looking to small scale LNG to provide heat and power for remote Northern communities and provide a cost-effective competitor to diesel for transportation and industrial uses. Balaski admits the value proposition is different in the Far North than even other less isolated regions in Canada.

“The play is that you have a very stranded resource,” he explained. “The arbitrage issues…are unique to the North because the condensate stream is essentially worthless without exports.” The Inuvialuit Energy Security Project, which IPC is developing with Balaski as its lead, would liquefy natural gas from a suspended natural gas well near Tuktoyaktuk and use some of the condensate from the gas stream to produce synthetic diesel fuel.

While there is still a preference to bypass gas and go straight to electrification of transport fleets, it remains impractical on a large scale from both a cost and practical perspective of achieving meaningful reductions, Ker said. “Natural gas gets us immediate results,” he said. On the bigger question of perhaps one day electrifying long-haul truck transportation, he wondered, “is the squeeze worth the juice?”