In late November, France's TotalEnergies signed a package of agreements worth more than $2bn with Libya’s Government of National Unity (GNU). In a press release announcing the signing of the agreements, the French major talked up the new and innovative aspects of these deals – such as the fact that they were inked during the Libya Energy & Economic Summit in Tripoli, the first economic conference held in the North African state in the last decade.

Among the deals was a memorandum of understanding (MoU) on a high-capacity solar power project. It is worth noting, though, that the bulk of the financial commitments TotalEnergies mentioned in its statement will be going to Libya’s well-established oil sector – and to a brownfield project at that. The company has arranged to increase its holdings in the Waha oilfields from 16.33% to 20.41% by acquiring half of the 8.16% stake now owned by the US-based independent Hess, and it intends to spend $2bn to raise the production capacity of these assets, which include the 100,000-barrel/day North Gialo field. 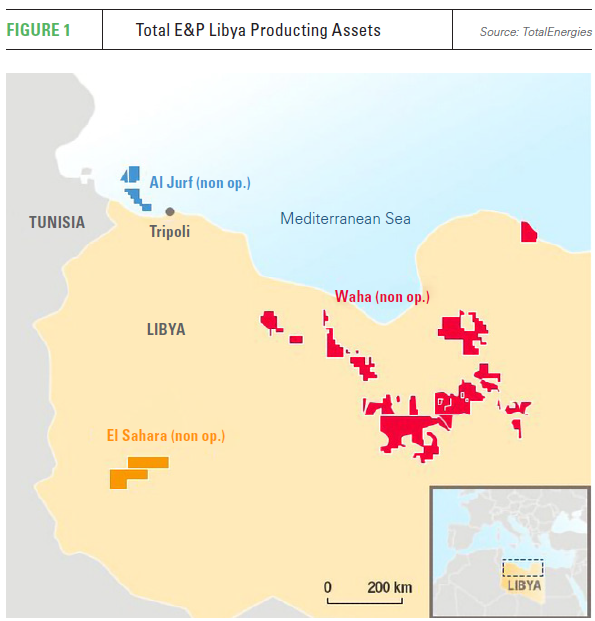 Even so, the French giant is treading some new ground. It appears to be pioneering a new model for working with Libyan authorities that encompasses natural and associated gas and gas-to-power projects, as well as renewable energy, rather than focusing primarily on crude oil for export to world markets.

In its press release, TotalEnergies described its plans for Libya’s gas sector by saying it was ready to invest in projects that would reduce gas flaring at oilfields and facilitate the delivery of gas to local thermal power plants (TPPs). It indicated that it planned to build gas gathering networks at the Waha oilfields and arrange for the gas collected by these networks to be pumped to Libyan TPPs.

With respect to solar energy, TotalEnergies has signed an MoU with the General Electricity Company of Libya (GECOL), the national power provider, on the establishment of 500 MW of solar generating capacity that can be connected to the national transmission grid. These facilities will provide power to industrial facilities in the Waha area, the French major said.

The company does not appear to have sorted out all the details of these projects. On the gas side, it has not divulged how much gas it expects to collect in its gathering network and deliver to power stations. On the solar side, it has not talked about when it might reach the stage of signing an agreement with GECOL on the construction of photovoltaic facilities near the Waha oilfields.

Nevertheless, TotalEnergies has emphasised that it is taking this approach – that is, looking at opportunities for gas and power development along with oil – as part of a wider effort to improve its environmental, sustainability and governance (ESG) scores. The French giant’s chairman and CEO Patrick Pouyanne made this point in the press release, saying: “These agreements reflect TotalEnergies’ willingness to strengthen its investments in Libya’s energy sector. We aim to assist the country in building a more sustainable future through a better use of the country’s natural resources, including solar energy, which will directly improve the accessibility of cleaner, more reliable and more affordable electricity to the Libyan people. We are thus leveraging our leadership position in the region, where the lowest-cost hydrocarbons are produced, to pursue our development in renewable electricity. These agreements further illustrate the sustainable development model of TotalEnergies, a global multi-energy company that supports producing countries in their energy transition.”

The company’s motives for exploring these avenues are probably not entirely high-minded, though. TotalEnergies may see investment in domestic power projects as a means of convincing Libyan authorities to authorise other important initiatives such as the development of the Waha oilfields.

Hamish Kinnear, a Middle East and North Africa analyst for Verisk Maplecroft, notes that TotalEnergies’ first attempt to enter the Waha project by purchasing a 16.33% stake from US firm Marathon Oil had not initially been successful. The French major’s bid for Marathon’s asset ran into obstacles because Libya’s National Oil Corp (NOC) was worried about the possibility that international oil companies (IOCs) might exit the country in response to ongoing unrest and fighting between armed factions, he tells NGW.

“[NOC] initially withheld its approval of TotalEnergies’ purchase of Marathon’s Waha stake in 2018 due to fears over an exodus of IOCs,” Kinnear explains. “The wider investments by TotalEnergies beyond the purchase of the Waha stakes themselves should be viewed with this context in mind: It is looking to allay NOC fears of an IOC exodus by demonstrating its commitment to the Libyan oil and gas sector.”

TotalEnergies was, of course, able to overcome NOC’s initial resistance, and now it stands to see its stake grow once again, even as it moves ahead with gas and power projects. But it may not be the only IOC to do so. Another European major declared its interest in Libya in late November: Eni, which has been a major investor in the North African state for a long time.

Speaking during the Libya Energy & Economic Summit on November 22, Eni’s COO Alessandro Puliti noted that his company had already pumped more than $10bn into Libya’s oil and gas industry and was dedicated to the development of the country’s resources. “Libya is a very significant remaining oil and gas prospect, and Eni is ready to support this development,” he said.

Puliti did not announce any new projects, but he did report that his company was ready to respond to rising domestic demand for gas within Libya. “In the past years, we have [shifted] increasing shares of gas production from exports to the domestic market to fulfill domestic market demand,” he stated. “This clearly demonstrates the utmost attention we have paid to the economic and industrial development of Libya.”

The Italian major has also not ignored the prospects for solar power in Libya. In June 2021, for example, the company was reported to be working with NOC on a study of proposals for the construction of a solar generation facility near Rebiana, an oasis in the south-eastern Kufra district.

It remains to be seen whether Puliti’s show of interest in Libya’s domestic gas demand or studies of the Rebiana solar power project will have any immediate consequences for Eni. Thus far, the Italian firm has not followed TotalEnergies’ example by making any concrete new commitments in North Africa.

For its part, Libya may not expect such commitments. Kinnear does not believe NOC has any specific expectations on this front. “I don’t think there’s anything as formal as a set contractual obligation to support the national power sector for IOCs operating in Libya,” he tells NGW. “However, Libyan authorities – to the extent that there is a central authority, given the continued political tumult – likely expect some degree of commitment to invest in the local power grid to supplement the electricity usage of upstream operations.” 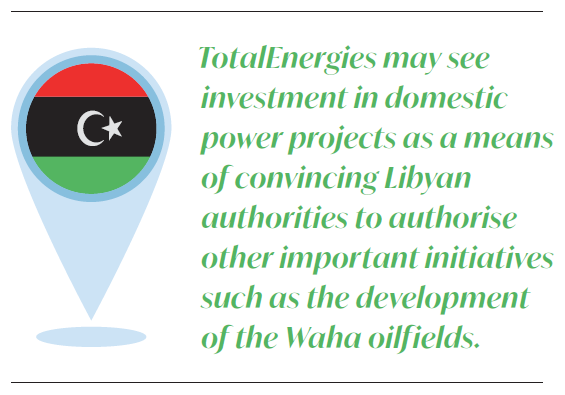 Meanwhile, NOC is operating under the expectation that it will provide more natural gas to the power-generating sector in the long term through the Western Libya Gas Project (WLGP), a 50:50 joint venture with Eni that is developing fields in the Sirte basin, Kinnear says. “Production from the Western Libya Gas Project is set to rise, and I believe it is NOC’s plan to use some of this for domestic power generation, reducing reliance on fuel oil."

GECOL also has good reasons to support the development of gas for domestic consumption, notes Martin Sherriff, head of the Middle East-North Africa (MENA) group at Welligence Energy Analytics. “Libya’s proven gas reserves are 50 trillion ft3 [1.416 trillion m3], the fourth highest in Africa,” he comments. “The national electricity company has reinstated plans for a major combined-cycle gas turbine power plant in Benghazi, which could have a generation capacity of up to 1.5 GW. An additional 6,075 MW of new capacity has been planned for 2021-2030, including facilities in Sebha, Derna, Tripoli, Khoms, Tobruk and Benghazi.”

Overall, then, there seem to be good reasons to expect Libyan authorities to push IOCs to include gas, gas-to-power and solar projects in their oil development programmes. IOCs should expect these projects to face some obstacles, though.

Sheriff draws attention to the fact that Libya might still revert to political turmoil, saying: “[Any] high profile project is at risk from being attacked ... Planned elections in the country are close to collapse, which could shatter hopes at re-uniting the divided country. Further conflict could reignite ... as rival factions have accused each other of bribing and intimidating officials to reinstate their candidates, which include high-profile figures such as warlord Khalifa Haftar and Saif al-Islam Qaddafi, the son of the former dictator.”

Kinnear, meanwhile, highlights the logistical difficulties facing solar energy schemes. “The process for importing the necessary construction materials for solar farms ... may prove to be quite tricky, given the precarious political and security situation in the country. This will be a long-term problem for all IOCs considering similar projects,” he remarks.