Following the May 28 formal shareholder vote, France’s Total will become TotalEnergies. It is on the surface following a trend: other companies have similarly rechristened themselves, even though petroleum production remains their sole activity.

And it stands in contrast to the other French giant Engie, whose name suggests NG even as it backs away from much of its natural gas business, selling its LNG business to Total and upstream to Neptune Energy. But the electricity firm EDF and its subsidiaries also represent the state’s LNG and gas trading interests.

Total has already gone some way down the green energy route, one that began with the disposal of its coal and tar sands businesses. But crucially it has retained the core business on which it relies for revenues and dividends: crude oil and gas production and the refining and marketing segments. Petrochemicals too will continue to be needed while society moves towards a net-zero carbon future.

In a February presentation to analysts when it announced its new name, the top executives and CEO Patrick Pouyanne set out an ambitious growth strategy for LNG, renewable energy and for carbon reduction. But reassuring investors that it is not going to follow BP, it also mentioned some jewels in the safe, such as its new oil province off South America. These will become long life-time projects for future income and low cost production and reserve replacement. 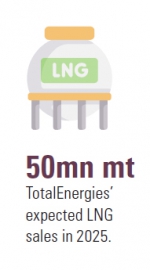 LNG equity production and trade will be a big part of its decarbonisation plans. It expects to produce around 30mn mt/yr of LNG and sell as much as 50mn mt/yr by 2025, up from 20mn mt and 38mn mt last year.

But displacing coal is no longer enough: it will have to become a cleaner fuel. “We see a lot of actors looking at offsetting their carbon emissions,” Total’s senior vice president of LNG Thomas Maurisse tells NGW. “We sold one LNG cargo to Cnooc last year which is carbon neutral throughout the full value chain.”

But to sell the output of a plant’s 20-year life using forestry-related and other certificates is not practical. The task of removing, reducing, avoiding or capturing the CO2 associated with the LNG value chain has to start at the wellhead, as the environmental attention is directed at carbon emissions and methane leaks. 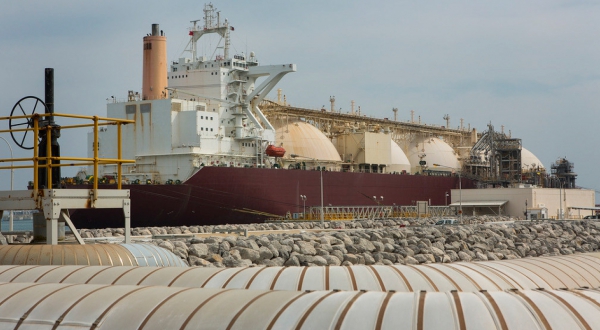 Maurisse says that there are a number of approaches to take. “In the case of Oman, solar power coupled with all-electric design will eliminate emissions. In Mozambique LNG, we will build the plant as clean as possible: the carbon intensity, from the well to loading LNG on the vessels, will be about 25 kg CO2e/barrel of oil equivalent, which is one of the world’s lowest.

“We will use best in class technology and electrification. We will limit the emissions from the upstream and liquefaction. The vessels we build to service these plants will be best in class and use the latest technology to reduce gas consumption, including highly efficient engines.

“We are part of the only LNG plant that took final investment decision (FID) last year: the Energia Costa Azul plant, taking LNG from the Mexican Pacific Coast, the shortest route from North America to Asia. The carbon intensity of the plant will be 28 kg CO2e/boe. There is also the potential to expand the plant,” Maurisse says. “Regarding methane emissions, we have set a target of less than 0.1% on all our operated assets.”

Total also owns a stake in Novatek and is a partner in its own right in the Yamal and subsequent LNG terminals in Russia’s far north. And it is hoping to partner Qatar in its major expansion of the North Field. “We have a history with Qatar and we have some strengths with our portfolio, our positions in Europe and Asia,” Maurisse says. Qatar, whose FID this year came as no surprise after several public statements of intent in the past, is planning to build in carbon capture and storage, so not much advocacy work will be needed there. 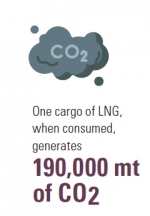 A major difficulty facing producers is the lack of common standards for measuring the emissions of carbon and methane along the value chain. So he says Total is “seeking to push for this through the trade associations we are members of, such as the Oil and Gas Methane Partnership; the Sea Cargo Charter Initiative and the France-based International Group of LNG Importers (GIIGNL). These organisations will benchmark trajectories to cut emissions. GIIGNL has started to work on ways to standardise emission measurements and this will lead to greater transparency.”

As with other LNG-focused international oil companies, Asia is where Total’s primary focus is to be. Maurisse says: “We will accompany the growth of LNG in Asia: China, Korea and Japan. Korea has announced a major coal phase-out in power generation which will support LNG growth. Japan though is a little more uncertain for the moment.” Much depends on the decision on coal, nuclear and renewable energy. “Over the last few months we have seen Korea more active than Japan in contract renewals or signing up new supplies of LNG,” he says.

These countries have all made a strong commitment to the energy transition, factors which will support LNG. But “China is a very important market for Total, and it is where we want to develop, as China will see the most LNG growth,” Maurisse says.

“Shenergy’s majority share reflects its know-how, its expertise and its leading position in Shanghai. The decision-making process for key decisions will require a full alignment of partners. The whole contract life is 20 years but we cannot comment on the price or the contract structure for reasons of confidentiality,” Maurisse says. “Total will deliver the cargos to Shenergy’s terminals. The JV will sell the LNG to customers in Shanghai and throughout the neighbouring Yangtze River Delta regions. Additionally, Total will supply LNG to Shanghai Gas, the natural gas subsidiary of Shenergy Group, for its distribution business.”

He says the LNG market is continuing to evolve but that there were limits to how far it would track the oil market. “We have noticed the move in LNG market towards commoditisation. However, the rate of this change is slowing now: long-term contracts still represent 65% of supply and short-term no more than 35%,” he says. Hybrid contracts, with a mix of European, Asian and US spot gas indexation as well as Brent crude are becoming more common.

This covers index risk. “We want to be an integrated LNG player from upstream to downstream. We take advantage of our regasification infrastructure in Europe to play the arbitrage between the Pacific and Atlantic Basins, as we did in 2019 and last year,” he says.

According to UK consultancy Timera Energy, the end use consumption of an LNG cargo dominates its carbon footprint, with 190,000 mt CO2 equivalent being a reasonable benchmark for a standard cargo. The journey from well head to burner tip can add another 20,000-70,000 mt.