Marathon Oil said March 2 it has closed the sale of its Libyan subsidiary, which holds a 16.33% non-operated interest in the Waha onshore concessions to France’s Total for $450mn cash. It marks the US firm’s exit from Libya.

The Wafa concessions in Libya’s Sirte basin -- largely oil-producing but with modest gas volumes -- are now jointly owned by Libyan state NOC with 59.18%, Total and ConocoPhillips (each 16.33%) and Hess 8.16%. They are operated by Waha Oil Company, a 100% NOC owned entity. Marathon said the divestiture closed on March 1, with an effective date of January 1 2018.

Total said that the Waha concessions currently produce around 300,000 boe/d but that, thanks to an ongoing restart of the existing installations and resumption of development drilling, it is expected to exceed 400,000 boe/d “by the end of the decade”.

Greek contractor J&P (Joannou & Paraskevaides) said on its website that it was awarded a $189mn contract by Wafa Oil Co to install the Faregh phase 2 gas process plant and facilities -- including eight gas production wellheads and gas gathering flowlines – but did not state the contract's completion date. However J&P shows several photos appearing to show its completion, including the one below (courtesy of J&P).

Consultancy Wood Mackenzie's vice president for corporate analysis, Luke Parker, said that Total's deal follows Occidental's 2016 divestment from Libya to Austria's OMV, adding: "We wouldn't be surprised to see Conoco Philips and Hess exit too." He added that it comes at a time when Libya's production is resurgent, with unofficial sources reporting oil exports of 1.1mn b/d in February 2018, which would be the highest levels since 2014. 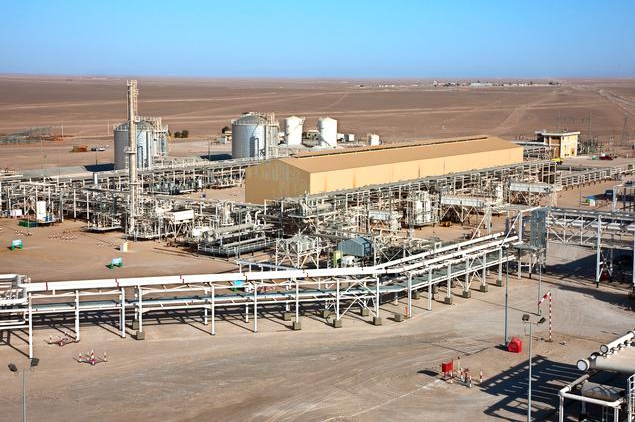