On May 10th, Toreador and Hess Corporation, announced they have signed a definitive agreement, under which Hess may become co-holder of Toreador's exploration permits in the Paris Basin, France,

Toreador and Hess  through their respective wholly owned French subsidiaries Toreador Energy France S.C.S. and Hess Oil France SAS, announced that they had signed a definitive agreement under which Hess may become co-holder of Toreador’s exploration permits which represent approximately 1 million gross acres (of which 680,000 acres awarded and 360,000 acres pending). in the Paris Basin.

This partnership combines Toreador’s acreage position covering the Paris Basin shale oil source rock system with Hess’s position as a leading shale oil producer in the US along with its international operating and financial strengths.

Craig McKenzie, President and CEO of Toreador, said "We are excited to have chosen Hess as our partner in the Paris Basin. The agreement is a significant step in the execution of Toreador's growth strategy and a strong source of value for our shareholders."

Greg Hill, President of Worldwide Exploration and Production of Hess said, "We are very pleased to join Toreador in France. The technology we use to produce oil in U.S. unconventional plays will have a direct application to the Paris Basin. Hess views this opportunity as an area of future growth for Hess, our partner and the industry in France."

Hess is a major global energy corporation with extensive shale oil expertise. They hold the second largest acreage position in the Bakken Formation with a total of 570,000 acres, 117 operating wells, and a net production of 15,000 bbls/d.  Together, Toreador and Hess will bring the proven experience in the Bakken Formation to the Paris Basin, using technologies commonplace in the U.S. but not yet employed in Europe.

Under the terms of the agreement, Hess will make a $15 million upfront payment and invest up to $120 million in fulfillment of a two phase work program.

Phase 1 will consist of an evaluation of the acreage and drilling six wells, with the first well planned for later this year. Hess must spend a minimum of $50 million during Phase 1 of the work program, which includes 100% of Toreador’s share of capital costs. Depending on the results of Phase 1, Phase 2 is expected to consist of appraisal and development activities. Following Phase 2, provided contractual obligations have been met, Hess will hold a 50 percent share of Toreador's working interest in the covered permits.

The transaction is subject to French governmental approval. 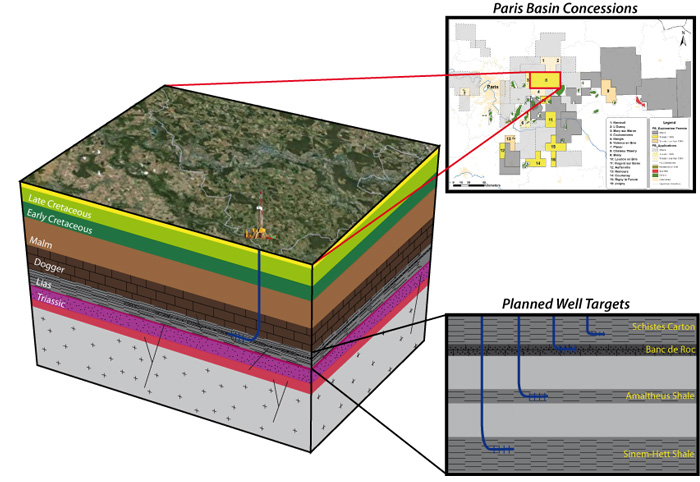 Austria’s Russian Gas Imports ‘Back to Normal’ in Jan: OMV