Much has changed since the International Energy Agency (IEA) released its medium-term natural gas outlook last June. Several of its core assumptions have changed, deepening and extending the gas glut if they are not disproved in time.

The biggest changes relate to actions to mitigate the spread of the coronavirus (now termed Covid-19) both within and from China; an extremely warm – so far – European winter devastating gas demand; and Qatar sanctioning a major expansion of its LNG liquefaction capacity. A significant proportion of this could be on line by the middle of next decade.

Questionable assumptions by the IEA include the rate of economic growth and hence the growth of energy and gas consumption. The International Monetary Fund (IMF) – whose forecasts the IEA uses – has consistently overestimated medium-term growth over the past decade. Another change has been new energy policies in China and Europe that may limit gas demand and imports.

The IEA does not explicitly discuss global balances in its medium-term gas outlooks, but its view on the global gas glut can be inferred from its assumptions for regional gas prices. In Gas 2019, the agency assumed the Dutch Title Transfer Facility (TTF) price in the Netherlands averages $6/mn Btu (mn Btu) in 2019 and 2020, slipping to $6.40/mn Btu in 2021, and rising in the second half of the forecast period to average $7.20/mn Btu in 2024.

The agency was less explicit about Asian and North American prices but it did indicate that the oil-linked Japanese Crude Cocktail (JCC) price for LNG should stay around an average of $8/mn Btu, and spot LNG prices on the whole remain below that level. The price of gas at Henry Hub is assumed to average below $3/mn Btu until 2024 given a continuing onslaught of US shale gas, especially the price insensitive associated gas that is a by-product of tight oil production. 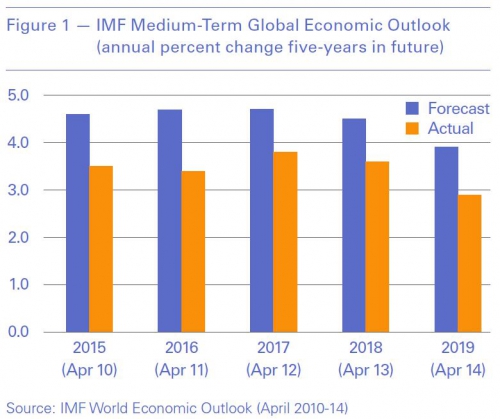 Based on these price assumptions, it appears the IEA believed the global gas glut would be relatively short-lived – roughly a year – and shallow. In fact, it already is much deeper than assumed by the IEA, partly owing to the previously mentioned short-term factors, and it is likely to last much longer than a year for reasons discussed below. The TTF price in Europe is already below $3/mn Btu; the SP Global Japan Korea Marker (JKM) spot price slightly above that and Henry Hub below $2/mn Btu.

For example, the IMF’s initial five-year out forecasts for global economic growth, as found in the April issues of its bi-annual World Economic Outlook from 2010 to 2014, on average over-estimated growth by over 1 percentage point for the years 2015 to 2019, with forecasting errors consistently positive and ranging between 0.9 and 1.3 points (Figure 1). The IMF over-estimated in particular the all-important economic growth of China, especially when it came to gas consumption, by an average of almost 2 percentage points over the same years.

The IMF has since significantly downgraded its five-year out forecasts for global economic growth – by roughly 1 percentage point – but they are still likely to be too high as geopolitical and economic rivalry between the major powers continue to heighten. In the April 2019 issue of its World Economic Outlook, the IMF forecast the global economy to grow by 3.3% in 2019, 3.6% in 2020 and 3.5% in 2024. In its January 2020 update, it had already downgraded these forecasts by 0.4, 0.3 and 0.1 points, respectively.

The global economy grew an average of 3%/year during the 1947-91 Cold War, a rate of growth that seems plausible as we enter a new Cold War. Adjusting for this lower rate of global economic growth, and assuming gas is hit on a proportional basis compared with energy demand as a whole, global gas demand would rise by 336bn m³ to 4.28 trillion m³ over the 2018 to 2024 period, not by the 392bn m³ as forecast by the IEA in Gas 2019.

The IEA has probably overestimated the amount of gas consumption and/or gas imports for China and Europe in the medium term, slower economic growth aside, because the agency only considers energy policies in place at the time of writing the report. In fact, energy policies can be highly dynamic, which should be no big surprise given their three main drivers: economic, environmental and security of supply. 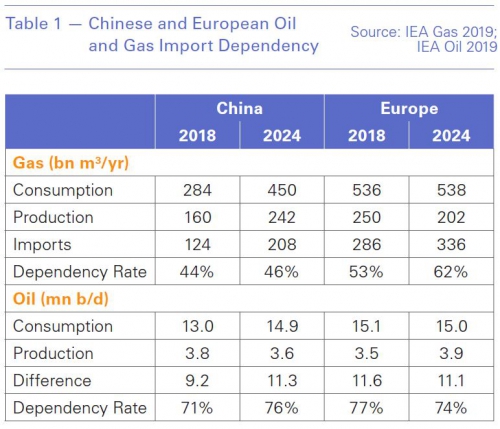 Security of supply should be a much more important driver for energy policy for both China and Europe over the medium term than assumed by the IEA as the international order becomes increasingly competitive. Something similar could be said for environmental issues in Europe, and rising economic concerns in China.

The IEA forecasts China’s gas import dependency rate to increase 2 percentage points to 46%, with strong growth in gas demand somewhat offset by rising domestic production. The IEA is forecasting European gas demand to be basically flat over the period, but the region’s gas import dependency rate to jump 9 points to 62% thanks to the phase-out of Groningen production in the Netherlands and declining production from North Sea fields.

Since December, the Chinese government has taken a number of steps to increase domestic gas – and oil – production to mitigate the cost of gas imports and improve energy security. These include: major changes to the top ranks of state-owned CNPC and Sinopec; opening the upstream to foreign drillers; plans to consolidate the country’s oil and gas pipelines under a new firm to allow greater access to a growing number of producers; and the opening of new regions to shale gas exploitation. Among these is the landlocked Guizhou province in the southwest of the country.

China’s rate of economic growth has been almost halved since the global financial crisis – to around 6%/yr – and this is despite all levels of government relying heavily on public and private sector debt in an attempt to bolster it. Chinese non-financial sector debt has nearly doubled to 300 percent of GDP since 2010, while the IMF is forecasting China’s general government deficit to be 6.3% of GDP in 2020.

The situation might not be as dire for China’s foreign accounts, but the trends are certainly in the wrong direction, especially since the US president, Donald Trump, ignited the Sino-US trade war. China’s current account surplus declined to a mere 0.4% of GDP in 2018 – and an estimated 1% in 2019 – compared with 2.7% as recently as 2015. The country’s foreign exchange reserves have declined from an all-time high of $4 trillion in early 2014 to $3.1 trillion presently.

At the same time, the European Union (EU) appears to be rethinking natural gas as a bridge fuel to a low carbon future, with leaders recently signing off on a pledge to achieve “climate neutrality” by 2050. Last year, the European Commission included 32 gas-related projects on a list of energy infrastructure projects eligible to receive EU funding to support the continent’s energy transition.

Based on recent comments by European politicians, including EU energy commissioner Kadri Simson, projects that improve gas connectivity on the continent likely will receive EU funding in the future given ongoing concerns about the security of Russian gas, whereas long-life LNG regasification projects are unlikely to.

Finally, the IEA has potentially underestimated the amount of new gas supply coming online over the 2018-24 period, as it chose to ignore Qatar’s announced plan to significantly expand LNG liquefaction capacity as state-owned Qatar Petroleum (QP) had not yet made a positive final investment decision (FID) at the time the agency wrote its medium-term outlook.

In 2017 and 2018, QP indicated plans to increase its LNG production capacity from 77mn mt/yr to 110mn mt/yr – 105bn m³/yr to 150bn m³/yr – by 2024, and in the process retake pole position as the world’s largest LNG supplier from Australia. In November, QP announced plans to boost LNG liquefaction capacity by a further 16mn mt/yr by 2027, as it has started engineering work on two additional “mega trains.”

On February 16, Reuters reported QP had delayed selection of western partners for the initial phase of its LNG expansion from this quarter to the second half of the year, but this need not have a significant impact on the timing of these four liquefaction trains.

Qatar is the world’s low-cost gas and LNG producer courtesy of its massive North Field, with confirmed reserves now exceeding 1,760 trillion ft³, not to mention the profitable condensates. QP would prefer to share the risk and have the marketing support of western oil companies, but has indicated it will go it alone if need be, having already awarded contracts in the first half of last year to expand domestic gas production. Qatar has the financial wherewithal to do so, as its sovereign wealth fund presently holds $320bn.

Speaking at the Oil & Money conference in London in early October, the head of QP, Saad al-Kaabi, said the first train of the initial phase is on track for 2024, with the other three to come online at intervals of three to six months thereafter. In contrast, the IEA is forecasting Qatari gas production to increase a mere 4bn m³ to 175bn m³ between 2018 and 2024.

To conclude, the global gas glut has hit sooner and harder than expected, largely owing to Covid-19 and a lack of heating demand retarding consumption and swelling inventories on a seasonal basis. Barring prolonged supply curtailment by major producers such as the US, it will take time to bring down these inventory levels, especially as the last round of LNG liquefaction projects continue to bring on significant new capacity this year and next.

Regional gas prices should gradually increase from their currently uneconomic levels, but a more significant rebound is unlikely before the second half of 2022. A more bullish price environment could be relatively short-lived, however, with lower than expected global gas consumption and imports, and a new round of Qatari LNG projects coming online beginning in 2024.