The rise of the electrons [NGW Magazine]

Even Covid-19 could not stop the inexorable advance of renewables. That was the conclusion in International Energy Agency’s (IEA) Renewables 2020 report released November 10, covering the period 2020 to 2025. Even though energy demand is expected to decline by 5% in 2020, renewables carry on increasing, with global demand expected to grow by 1% by the end of the year. Reflecting on this, IEA executive director Fatih Birol said: “Renewable power is defying the difficulties caused by the pandemic, showing robust growth while other fuels struggle.”

The success of renewables in 2020 is concentrated in the electricity sector. Their contribution to the heat and transport sectors actually went down, mainly as a result of lower economic activity. Most reductions were in transport and were close to 12%. These are sectors that will continue to depend on oil and gas for a long time to come.

Renewable capacity additions are expected to increase by about 4% in 2020, driven by China, Europe and the US. And there is more to come in 2021, increasing by close to 11%, with India and the EU leading the surge (Figure 1). 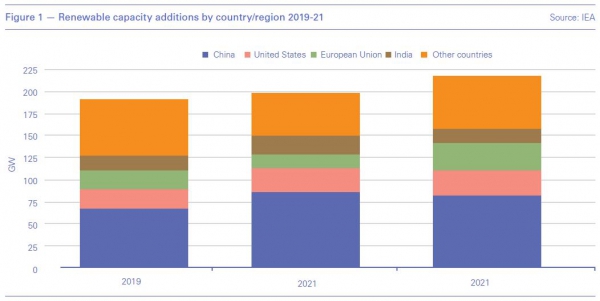 According to the IEA, since 2010 solar power capacity has increased by 18 times and wind power by four times, prompting Birol to say: “I see solar becoming the new king of the world’s electricity markets.”

Solar PV and onshore wind are the cheapest ways of adding new power-generating capacity in most countries today. But further cost reductions and sustained policy support, as more countries commit to net-zero by 2050, are expected to maintain strong renewables growth to 2025, the period covered by the report (Figure 2). By then renewables are expected to supply about one-third of the world’s electricity.

According to the IEA, by 2023 total renewable installed capacity will exceed that of natural gas and by 2024 it will overtake coal capacity, with renewables becoming the largest source of electricity globally. Hydropower will continue being a major source of clean electricity. 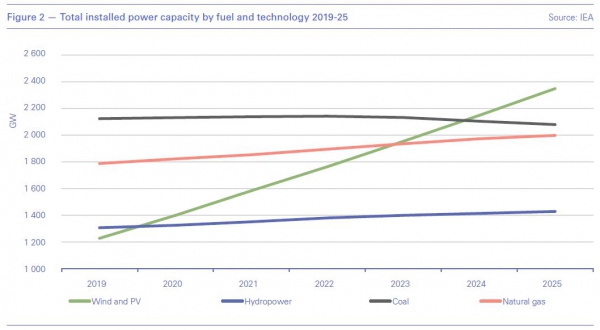 By 2025 solar PV will account for 60% of renewable capacity additions, followed by wind with 30%. But the IEA warns: “The rapid growth of variable renewables around the world calls for increased policy attention to ensure they are securely and cost-effectively integrated into electricity systems.”

The importance of secure electrical systems was highlighted in IEA’s latest report on that topic, Power Systems in Transition, released in October. It states: “The secure supply of electricity is of paramount importance. The power sector is going through fundamental changes: decarbonisation with fast growth in variable renewable sources, digitalisation expanding the surface for cyberattacks, and climate change leading to more extreme weather events. In response, governments, industries and other stakeholders will need to improve their frameworks for ensuring electricity security through updated policies, regulations and market designs.”

The IEA states that increased policy certainty, especially in key markets, can boost renewable deployment by as much as a quarter in 2022, over and above the base case. China could contribute as much as 30% of this.

This, and robust financial performance, is making publicly listed renewable equipment manufacturers and project developers attractive investment options despite the impact of Covid-19 and the dire economic outlook. So far this year they are outperforming the oil and gas sector by far. By October, in the US, NextEra, a major renewable energy company, overtook ExxonMobil to become the most valuable US energy company by market value – although this is possibly a temporary state of affairs that a higher oil price will reverse.

And as more governments globally commit to a net-zero future, the investment in electrification and wind and solar projects is bound to carry on increasing. Birol emphasised the importance of government policies in promoting renewables: “Governments can tackle these issues to help bring about a sustainable recovery and accelerate clean energy transitions.”

The ascent of the Democrat president-elect Joe Biden in the US, and his pledge to rejoin the Paris Agreement and to eliminate carbon emissions from the power sector by 2035, will have far-reaching impacts on green energy in the US and worldwide. Combined with similar policies in Europe, Biden’s policies will affect the future of energy globally – given that between them the US and the EU consume more than 30% of the world’s energy.

Impact on oil and gas

In Europe most major oil and gas companies have announced ambitious emissions reduction targets, including net-zero by 2050, and are increasingly involved in renewable electricity as equity investors, developers and off-takers of power. Oil producers in the US and the Middle East have yet to announce significant renewable energy targets. But all state that oil and gas production and sales are expected to remain their primary business activity in the foreseeable future.

Natural gas additions to power capacity are slowing down. The danger is that as renewables expand and decarbonisation bites, natural gas becomes economically and environmentally untenable within the power sector.

This is what prompted Jonathan Stern, director Oxford Institute of Energy Studies (OIES), to say at the Energy Intelligence Forum webinar in October that “in electricity renewables have won the battle in Europe.” But he added that “in industry and buildings natural gas is still key.”

In Asia, population growth and continuous improvements in living standards mean that renewables alone cannot catch up with the expected growth in energy demand.

All energy sectors other than electricity will depend on oil and gas well into the future. According to the ‘stated policies’ scenario in IEA’s World Energy Outlook 2020, fossil fuels will still be providing 73% of global primary energy demand by 2040, with global natural gas demand actually growing by 30% over the same period. Even in its ‘sustainable development’ scenario – designed to achieve the Paris Agreement goals – fossil fuels account for 56% of global primary energy by 2040.

Even with the rapid growth of renewable power, IEA’s Global Energy Review 2020 concludes that natural gas is critical to operations in all sectors worldwide, including industry, residential and services heating, and even electricity supply. Post-Covid-19 gas demand growth has returned in China. By the end of the year it is expected to be 4.2% up on 2019.

That is why despite the rapid growth of renewables, almost four fifths of the energy consumed last year globally still came from oil, natural gas and coal.

Ultimately the future of natural gas will depend on maintaining competitiveness against other fuels and against increasingly cheaper renewables. But it also depends on reducing its carbon footprint – especially the elimination of methane emissions.