The Middle East And The Geopolitics Of The Energy Transition: Myths And Realities

A look at today’s energy mix provides a sobering reminder that oil, gas, and coal continue to dominate the global energy system. This is important to remember when considering the energy transition – the attempt to achieve a net-zero emissions energy system by 2050 in the effort to keep the increase in the global average temperature well below 2°C. With the energy sector accounting for over two-thirds of total greenhouse gas emissions - ~32 gigatonnes of carbon dioxide equivalent (Gt CO2e) – oil and gas have become primary targets for emissions reduction and policy action.

At the same time, renewables and energy storage (batteries), non-carbon energy carriers (hydrogen), and carbon abatement technologies have become core features of net-zero roadmaps. This makes sense. The cost of renewables has declined over 80 per cent in the past decade, making the levelized cost of producing renewable energy cost-competitive against fossil fuels; likewise, battery cell costs have halved over the past five years from $230/kWh in 2015 to $110/kWh in 2020. The growing electrification of the energy system—where electricity consumption is expected to grow from now until 2040—will undoubtedly drive greater inter-fuel competition, particularly as renewables and gas assume a greater share in the global energy mix. 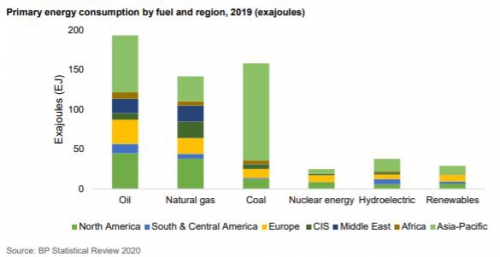 However, the pathways to net-zero will be far from smooth.

While renewables are scaling up and investment flows are growing, there are pockets of demand which renewables won’t meet (e.g., aviation and maritime transport). Likewise, full deployment of wind and solar and rapid take-up of electric vehicles will not be enough to keep global warming under 2°C. Carbon-abatement technologies for hard-to-tackle and emission-intense sectors such as steel remain in their infancy.

Indeed, the cost competitiveness of CO2-abatement technologies is not a done deal. For batteries, while cell chemistries and design have improved significantly over the past decade (helping improve energy density), the ‘energy transition’ is also a ‘commodity transition’, increasing demand for metals such as nickel, lithium, cobalt, and manganese. With the majority of a cell cost made up by the cathode, raw material input cost sensitivities remain key issues, particularly given the challenging outlook for raw material balances over the next several years.

Likewise, for other critical technologies such as carbon capture and storage, full-cycle costs remain well above current carbon prices, inducing the need for further policy intervention.

For gas, while its share in the energy mix is set to grow through 2040, decarbonizing the value chain remains key, particularly given the role of methane leakages (more harmful than CO2) and the need to remain relevant as a transition fuel. With major LNG-importing countries such as Japan setting net-zero targets, major utilities such as Tokyo Gas and JERA will pay a premium for low-carbon LNG—creating new winners and losers in the market.

Finally, while absolute oil demand is expected to decline from 2035–2040, the pattern of oil demand will shift by product and across geographies, creating new trade flows, price dislocations, and geostrategic outcomes. As an example, while gasoline and fuel oil enter structural decline, demand for liquefied petroleum gas, naphtha, and ethane is expected to grow as petrochemical demand grows over the next decade.

In this light, attempts to attach neat path-dependent outcomes for countries based on their economic profiles, energy mix, and the shifts likely to take place over the next 30 years appear simplistic. The energy transition will be neither geopolitically neutral nor predictable in its outcomes.

Oil underpins the economies and political structures of the Middle East. Besides being the world’s largest net crude exporter, the region hosts almost half of the world’s proven oil reserves and more than a third of its gas reserves. The region also remains one of the most energy-intensive regions globally: strong population growth, subsidies, and power demand for cooling and desalination all remain key drivers.

The region’s role as a major oil and gas exporter has also shaped its geopolitical status in the following ways:

Against this backdrop, assumptions that Middle East countries will be the ‘big losers’ of the energy transition (Yergin, 2020) appear premised on the following assumptions:

While it cannot be denied that tighter margins, a lower oil price outlook, and the prospect of volatile oil cycles risk eroding the region’s geopolitical status, the strategic fortunes of the region are likely to be more nuanced. No region is standing still as the forces shaping the energy transition take root.

The Middle East is no exception.

One of the transformational impacts of the COVID-19 crisis has been the decimation of upstream oil and gas capital expenditure (capex). The year 2021 is expected to see approximately $315 billion in upstream spend, almost 30 per cent lower than pre2019 levels and 60 per cent below 2014’s peak of $752 billion.

Likewise, 2020 saw European oil majors announce net-zero roadmaps, devising carbon-neutral asset portfolios aligned with the goals of the Paris Climate Agreement. These efforts are not necessarily being driven by peak oil demand anxieties, but rather by investor demands. BP, for example, has announced an ambitious target to cut its oil and gas production by 40 per cent (1.1 million barrels per day) over the next decade and ramp up its renewable portfolio, with the aim of reaching 50 GW of capacity by 2030 (from 2.5 GW today). Likewise, Total outlined a ramp-up in installed renewable capacity from 7 GW today to 35 GW by 2025. Long-term stable returns brought by renewables (and zero short-run marginal costs) are also playing their role in this capital allocation shift.

Likewise, the Abu Dhabi National Oil Company (ADNOC) has plans to allocate $122 billion over the next five years to reach its target of 5 million barrels per day by 2030. In the gas sector, Qatar’s North Field Expansion will also raise capacity from 78 million tonnes/year to 126 million tonnes/year over the next decade. These capacity expansions are also taking place at a time when innovative project financing mechanisms are being developed to raise capital both to extract value from productive oil and gas assets and to develop new energy financing tools (helping ease reliance on export earnings). ADNOC’s sale last year of its midstream asset gas pipelines was one example (and is expected to be followed by a similar move by Aramco).

However, while the call on both Saudi and OPEC crude is expected to increase over the next decade, not all Middle East producers will necessarily benefit. In a world of carbon border taxes and rising (fixed) carbon prices, the carbon efficiency of Middle East upstream oil and gas will be a key metric of competition. It is widely known, for example, that Saudi Aramco has the second-lowest carbon intensity – greenhouse gas emissions per unit of energy produced - in upstream operations globally (~4.6 g CO2e/MJ)—a result not only of effective flare management techniques but also of integrating solar in oil and gas processing and the low water cut per barrel produced (reducing energy-intensive practices such as recycling produced water). This is likely to benefit the future competitiveness of Saudi Arabia’s largest export stream, Arab Light. In comparison, Iraq’s oil and gas production is one of the most emission-intense globally, with an average carbon intensity of ~15 g CO2e/MJ, largely driven by high gas flaring rates (over 18 billion cubic metres per year) and water cut per barrel produced.

Beyond competitive production costs and carbon efficiency, the energy transition will also accelerate competition over Asian market share—the future axis of demand growth. With COVID-19 having already accelerated the rationalization (and closure) of west-of-Suez refining capacity, competition between Middle East exporters will intensify in Asia, a dynamic likely to test the marketing arms of Middle East national oil companies. This year’s launch by the UAE of a new futures contract (Murban ICE) and the expansion of Middle East trading desks are examples of innovation in the attempt to capture strategic opportunities in a highly dynamic physical oil market. Examples of the energy transition’s creation of opportunities for these trading arms include physical swaps, third-party trades and optimization opportunities (particularly for those with extensive storage and distribution networks across the region).

Reality #2: the geostrategic role of gas in the Middle East will grow

Gas will play a greater role in the Middle East energy sector. Saudi Arabia is pushing forward with unconventional gas development at South Ghawar and Jafurah, helping displace liquids in the power sector; likewise, ADNOC has put forward plans to increase its own gas security (increasing negotiating leverage as pipeline contracts come up for expiry, e.g., Dolphin in 2032).

Iraq, both a major gas flaring country and an importer of gas, has entertained the prospect of importing surplus gas from Kurdistan (Khor Mor) as well as developing non-associated fields in western Iraq and Diyala province. A more competitive oil market under the energy transition and rapidly rising power needs (for cooling as temperatures rise, to serve a growing population, and to meet massive pent-up demand on a per-capita basis) could incentivize Iraq to bury political differences in favour of improved energy resilience.

While these trends point to the growing role of gas as a tool for building resilience in the Middle East as oil margins come under pressure, a more direct example of growing geostrategic power can be found in Qatar.

As previously mentioned, Doha’s geostrategic leverage will not only grow as gas increases its share of the energy mix; more importantly, the decarbonization of the gas value chain—supporting gas’s role as a transition fuel and building new demand centres in a world aspiring to net-zero emissions—will be crucial.

In this light, Qatar Petroleum’s development of carbon capture and storage projects (with plans to sequester more than 5 million tonnes by 2025) and solar power at the new trains at the North Field Expansion will give Qatar further leverage and market power. One example of this was the deal signed late last year between Singapore’s Pavilion Energy and Qatar Petroleum’s trading unit for 1.8 million tonnes per annum of LNG for 10 years starting in 2023. Singapore’s request that cargo deliveries also include wellhead-port greenhouse gas emissions signals a future trend—placing Qatar in a highly competitive position, not only as the lowest-cost producer but also due to its ability to negotiate premium contracts as it seeks to place volume in the market.

The Middle East has not been standing still as the energy transition gathers pace.

Notwithstanding ADNOC’s transformation since 2017 (concession restructuring, privatization, asset capitalization), the UAE has made strategic bets on hydrogen (blue and green), expanded its footprint in green energy financing deals, and expanded its carbon capture project pipeline (where it currently captures around 800,000 tonnes per year for enhanced oil recovery purposes).

Within Saudi Aramco, the establishment of a division focused on ‘technology tipping points’ signals the company’s alertness to emergent technology trends, key not only to the Kingdom’s hydrogen strategy but also to its circular carbon economy approach. Renewables are central to this approach. With plans to have 50 per cent of its energy mix covered by renewables by 2030, this will support Saudi energy flexibility and lay the cornerstone for new industries.

US and European anxieties about China’s dominance over the battery supply chain could benefit some Middle Eastern countries. For example, cathode precursor chemical production is currently dominated by Chinese refiners (particularly lithium hydroxide). With the EU currently planning to build out significant battery cell capacity out to 2030, geopolitical pressure to reduce reliance on China will grow. As a result, Saudi Arabia and the UAE could become either major battery chemicals hubs (serving European cathode plants) or cathode manufacturers themselves. Not only do countries such as Saudi Arabia and UAE have low reagent (e.g., sulphuric acid) costs but also benefit from well-capitalized financial systems and strategic industrial support – especially given the importance placed by these countries on new sources of taxable revenue and job creation.

Originally publishes by the Oxford Institute For Energy Studies.