The International Investment Forum for Attracting Foreign Investments to the Oil and Gas Sector of Turkmenistan (OGT-2022) opened at the “Yyldyz” hotel in Ashgabat and Turkmenistan’s pavilion at World Expo in Dubai. The Forum is organised by the State Concerns «Turkmennebit», «Turkmengas», «Turkmenhimiya» and State Corporation «Turkmengeology» in partnership with Turkmen Forum and UK-based GaffneyCline. 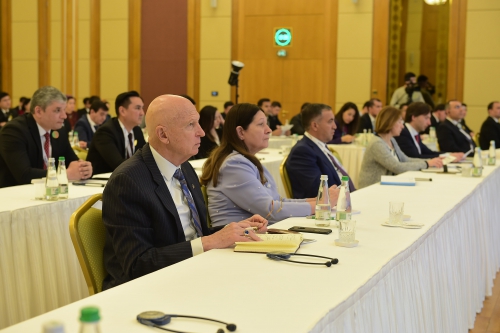 The prestigious event will be carried out both in traditional and online formats. It aims to attract foreign investments to the energy sector of Turkmenistan, and to develop and strengthen collaboration between the national energy companies of Turkmenistan and international partners.

The Forum will be opened by the welcome address of newly elected President of Turkmenistan, His Excellency Serdar Berdimuhamedov. The first day of the Forum will cover two, plenary and first sessions of the agenda. The plenary session will focus on the future of global energy and will see keynote address by the State Minister, Chairman of the State Concern «Turkmengas», plus speeches by Elshad Nassirov, Vice president of SOCAR; Huang Yongzhang, Vice-President of CNPC and President of PetroChina; HE Mohammad Sanusi Barkindo, Secretary General of Organization of the Petroleum Exporting Countries (OPEC); Guy Lentz, Secretary General of the UN Secretary-General for Central Asia, Head of the UN Regional Centre; Natalia Gherman, Special Representative of the United Nations Regional Centre for Preventive Diplomacy for Central Asia (UNRCCA); John MacGregor – Head of the Organization for Security and Co-operation in Europe (OSCE) Centre in Ashgabat, Tim Gould, Chief Energy Economist of the International Energy Agency (IEA); and Dmitry Shlapachenko, the United Nations Resident Coordinator for Turkmenistan. 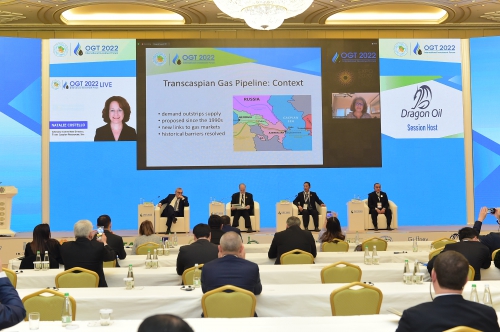 OPEC remains focused on being a reliable supplier of oil to global market. It is on its “final stretch” of returning about 5.8 MMbopd to global markets. According to the Secretary General of the organization, the main focus should remain on decarbonizing hydrocarbons and other sources of energy. By 2045, still more than 50% of energy demands will be met by oil and gas, he predicted and they cannot afford not to continue to invest and produce energy to meet this demand.

Energy security is the goal many countries are pursuing to ensure that their economies function without interruption. Turkmenistan, possessing one of the largest energy potentials in the world, strives to establish stable structure of the global energy security, which is built on the principles of justice, balance of interests of both supplying countries and transit countries and consumers.

The country considerably increased production rates of fuel and energy resources; transport routes of energy are being diversified. At the same time, the role of Turkmenistan in supply of energy to the world market grows and determines the level of its geopolitical influence.

It is worth mentioning that diversification of transport infrastructure, which is able to supply energy resources via network of multiple-choice pipeline system, is a strategy priority for Turkmenistan. In this regard, the construction of the promising 4th line of the Turkmenistan-Uzbekistan-Kazakhstan-China gas pipeline is in demand and is capable of strengthening energy security in a vast area.

The second day of the Forum will cover several more sessions starting with the second session entitled “Opportunities for new era energy investment projects”, where Guychgeldi Baygeldiyev, Acting Chairman of SC “Turkmennebit” will give his keynote address. 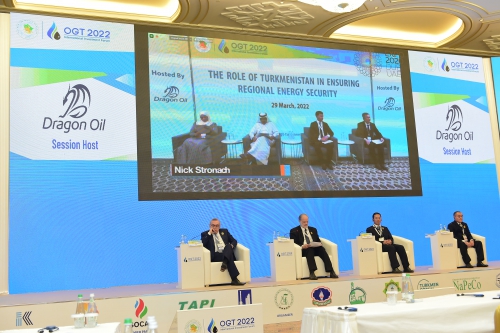 The session will also see the presentations of Serdar Nuryagdyev - Senior Geophysicist of SC “Turkmengeology”, Scott Foster – Director of UNECE's Sustainable Energy Division and others

Experts will consider importance of the global transition towards “green economy” with lower fossil fuel consumption and greenhouse gas emissions.

Turkmenistan is planning to implement Roadmap for the development of international cooperation in the field of hydrogen energy for 2022-2023, that will allow building a new industry in a short period of time with a significant multiplier effect for the Turkmen economy. National Strategy for the Development of Hydrogen Energy will involve international think tanks and research centers.

Government investment, instead of being the primary source of financing, should play a supportive role in fostering a healthy environment for renewable energy projects to attract more private investments.

In this context, role of financial institutions in supporting sustainable energy will be discussed in Session 3.

In 2021, Turkmenistan signed the agreement on financing the construction of a hybrid solar-wind power plant with a capacity of 10 MW worth 25 million US dollars with Abu Dhabi Development Fund. This project will be covered in detail during the Forum.

Reducing methane and CO2 emissions, reduction of flaring to meet net zero will be covered during the session “Innovative technologies and know-how in the production of hydrocarbons and reducing associated gas emissions”.

Energy transition has caused a new round of technological innovations. R&D in clean energy plays a key role in global green revolution. These themes will be covered in the presentations of Bayrammyrat Pirniyazov, Director of Scientific-research institute of natural gas under the SC “Turkmengas”, who will deliver a keynote address. Bayrammyrat Atamanov, Rector of Yagshygeldy Kakaev International university of oil and gas; Kamel Ben-Naceur, 2022 SPE President; Jonathan Stern - Professor, Distinguished Research Fellow & Founder of the Natural Gas Research Programme at Oxford Institute for Energy Studies and some other distinguished speakers will present their speeches at this session.

Several international organizations, including the European Bank for Reconstruction and Development have demonstrated great interest in supporting Turkmenistan in exploring possible technical and economic options for resolving this phenomenon and stop methane emissions.