The IEF’s method for methane [Gas in Transition]

Since this feature appeared in the September issue of our Gas in Transition magazine, the IEF has published its report on methane measurement methodology, which can be read here. Leila Benali has also been appointed Morocco's minister of energy transition and sustainable development

The International Energy Forum (IEF) is creating a new methodology for quantifying emissions from the energy industry, its chief economist tells NGW in an interview, with a white paper on the initiative due to be published in early October.

The Riyadh-based international organisation, comprised of energy ministers from 71 countries including both major producers and consumers of energy, launched the initiative in June, in partnership with data analytics company Kayrros. It held its first workshop with members the same month.

While the importance of addressing energy sector methane emissions is widely recognised, quantifying them accurately is difficult. What is even more difficult is reaching a consensus among stakeholders on the methods to use, and this ultimately hinders efforts to reduce them. This is a hurdle that the IEF is looking to overcome.

“There is a clear absence of a widely endorsed and standardised methodology for methane emissions in the energy industry,” IEF chief economist Leila Benali says.

The biggest discrepancies are found when comparing results from using so-called top-down and bottom-up methods for quantifying emissions. Top-down methods refer to the use of aircrafts and increasingly satellites to quantify methane in the atmosphere, whereas bottom-up methods refer to ground-level investigations, including the leak detection and repair (LDAR) cameras.

Both types of methods have merits and limitations. Top-down methods, for example, lack detail about individual sources but can provide comprehensive information about emissions on a broader scale. Satellite data can also flag up major, unexpected emitting sources that might have otherwise been missed. But it does not work offshore or in equatorial regions because of sensor reflectivity, and there can be issues with separating out emissions from different sectors. 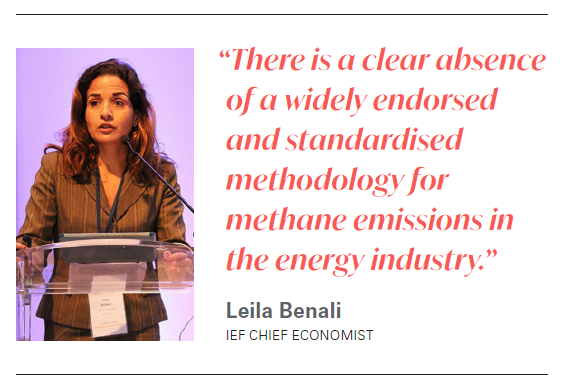 Bottom-up methods can more accurately quantify emissions from an individual facility or device, and then a representative sample of such units can be used to quantify emissions across the oil and gas industry. But limitations on how much infrastructure can be inspected can mean that significant, unexpected sources of emissions can be overlooked.

Top-down methods typically indicate emission levels many times higher than the estimates made from ground-level surveys. This why the IEF is pursuing an “inclusive approach”, to determine emissions as accurately as possible, Benali says, “but more importantly we are looking for acceptance of the most cost-effective methodology by all the stakeholders.” The forum intends to pair publicly available satellite data from the European Space Agency’s Copernicus programme with an inversion model and ground-level context.

“We are definitely aware of the limitations of using raw satellite data alone,” Benali says. “It can be obstructed or even distorted by large bodies of water like oceans and lakes, high humidity clouds, meteorological conditions. You have geographic abnormalities, you have temporal issues. It is also difficult sometimes to discern when there is overlap with other potential sources like agriculture. It is very difficult to accurately measure over wetlands, snow and along the equator.”

Meanwhile ground-level quantification is costly and time-consuming, and not IEF members can afford such expensive monitoring campaigns.

“Neither top-down or bottom-up estimates are perfect on their own, but we want to reconcile the methodologies and we want to bring in region specific operational data modelling and artificial intelligence,” she says.

The goal is to provide the forum’s members with a methodology that can help them present credible national climate plans ahead of the UN Climate Change Conference (COP26) in November.

There are significant developments in methane regulation on the horizon. The European Commission is currently drafting new requirements on detection and mitigation of methane emissions in the oil and gas industry, and aims to publish a legislative proposal later this year. The US government is also working on introducing new rules on energy sector methane emissions.

Besides penalties for non-compliance with standards, regulation needs to provide incentives that bring about better technologies to quantify methane emissions more accurately, Benali says. The improved and larger volume of data resulting from this technology would in turn better inform future regulation.

Amid unprecedented uncertainty about future levels of oil and gas demand, Benali says there is a risk of underinvestment in energy supply. She points to difficulties in accessing capital, although she rejects that this is only the result of investors having concerns over the sector’s climate impact.

“There is a myth that investors have been abandoning the sector because they’re so concerned about ESG risks and stranded assets,” she explains.

Instead, while the industry remains an attractive one for investors, lower shareholder returns over the past decade have made it more difficult to obtain financing. But the situation has improved recently, as investors have been enticed back to the industry through promises of relatively stable dividends and returns on capital.

A number of the world’s biggest oil companies announced lower dividends in the wake of the pandemic, but have since increased them again and resumed buybacks. Many of those companies have pledged to scale back oil and gas investment and spend more on renewables and other clean energies.

“I don’t think we can rely on the traditional funding models for clean energy R&D,” Benali says. “There needs to be an understanding of what type of technologies are available today, the new technologies that need to be developed tomorrow, and the new funding models will need to accompany that.”

She called for policymakers to create more frameworks for diversified financing of technology R&D. “Financial markets have to become more mature in many parts of the world,” she says.

“The second area that is definitely overlooked is domestic energy pricing transparency,” she continues. “It’s critical to de-risk policy and encourage investments and funding, but we want to get away from the traditional bashing of energy incentives. But if we can standardise how you price energy across the world, including carbon accounting, in domestic pricing and energy trade, that will increase transparency.”

New business models are needed for new clean fuels like hydrogen and ammonia, she says.